Susan Morrison-Dyke and Anthony Dyke took cues from nature for their latest exhibit. 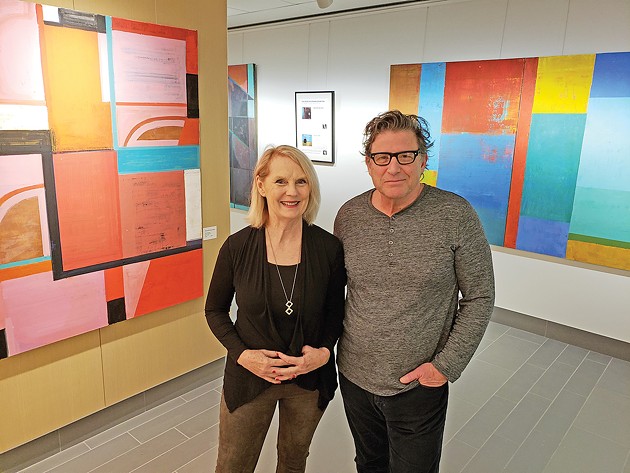 Inspirations from Nature, an exhibition of paintings at Myriad Botanical Gardens, probably isn’t what you think.

“Just painting a flower is so obvious,” said Susan Morrison-Dyke, one of the two featured artists. “We wanted it to be so much more poetic.”

“This was really meant to reflect the architecture of the new space,” Morrison-Dyke said. “Incorporating that with the natural elements of the botanical gardens so you’ve got colors that reflect organic forms and shapes and then the architectural, structurist, more formalist shapes. … The architectural space itself, just the scale. When you go see the show, when you walk in, it feels perfect for the space.”

The couple’s best known work, the six-panel mural at Chickasaw Bricktown Ballpark, is not particularly representative of their current styles, they said. Though her work typically explores the spatial relations of abstract figures, Morrison-Dyke said she draws inspiration from natural palettes.

“I just tried to use color really well,” she said. “Earth, slate, sky … there are natural elements in my work normally. … People have this idea that color is just bright and has to be out of the tube. No, color is a way of drawing. You create space; you create spatial depth with color. That’s what’s important with abstract painting, that you’re building the right tonality, the right colors, the way that you’re manipulating the space and it’s not all about being bright. Color has to be so subtle in the way that you use it, it’s a whole art in itself.”

While Morrison-Dyke’s style is more abstract, inspired by shape and color, Dyke said he does draw inspiration from reality.

“I come from more of a realistic kind of edge where the abstraction kind of evolves out of looking at something real out there,” Dyke said. “Sometimes I use a photograph or two to help structure something. … Whereas she’s more inventive with color, I base my color on what I’m looking at.”

Under the supervision of the two artists, a new hanging system was installed to display their paintings, about 25 in all, “mostly very big-scale paintings” as Morrison-Dyke describes them. The couple said they finished the paintings for the exhibition in about three months.

“We painted very diligently and quickly on this,” Morrison-Dyke said. “There are one or two in there we reworked for the show. I had done it for a show at Untitled about a year and a half ago. Everyone had to come up with work outside of their genre, and when I came up with that piece, it was more of a pop art piece, very abstract but pop art. So in order to reincorporate it back into the Myriad, I wanted to rework it a little bit; it’s more finished than it was when I showed it at  [Artspace] at Untitled.”

“Sometimes you’ll grab a canvas that you’re feeling ambivalent about, and you’ll work right over it and use layers underneath, and the surprises come out,” Dyke said. “That’s what keeps you going as a painter anyway is the element of surprise when you’re painting and really that’s the thing that engages the artist is to have that playfulness with it.”

For Morrison-Dyke, the reason to build off existing paintings is obvious.

“The scariest thing is a white, blank canvas,” she said. “So you go work into something you’ve already created; it’s like with writing — you already have so much in it. It’s a process. … Most of the greatest artists worked in series. You don’t get it right the first time.”

Also like writing, painting is a process that mostly takes place behind closed doors.

“The actual physical creation happens when you’re alone,” Morrison-Dyke said, “whereas with music and theater, the creation happens in front of people so the whole experience is different.”

The lack of feedback in the creation process makes them grateful that their paintings are hanging in the visitor center where she knows they’ll be seen.

“They have huge amounts of public coming in every day, so a lot of people are seeing it,” Morrison-Dyke said. “And that’s the best part of it; you don’t want to be in a place where no one ever comes in.”

The works are for sale, with a portion of proceeds benefitting Myriad Gardens Foundation, and selling art is another way to determine if it has an impact on the public,

“We’ve sold a few pieces from other shows out of there,” Dyke said, “and it’s nice because it’s just people that like what they see. The average person comes in and sees something and they like what they see, and they think it will look great in this room and so that makes you feel good because painting is an isolated tradition.”

The feedback is meaningful to both Dyke and Morrison-Dyke, who have 26 years, two art studios and countless joint exhibitions between them. Combining natural and architectural subjects allowed them both to work in their preferred styles.

“We were really excited when we found out we were going to have a show there because we could just do what our normal stuff would be because I’m more architectural and he’s more nature, landscape-oriented,” Morrison Dyke said. “I do think our work has gotten more similar in this show; it’s never been this similar.”

After so many years and so many shows, keeping their individual styles distinct might have become more difficult.

“If we wanted to, we could be more similar,” Morrison-Dyke said.

“I’m more naturalistic,” Dyke said. “We’ll do a figure drawing at the studio, and I’ll do my sketching, which is more naturalistic, more fluid, and she’ll do more of a stylized person. But I think when she does abstraction, it becomes harder to draw that line and see the difference.”

Morrison-Dyke will always offer her suggestions for color selection.

“Sometimes I’ll come in and be like, ‘Why did you ever put that purple next to that green?’” she said, “and he’ll be like, ‘Well I like it. I’m gonna keep it,’ and the next thing I know I’ll come back in, and he’s changed it.”

Inspirations from Nature is on display through Feb. 28. Admission is free. Visit myriadgardens.org.