Oklahoma is a landlocked state, but it is also home to many catfish farms. Dig into the succulent freshwater fish at these seven establishments when you have the craving.

While Cajun King is known for its overabundant buffet of Louisiana classics, its catfish won’t be found under a heat lamp because it is cooked to-order and brought to your table. The Catfish Almondine is covered in a light batter made with almond flour that is crisp and provides a little resistance to dig into the melt-in-your-mouth catfish center. 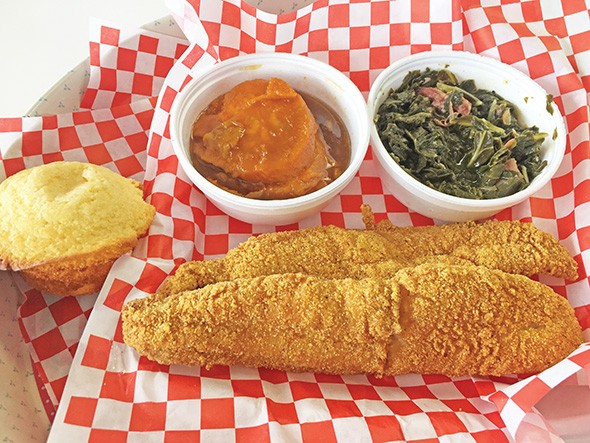 There are few deals better than Vesa’s catfish that comes wrapped in a smoky and spicy batter. Two pieces of fish with two sides and a sweet cornbread muffin will only run you $8.50 at lunch and $10.50 at dinner. Pair it with some sweet potatoes and it will be a meal on your mind for weeks to come.

Why keep the catfish all to yourself when you can order the crispy catfish appetizer at The Shack and split it among friends? But if you’re looking for an entrée portion, it offers a few preparations not found elsewhere in the metro. You can order it grilled or blackened and have the option to stuff it with blue crab and shrimp, and the Cajun stuffed version fries the filet stuffed with crabmeat and serves it atop a bed of dirty rice topped with blackened catfish.

For more than 10 years, Grill on the Hill has brought customers to Capitol Hill, and one of its signature dishes is fried catfish. It offers whole filets served with a choice of sides, and it has a spicy version on the menu that puts the heat in both the batter and the red-hot ranch sauce. The only downside is that Grill on the Hill is only open Monday-Friday, so you can’t get a weekend fix.

Off the Hook has a pairing that no other catfish place can offer: lobster cream sauce. Enjoy the crispy catfish with spicy rice, fries or cheesy grits for a meal that will quickly convert any new member into the #GetHooked church. You can also get a po’boy at Off the Hook’s original Britton Road location or as a sandwich at its south side spot.

Friday is the day of the week many people eat fish, and catfish specifically, partly from Catholic tradition but also because it’s the start of the weekend, and what better way to get the party started than tender, fried catfish. Olde Orchard offers catfish every day, but 5-8 p.m. Fridays, you can eat all your heart desires for $10.99.

Chef and owner Ken Mills brought the taste of New Orleans to the Oklahoma City metro, where he operates three C’est Si Bon locations that also include Edmond and Midwest City. Enjoy its signature catfish with a side of spicy tiger sauce in one-pound options or get a combination with a half-pound on a nice French roll in the form of a po’boy.