Oklahoma fast-food icons like Sonic and Braum’s have expanded across the country and have a spot in our hearts. What about some other overlooked restaurants serving food on the go?

We all know about Oklahoma fast-food icons like Sonic and Braum’s that have expanded across the country and have a spot in our hearts for eateries like Del Rancho and Taco Mayo that have multiple locations in the Sooner State. What about some other overlooked restaurants serving food on the go?

You won’t wonder why Neptune’s has been a Classen mainstay since 1974 once you take a bite into its pillow-soft bread. The fresh baked bread is the star of the show and can only be ordered through the drive-thru menu after 2 p.m. Order a supreme sandwich, no mayo, and ask for extra vinegar — it’s among the best sandwiches in the entire city.

The original location near Davis has been featured on all sorts of national food television programs, but there is no reason to drive all the way to southern Oklahoma to try the sweet fried pies when there is a location right in OKC. Pies are available in four categories: savory, fruits, cream and sugar-free. Savory flavors include broccoli and chicken and Polish sausage and potato. Make it a dessert with peach, blackberry or chocolate cream fried pies.

In service since 1956, Tim’s Drive Inn is a testament to doing things well. In the case of Tim’s, it’s the fried Indian taco, which is chili, beans, lettuce, tomatoes and onion piled high on a fluffy piece of Indian fry bread, and it’s only $5.49 on Wednesdays. Also try a chili coney dog or an onion hamburger combination that will only set you back $5.39. Just be sure to have cash on you; Tim’s doesn’t take credit or debit cards.

This former food truck has transformed an old Whataburger into some of the best burgers in the city. New owner Kris Standridge-Pedersen bought the business after founder Bryce Musick died of brain cancer in 2015 and kept a commitment to high-quality burgers and sandwiches. Order a Beanie Burger, which tops a single patty with bean dip, Fritos, jalapeños and chili or a Thunder Bird Sandwich: turkey breast with bacon, lettuce and tomato.

Since opening this summer, Taste of Korea has gained fans by offering authentic Korean food. Operating in the former Amy’s Noodle House, the drive-thru window works better as a takeout pick-up window. The dolsot bibimbap and a variety of hot pots, in addition to a variety of stews with rice dumplings, highlight the menu. 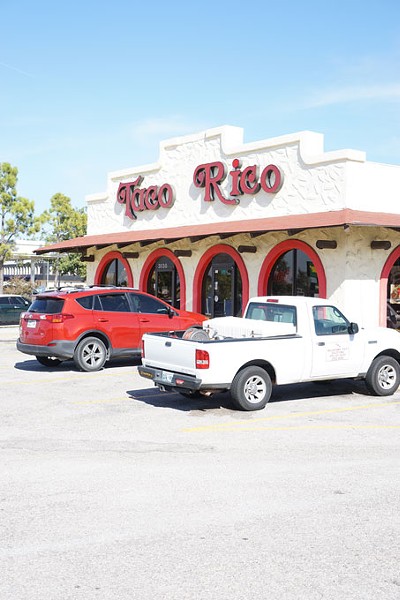 Just look for the anatomically correct bull outside to find one of the best spots for catfish and barbecue in the city. Owned by Frank Henderson, who you might remember from Broadway Ford in Edmond and the “that’s no bull” commercial, Beef & Buns, Mr. Catfish is only open Thursdays-Saturdays. However, the scarcity of its delicious barbecue and catfish only amps up the demand for when it is open. Choose from a variety of smoked meats, but its catfish and butter cookies are the real star of the show.

Taking over a former Taco Bueno, Taco Rico made its own name by offering both fast and fresh food out of its drive-thru window. You won’t find fresh tamales, chile rellenos or street tacos at a Taco Bueno or most quick-service Mexican restaurants. Order the Rico’s chips and dips where the trio of salsa, queso and guacamole is served in tiny chip dishes.