Here are the seven best places to try something new, whether it’s a drink or an entirely new establishment.

With spring approaching, there is a sense of renewal in the air. Venerable bars will be rolling out new seasonal cocktails, but it also seems fair to highlight new watering holes in the metro area. Here are the seven best places to try something new, whether it’s a drink or an entirely new establishment.

Much like its sister establishment The Pump Bar, The Bunker Club features a selection of daily cocktail specials, but this is put on full display on Tiki Tuesdays. Dive into some indulgent drinks like the Show Us Your Chi Chis, which is pineapple vodka, macadamia nut liqueur, cream of coconut and coconut water served in a coconut. The Bunker Club’s tropical drinks are a good way to beat the oncoming heat.

The group of talented mixologists turns out a new drink menu every season. Spring kicks off with the génépi and vodka-California Dreaming cocktail with vodka, cucumber, mint, fresh lime juice and sugar snap peas — green enough for St. Patrick’s Day. The Crimson & Clover (pictured) has novo fogo barrel-aged cachaca and raspberry preserves and is muddled with fresh limes and basil.

Admittedly, “craft” cocktails are not the stars of the show at Kat’s, which opened in September in the former By George’s location. Owner Kat Peckenpaugh places an emphasis on delivering a good selection of beer and spirits at a reasonable price in a smoke-free environment. Part of the statewide initiative Free The Night, Kat’s does not allow cigarette smoke inside. 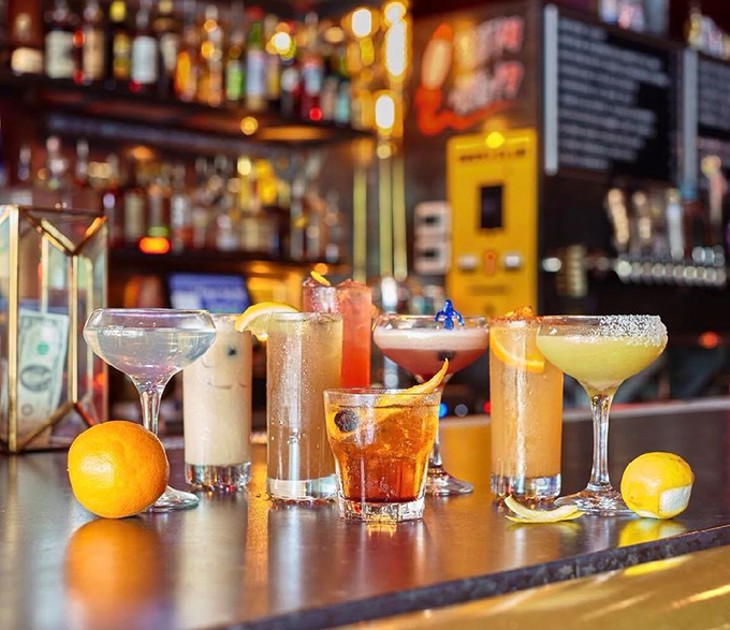 Since opening last summer, The Jones Assembly has become one of the best places in town to eat, drink and to see a concert. Led by head bartender Christine Brubaker, the bar turns out seasonal cocktails as well as permanent items like the PYT, which uses Oklahoma’s Prairie Wolf vodka, Luxardo maraschino liqueur, Mathilde peach liqueur, lemon and grapefruit.

Under the direction of food and beverage director Michael O’Hara, you’ll be hard pressed to find a bar staff more knowledgeable than the one at Mary Eddy’s. As the restaurant rolls out a seasonal menu in the next few weeks, grab a Movin’ to the Country made with Maker’s Mark bourbon, peach syrup, lemon, peach bitters, red wine float and amaretto meringue.

You might’ve been to the Scratch Kitchen in Norman or maybe even the one in Telluride, Colorado, but each location has a different food and drink menu. The newest concept, located in the new Pueblo development in the Paseo district, features 11 seasonal cocktails devised by consulting company Bittercube, which was founded by Norman native Ira Koplowitz. Try the Two-Timer with George Dickle Rye, chai tincture and cherry bark vanilla.