Pulled pork is a menu item that is immensely popular, but the difference between freshly smoked and pulled varieties and the overcooked and mushy versions can be vast. Make sure you get seven good versions with these seven restaurants.

By Jacob Threadgill with Gazette / file and submitted photos

It’s been an exciting 2018 for the Sunnyside Diner brand, opening a south side location on SW 89th Street in February and the MacArthur Boulevard location in April.  Sunnyside’s pulled pork is featured prominently in the Hillbilly Hash: barbecue pork and sauce over roasted potatoes topped with eggs. Also, get the pork with an omelet or inside the new Classen breakfast burrito with hash browns, eggs, pico and ranchero sauces.

Serving customers since 1910, Bill Kamp’s certainly has the reputation for a great selection of fresh, high-quality meats. Its daily takeout specials also have plenty of fans. Its Friday pulled pork sandwich is the most popular because it offers more than the usual with its Weepin Willie red cabbage spicy slaw. Regular coleslaw is available if you don’t want heat, and the pork is served with North Carolina vinegar sauce or a sweet version made in Oklahoma.

The Okie Pig has been a signature sandwich at Interurban since 1976. As the restaurant has expanded to include eight locations, the sliced pork sandwich has remained the same until recently. Management made the switch to pulled pork last week to promote a juicier sandwich. Its bright green dill relish is still a sandwich staple that makes it stand out from other pork sandwiches. It can be topped with hot sauce, barbecue sauce or both.

What started as a food truck has continued its success since opening a brick-and-mortar location in Bethany. MOB’s pulled pork is smoked for 12 hours with a combination of mesquite and pecan wood and is seasoned with a roasted garlic rub. It gets finished with apple juice for added sweetness. You can get pulled pork on its own sandwich, added to a grilled cheese or topped on a hamburger with the MOB Butcher sandwich. 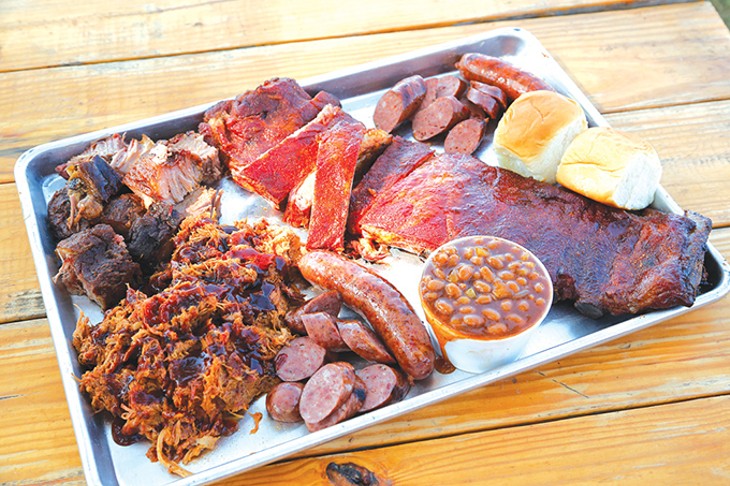 Good pulled pork is well worth a road trip. Father-son pair Levi and David Bouska, who appeared on the reality series BBQ Pitmasters in 2016, runs The Butcher BBQ Stand. Prepare for a weekend getaway as the bright red food trailer is only open Friday-Sunday. The Meat Locker ($32) includes a sampling of all eight meat varieties offered, but its pulled pork is a standout item well worth the trip. 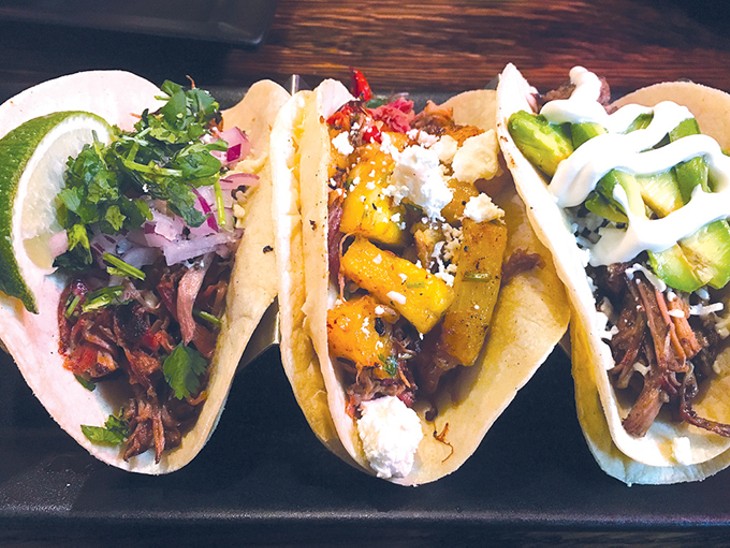 Chef Stephen Schmidt’s smoker nicknamed Norma Jean is on full display at Hacienda Taco. Whether it is the juicy brisket or pulled pork, there is plenty of smoky flavor in the meat not normally found at a Mexican restaurant. The al pastor is not the traditional sliced meat; instead, it’s a pulled pork that gets a boost from pineapple, roasted red peppers and feta cheese.

The menu is science-themed, but a pop quiz that ends with a baked potato topped with house-smoked pulled pork is much more fun than having to do equations. Psychology tops a fresh baked potato with hickory-smoked pulled pork. William Myles serves as pitmaster, bringing his Memphis roots with him to develop juicy pulled pork and an in-demand barbecue sauce for the restaurant owned by sons Kevin and Marcus.