One of Oklahoma City’s premiere date and friend-gathering destinations is 16th Street Plaza District. A big reason for that is the presence of Roxy’s, a place so amiable that it literally has “Social” in its name. A sweet selection of rotating flavors — including some vegan options — are great in a cup or waffle cone but also highly recommended between two of Roxy’s cookies as one of its signature ice cream sandwiches. Fans of the Plaza location should also check out the Oak Grove store at 12220 N. MacArthur Blvd. 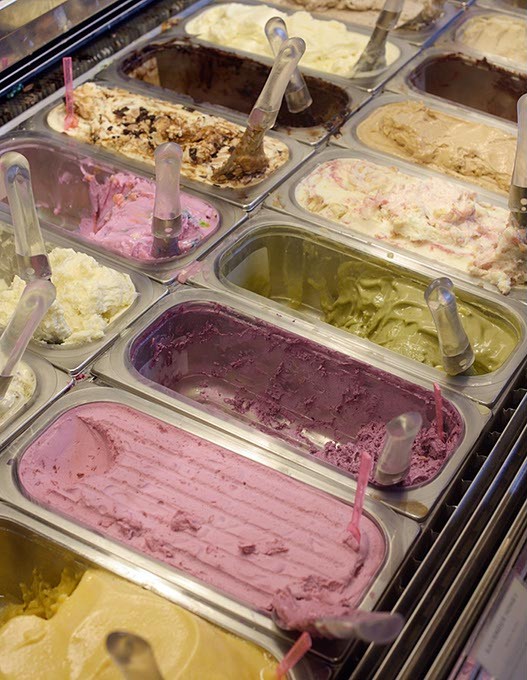 Bricktown Candy Co. is conveniently located off Reno Avenue between downtown’s biggest athletic venues for those rolling out of an Oklahoma City Dodgers day game or looking for a late-night treat outside Chesapeake Arena to celebrate a Thunder victory. The shop keeps a colorful selection of seemingly every candy imaginable, but during the Oklahoma summer, anyone’s best bet is at the ice cream counter, where Bricktown’s pedestrians can get their cold cream scooped to order.

As Al Pacino once reminded us, don’t ever take sides against the family. Anyone who could be against the fine folks at family-run Il Dolce Gelato in Norman or its elegant, silky Italian ice cream is no friend of ours. All gelato is handmade from scratch on location. Those looking for something less cold can also enjoy Il Dolce’s house-brewed Lavazza brand Italian espresso, known as one of Italy’s favorite coffees.

Rusty Rasmussen’s independently owned shop has been whipping up ice cream’s thicker cousin for Norman residents and in-the-know sweet tooths since 2001. Rusty’s boasts more than 100,000 possible combinations of vessel, cream and topping, so it is easy to keep one’s experience fresh and new at each visit. The store is known for hosting frequent special events and celebrations, which can best be tracked by following its Facebook page.

“Cup or cone?” For years, ice cream lovers have been answering the same question at big and small vendors around the world. Everyone’s favorite frozen treat is just too good to be limited to the same generic presentations. Rolling Ice Cream & Crepes is revolutionizing the standard look with ice cream made on a frozen slab surface and wound tightly like a crêpe with added toppings. Find Rolling’s Facebook page for more information.

What’s better than ice cream? Alcohol-infused ice cream, of course! Flavors like Blitzed Blueberry Cheesecake, Blacked Out Brownie Batter and Plastered Pumpkin Pie are as decadent (and boozy) as they sound. In addition to its frozen concoctions, Tipsy Treats also sells buzz-inducing macarons and champagne gummies that are available to order online. The truck can frequently be found at Delmar Gardens Food Truck Park in the Farmers Market District.