Pumpkin spice is traditionally a blend of cinnamon, nutmeg, ginger, clover and allspice, depending on the recipe. Of course, every establishment has its own take on the mixture. These seven establishments allow you to enjoy all things pumpkin spice.

By Jacob Threadgill with provided photos

You don’t have to worry about the joy of adding pumpkin spice to your drink at Stella Nova also giving you the guilt of adding sugar. The pumpkin spice syrup is one of its eight sugar-free varieties, and you can enjoy it in an array of preparations. Get it steamed as a latte (oat milk makes the best dairy-free latte), cool as a pumpkin spice frappe or as a traditional pumpkin steamer.

This national chain has swept into Oklahoma with locations in Norman and Yukon. Customers get to build their own ice cream sandwiches made with cookies, brownies or a combination of the two with their choice of ice cream and toppings. October’s cookie flavor of the month is pumpkin spice that pairs with the seasonal butter brittle ice cream special of the month.

If you can think of a baked good that can get the pumpkin spice treatment, Crimson and Whipped Cream owner Ashleigh Barnett can make it happen. It’s Barnett’s favorite season, and she puts an emphasis on fall treats. Crimson offers everything including pumpkin snickerdoodles, pumpkin bread and pumpkin whoopie pie. Be on the lookout for other treats like applesauce cake, apple cider doughnuts and a pumpkin latte blondie. 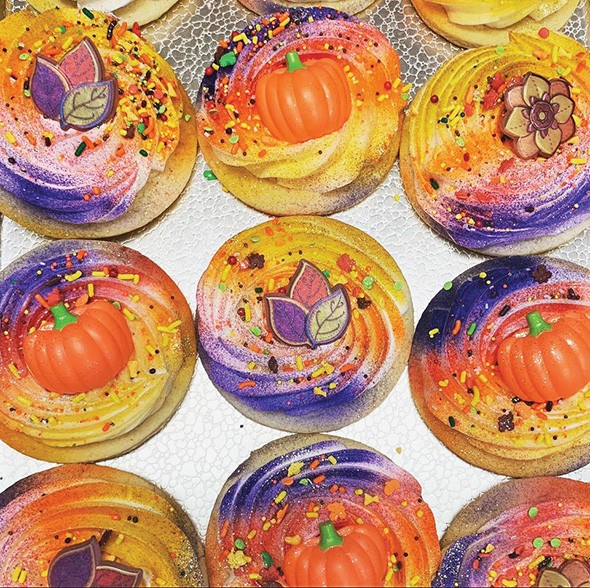 This longtime southside bakery is a go-to for all of your elaborate cake needs, but it also produces a daily amount of baked goods at its storefront. With the turning of the season, it’s the best to get holiday-designed cookies and cupcakes, such as pumpkin-flavored bars, muffins and brownies.

With two locations, one also in Yukon, Buttersweet is the go-to for fall-themed cupcakes. In Yukon, it offers the sweet and savory option of pumpkin maple bacon with a pumpkin maple cake base, maple brown sugar frosting and a strip of bacon. In Edmond, it offers pumpkin snickerdoodle-flavored cupcakes that include a piece of cookie as garnish.

This 24-hour, 7-day-per-week national franchise has swept into Oklahoma with a lot of fanfare for its inventive toppings for yeast and cake donuts. You can stop in this month and get a bevy of pumpkin options, including pumpkin streusel, caramel pumpkin s’mores and pumpkin cheesecake. It also offers a spooky-themed DIY doughnut to-go kit perfect  for parties and creating your own holiday treats.

Green Goodies celebrates its 10-year anniversary this year, and part of the reason the bakery has staying power is that it offers gluten-free and vegan options for its sweet treats. Through November, Green Goodies offers pumpkin spice cupcakes that can be ordered traditional, gluten-free or vegan. It also has an excellent pumpkin spiced coffee drink of your choice.