The first concept from Good Egg Dining Group, Cheever’s Cafe has been one of Oklahoma City’s most decorated restaurants since 2001. Known for the exceptional contemporary comfort food and its chicken fried steak, another crowd favorite has always been the chicken and waffles from the brunch menu. The fried chicken matched with the cornmeal waffles gives great grace to the brunch palette or try the roasted chicken and pepper jack strudel with its signature curry oil if you head in later or want to skip the breading.

A reputation of a century-plus another quarter of one is reason enough to hit the road to Eischen’s Bar, about a half-hour drive from the city’s core. Legendary for its perfectly tender whole fried chicken served with white bread slices, onions and two varieties of pickles, the only way to  fully experience Eishen’s is to also get the chili cheese nachos and a side of fried okra (since you came all this way anyway). With a simple menu all done to perfection, it’s no secret why Eischen’s has never been an Oklahoma secret. 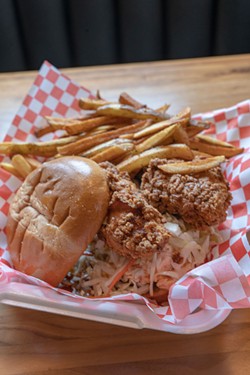 Chef Ray’s Street Eats food truck has been around the block many times in the OKC metro and its brick-and-mortar location inside the beautiful Parlor food collective takes it up a notch. An expanded menu of chicken finger creations inspired by a variety of different cuisines is the centerpiece, with flavors ranging from Nashville hot to Korean red chili glaze. The Deep South Sandwich (pictured) had a sweet twist to the fried chicken that was a top of the crisp slaw and abundant (and we mean abundant) pimento cheese. 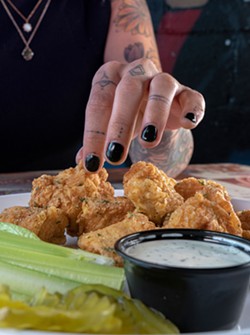 Known for their wild burgers and rich shakes, S&B’s pickled fried chicken appetizer should not be missed. The chicken is brined in pickle juice and fried, then lightly dusted with ranch seasoning. For those who need more ranch or pickles, it’s served with a side of it pickled. The soft hint of dill comes out through the chicken bites, highlighting the flavor and adding a satisfying crunch with each bite, but it’s subtle, so don’t shy away if you’re not much of a pickle person.

Taj’s chicken tikka masala, with its tender, boneless chicken drenched in a rich and creamy tomato base, tastes exactly like it did twenty years ago and that’s no complaint. If you want to keep it boneless, their chicken biryani, with its hint of mint, always hits the mark and their tandoori chicken, marinated in yogurt and spices then grilled in the eponymous tandoor (clay oven), will satisfy bone-in fans. Their chicken dishes are just a few of the reasons why Taj is a celebrated OKC mainstay. 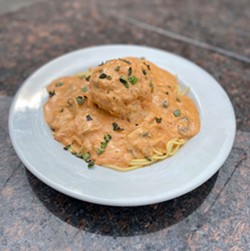 If you haven’t been to Moni’s in a few years, John and Rachel Foster have drastically expanded both their skills and the restaurant itself. The chicken rollatini, which is spaghetti served over a chicken breast stuffed with cheese and basil in a creamy pink mushroom sauce, is definitely among the best Italian dishes being served in the OKC metro, but the chicken piccata, with its lemon caper sauce, isn’t one to miss either.

If you’ve been to Chow’s, you know about Chow’s. If you haven’t been, it’s time for you to learn. Chicken is an easy introduction and sweet and sour chicken is the first entree on both the lunch and dinner specials. But where Chow’s really excels is at its authentic Asian dishes rather than Americanized “Chinese fare. That being said, you should definitely give their steamed chicken with ginger scallions or black bean sauce a go.