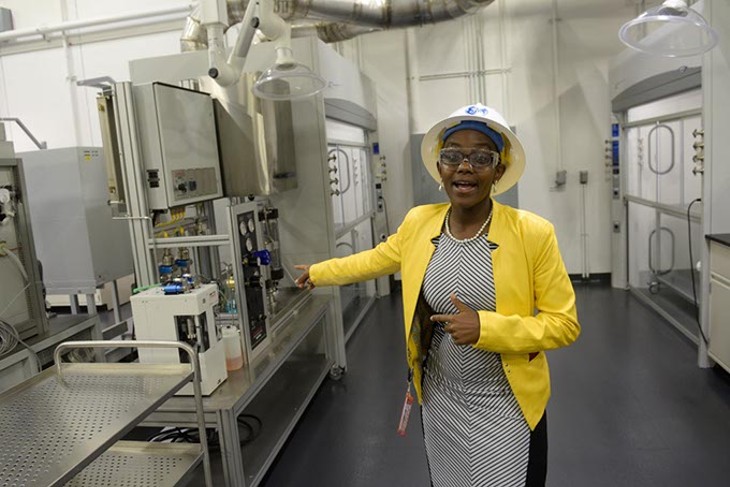 “Logic will get you from A to B. Imagination will take you everywhere.” Albert Einstein’s words are displayed inside newly opened GE Global Research Oil and Gas Technology Center, a $125 million facility that opened last week in Oklahoma City.

The modern, 95,000-square-foot research and development center overlooks downtown Oklahoma City and the skyscrapers home to well-known oil and natural gas companies. The building is decorated with the words of some of history’s greatest inventors as well as the multibusiness company’s technology past and future efforts in the industry.

The beautifications match the promises of GE leaders and the more than 100 research scientists, engineers and technicians working at the company’s 10th research facility and the first designated for the oil industry. The center will become the home of breakthroughs, company leaders said, as staffs work to solve some of the industry’s largest challenges. It was the message touted by Lorenzo Simonelli, GE Oil & Gas president and CEO, during an Oct. 5 opening ceremony.

Imagination already has found a home inside the Oklahoma City research center. Not long after GE’s 2013 announcement to come to Oklahoma City, the company started construction on a facility and built a team, which has worked out of rented space in City Place downtown. Staff began to transition into the new facility, located at NE 10th Street and Walnut Avenue, in July.

Two of those staffers are research engineers Dustin Sharber and Ashraf El-Messidi. The two are part of a team developing a helicopter drone to test for methane leaks around oil wells. Called Raven, the technology could save oil and natural gas companies money and time in detecting leaks, which are environmental and public health concerns. If the model progresses past Alpha, it would replace workers walking around wells with infrared cameras to detect for leaks. Raven’s ability to fly over the field and collect and send data to an iPad-like device can inform an operator of leaks and their severity.

“We took it from a concept on a piece of paper in June 2015 to improving the concept and (conducting) field demonstrations just a couple of months ago,” explained El-Messidi from the third-floor ideation room. “We made tremendous progress.”

The work on Raven is one example of the GE researchers’ innovations.

Groups like the Brookings Institute and the Urban Land Institute have pushed innovation districts as a key for building successful and modern cities. Innovation districts are popping up in places like Boston; Chattanooga, Tennessee; and Delray Beach, Florida. Typically, leaders develop the districts in areas already home to research institutions, tech startups, health or science firms or places with an emphasis on higher education. In addition to researchers, scientists and tech workers, the areas also draw young entrepreneurs. The idea is that people want to generate ideas, share those ideas and innovate. The close proximity to other startups, business incubators and established firms facilitates the connection of people, ideas and commercialization.

A 2014 paper by the Brookings Institute, which spurred interest by policymakers, leaders and urban planners across the county, introduced the innovation district concept as, “a radical departure from traditional economic development.”

The districts are believed to spur technology developments, create a community of inclusiveness and build sustainable economic development, according to Katz and Wagner. The two said innovation districts must expand beyond employment options and offer buildings with a mix of uses: housing, office and retail. Strong public transit and walkability play crucial roles in the success of innovation districts.

Last fall, the Brookings Institute and Project for Public Spaces began an 18-month study of Oklahoma City’s Innovation District. The results of the study, which will examine the district’s economic strengths and quality of life offerings, are believed to provide the momentum for moving the district forward. The study is backed by the Anne T. and Robert M. Bass Initiative for Innovation and Placemaking and has garnered support from a number of local organizations, including the Greater Oklahoma City Chamber.

In September, 2015, Roy Williams, chamber president and CEO, shared with the Oklahoma City Council that the study would be “extremely important” and further shape the district’s development by establishing plans for integrating housing, recreation and transit.

“We are trying to create more places where people can live, work, play and learn in one location,” Williams said at the time.

The new facility includes a high bay lab area, which is home to test wells and flow loop technology. When the lab goes live this month, up to 70 scientists can work at the same time. Some might be developing new technologies to enhance oil recovery or test a new style of jet pump.

Paulina Mwangi, lead lab engineer, said she is developing a way to better capture carbon dioxide for increasing production in oil and natural gas wells. Currently, techniques used on well sites might only capture 30 to 40 percent, she said.

“For all those years we’ve been producing oil, we still have the largest fraction left in the reservoir,” she said. “It is for good reason. The process we have created still lacks in efficiencies.”

Oil and gas production challenges fuel the work at GE. Many leaders believe its ideas, imaginations and innovation taking place at the research facility and the neighboring companies, firms and tech startups help solidify Oklahoma City momentum toward a successful innovation district and stronger downtown.