Geeks of all persuasion prepare to unit at Super!BitCon 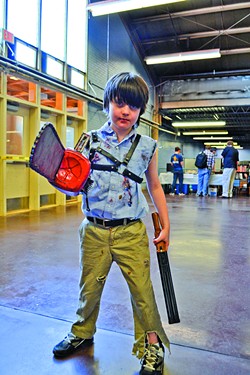 BC Phillips grew up in a middle-class family on hand-me-down game consoles. His gaming patron was an older cousin who, with every new Madden game and every new console, would pass down the recently outdated ones.

Eventually, Phillips moved up to a PlayStation. Then he got bit by the retro game-collecting bug. One wife, one Craigslist ad and six years later, Phillips brought the biggest names in Oklahoma tabletop, modern gaming and retro collecting to Oklahoma City for SUPER! BitCon.

Following its inaugural event last year, which attracted hundreds of attendees, Phillips plans for an even larger turnout this year. Held in a 40,000-square-foot space in the Oklahoma Expo Hall at the state fairgrounds, BitCon features gaming and pop-culture personalities such as Smooth McGroove, an arcade and pinball floor, tabletop gaming such as Catan, 23 artists and 118 vendors.

The idea came about when Phillips moved back to Oklahoma from Arkansas. He and his wife had agreed that their social circles should include more than just work friends. They reached out to the gaming community, started a retro gaming group and sent out a Craigslist ad about getting people together. People responded. They started meeting at Dave & Buster’s, and it took off.

Phillips was surprised by the quick success.

“One thing led to another after putting out [the ad], and here we are with a big collecting group and convention and all the stuff we never asked for,” he said.

Over time, he came to know some of the other acts in town. There was Oklahoma Game Developers, Tulsa Game Masters, Nathan Perry and The Hammerfist Clan. They were at the ready when Phillips’ call came.

“I’m fortunate to be surrounded by a circle of friends with the same interests that are willing to volunteer their time to do a giant convention downtown,” Phillips said. “I’m really proud of the gaming community in Oklahoma for not only being so well networked but for working together so well.”

This year’s event includes a series of guest panels and presentations by collectors and developers The Game Chasers, AlphaOmegaSin and Matt Harmon of Bonozo Games and celebrities Patrick Scott Patterson, ProJared and Smooth McGroove.

The expo also includes a free cosplay contest on Saturday with categories for youth under age 13, adult amateur and adult advanced, with staff deciding costumers’ placements. Prizes will be given out for the top three costumes.

Oklahoma Tabletop Gamers Society will provide an expanded tabletop and card gaming area. Staff on hand will be available for tutorials for new players.

Print headline: Feeling SUPER!, A gaming convention for every kind of geek comes to the Oklahoma State Fair grounds.