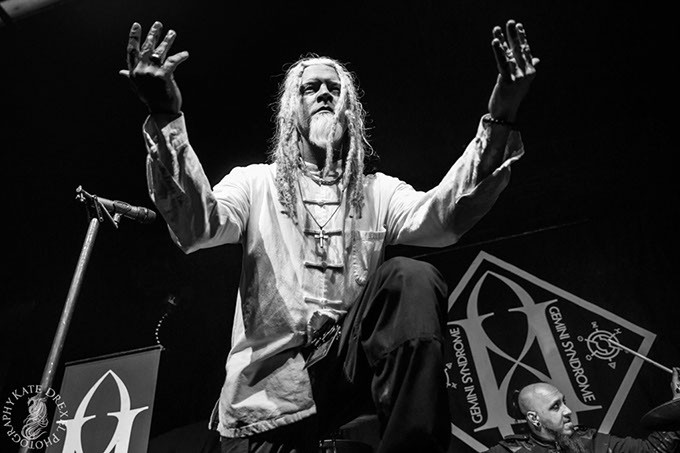 Gemini Syndrome is a relatively new band compared to the alternative rock and metal mainstays it shares a bill with at Rock 100.5 FM’s KATTfest 2017.

Main headliner Korn is as close to a household name as nu metal bands come. Vocalist Jonathan Davis has been leading the California five-piece since its inception in 1993. Chevelle has been active for nearly as long, taking shape in 1995. Swedish death metal outfit Avatar began in 2001.

Gemini Syndrome might have just two official studio albums under its belt, but the former Warner Brothers Records signees won’t be starstruck on the Zoo Amp stage. The band is already close with the Korn camp and has toured with guitarist James “Munky” Shaffer’s side band Fear and the Nervous System in the past. It has also toured with Avatar several times and played multiple fests with Chevelle.

Vocalist Aaron Nordstrom, in a recent interview with Oklahoma Gazette, said KATTfest will feel like a mini family reunion. Gemini Syndrome might not be the new kid on the block anymore, but Nordstrom said each large fest the band gets on is a time to reflect and appreciate how far its come with the help of its dedicated fanbase.

“We’re kind of getting to that point where I guess we’ve arrived or something,” Nordstrom said. “We’re certainly still climbing the ladder, but it’s exciting. It’s truly a blessing to be on stage with people of that caliber.”

The band’s current lineup includes Brian Steele Medina on drums, Alessandro Paveri on bass and guitarists Tommy Gibbons and Max Georgiev. This is a freshly reformed roster, as the guitarists were both added to Gemini Syndrome within the last few months.

Nordstrom said several iterations of the band have come and gone in the last several years, but the core with him, Medina and Paveri remains constant.

“Sometimes people just aren’t the right match,” he said. “It’s like dating, in a sense.”

Nordstrom holds no ill will toward anyone who has passed through the band in the past. Maintaining a roster of five or more performers can be as or more challenging than preserving a literal marriage.

“You’re living in close quarters all the time, and everybody has to have their own creative influence and everyone comes in with their own personality,” he said. “That’s the difficult thing to meld together. At this point, I think this lineup is a powerhouse. We all get along really well.”

Gemini Syndrome released its most recent album Momento Mori in August 2016 on Another Century Records. It was the second chapter in a planned trilogy of albums dealing with the complete cycle of life.

The band’s first official studio album was the 2013 Warner release Lux, which was thematically about birth and new beginnings. Momento Mori dealt with life and mortality. Its lead single “Remember We Die” at first is depressing but becomes weirdly comforting as its live-for-today message takes root.

Nordstrom said the next album will be a conclusion to that trilogy and will deal with themes of death and transformation. The band is scheduled to begin studio work sometime in January.

While Nordstrom has a rough idea of what the album will be about, he has not started earnestly writing for the project yet and is as eager as any fan to find out how that process will unfold.

“It’s going to be an interesting record to write,” he said, “because obviously I’m not dead yet. How can you write about something you haven’t experienced? I’m not sure.”

Gemini Syndrome built its way from the ground through mostly grassroots means. It began as a regional touring band shopping around a self-recorded EP/demo. It expanded its touring radius and built up enough followers to the point it eventually got noticed by Warner Brothers. The band played out the course of its one album deal and spent a short time as an independent before joining Another Century.

“We’ve definitely put in the work,” Nordstrom said, “but there’s an element of timing and luck — being in the right place at the right time.”

Gemini Syndrome calls its devoted following “synners,” an appropriate term for the group often self-identified as troubled or outcasts. The band’s introspective and sometimes philosophically spiritual lyrics connect with fans in ways other metal outfits don’t.

Nordstrom said in a time when some believe a following is grown through social media and marketing, Gemini Syndrome’s live show is its most powerful conversion tool.

“It’s not only the show itself,” he said, “but actually being out there and talking to fans and making connections with people has been one of the most important parts of our journey.”

Nordstrom said he began writing songs at around the age of 12 as a personal form of release and to escape from personal darkness.

“Life is tough,” he said. “Life is full of hardships, and I know for me growing up, it was the bands that had something to say that helped me through dark times. I got the opportunity, through this band, to do the same thing that helped me.”

Nordstrom has the appearance of a celestial being. He has a long beard and dreadlocks and, thanks to a form of albinism, snow white skin and hair. But battles with depression and personal demons show he is as mortal as his “synner” fans.

In a world full of destructive coping mechanisms, Nordstrom has found that music is not only self-preserving, but productive for others. Through his songs, the vocalist and primary band lyricist is able to scale his own life hurdles while simultaneously helping his fans clear their own.

Nordstrom said he is constantly receiving emails and other messages from people saying how Gemini Syndrome has changed their lives for the better. For him, there is no more rewarding feeling.

“That’s mission accomplished, as far as I’m concerned,” he said.