Mammoth Processing takes a delicate approach to the process of cannabis extraction in order to produce what it calls “extra virgin cannabis oil.” 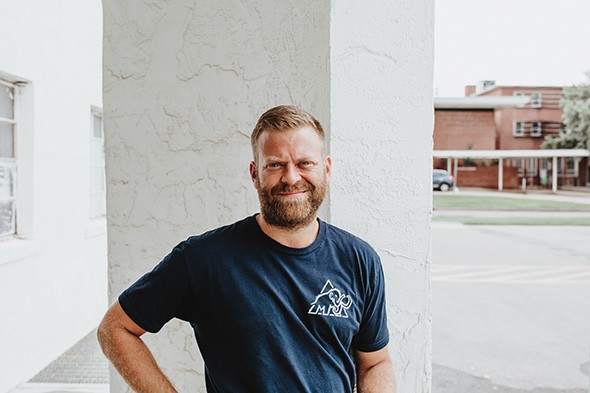 “Ninety percent of the time, we smoke flower, and 10 percent of the time, for ease and discretion, I smoke a cart. Mammoth is for flower lovers,” co-owner Derek Kern said. “If you don’t like flower, if you’re one of the kind of people that you’ve gotten into cannabis because it helps you with this or that but smoking flower is not your deal, I don’t suggest a Mammoth cart. I do suggest a Mammoth syringe, but I don’t suggest a Mammoth cartridge. Our Mammoth syringe — we call it the Swiss Army Knife of cannabis oils — because with that syringe, you can dab, you can lace joints or blunts. It’s fully activated, so you’re looking at 1,000 milligrams of oil to make whatever edibles you want. It’s really just kind of the end all, be all.”

Kern said Mammoth’s style is more Pacific Northwest than it is Colorado.

“Everyone likes to say the buzzwords like ‘full-spectrum’ even though they absolutely aren’t. I see distillate companies nonstop saying that they’re full-spectrum. I have a botany degree from Oklahoma State University. I’ve been on the plant genetics side, the molecular genetics side of plants for a few years in the lab, and so many of these people within this industry just don’t know what these words are. They just use them as selling points,” he said. “It’s kind of sad because it really almost snake-oils the whole deal. But I see people use the word ‘full-spectrum’ all the time, so we’re trying to get away from that word and we’ve kind of trademarked our own — ‘EVCO2’ — which is ‘extra virgin cannabis oil.’ To be considered extra virgin olive oil, you have to fit in certain criteria, the criteria being that it’s low heat and low pressure. That’s how the olive oil is processed, and that is exactly the equation that we use for cannabis. We just go at it very low, very slow, and that’s kind of what separates us from a lot of other CO2 processors. With CO2, you can still go really high temps and really high pressure, and so a lot of people just essentially with, like butane, you’re just blasting it. And I like to gently massage it. 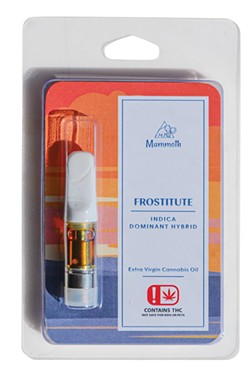 “The only true way that you can get a full-spectrum concentrate from the plant is by basically taking it out almost kind of in that raw form and then really not doing much post-processing. Which, distillation is like the farthest post-processing you can take it. You can’t go much farther except for isolation. Nobody’s making THC isolate around here yet.”By applying low heat and low pressure, Mammoth can maintain the molecular integrity of not only the cannabinoids but terpenes and flavonoids too.

“We really try to focus on maintaining the integrity of the plants because I want you, as the end consumer, if it’s a Blue Dream cart, I want you to be able to taste that and say, ‘Oh yeah, this is very much like the Blue Dream flower that I got from the same grower,’” Kern said. “That’s why we like to put the farm’s logo on the back, so that hopefully you’ll be able to source some of that flower yourself and see just how close the vape cart is to the actual flower.”In addition to listing the flower strain and source farm on the packaging, Mammoth includes a breakdown of the percentage of cannabinoids as well as terpenes.“I don’t like to bad-mouth the other side of the industry, but the science is coming out that unfortunately doesn’t look good for their end of things. We’ve found that these people who go back and get what they call cannabis-derived terpenes, that a lot of times, once those are actually tested, they’re hydrosols at that point because of the way they were extracted, and hydrosols are not good for you. They’re definitely not good for you to smoke,” Kern said. “I believe in cannabis wholeheartedly across the board for many things, and not just high-THC cannabis. Anytime I can get my hands on some Harlequin or a one-to-one flower, you better believe I’m going to grab some of that. I think that science is showing us, too, that what THC does is use those other cannabinoids as carrier molecules so that your high last longer just like flower does.”

"But I see people use the word
‘full-spectrum’ all the time,
so we're trying to get away
from that word and we've
kind of trademarked
our own — ‘EVCO2’ —which is
‘extra virgin cannabis oil.’"
—Derek Kern tweet this

In addition to slowly crafting what will be a consistent slate of strains, Mammoth also does small-batch limited run cartridges. It made one — Blue Widow — for 4/20 with Brothers Griiin, the drummers for The Flaming Lips.

“Five dollars from every cart ended up going to a charity there in Paseo,” he said. “It sent, for sure, three kids to camp this summer, but I think maybe four kids got to camp this summer on that deal. So, yeah, hoping to do more stuff like that in the future.”

The cartridge also came with a curated playlist from Brothers Griiin.

“We have had our hands in music in Oklahoma City for years, and so we hope to do more on the Mammoth and music side by hosting shows, hosting events and also doing more and more of those kind of curated playlists so that when you buy a cartridge, you get a little something extra,” Kern said.

Another special cart released earlier in the year for Pride was the Sungrown Rainbow Blend.

“That really worked out perfect in that we try to stay what’s considered strain-specific so that each one of our carts, we source single flower. … We had gotten lucky in that we had sourced a bunch of flower and did a bunch of runs that left us just enough left over to kind of do this blend and the color scheme and everything because it was like Strawberry Cough, Blue Dream, Lemon Haze, so it had like all the ROYGBIV kind thing and we knew that Pride was coming up,” Kern said. “I have a brother who is gay, so we just were like, ‘Oh, yeah! We know exactly what we’re going to do.’”

Mammoth are already stocked in many dispensaries across the metro, but if you see one, know that it has chosen that spot intentionally.

“We both have other jobs right now that kind of get to still pay the bills, and so we don’t have to just go into every dispensary,” Kern said. “If we see things in the dispensary we don’t like — there’s been several and several that have big names — we just walk out because I just don’t want to be part of that.”