CityRep’s production of Every Brilliant Thing uses audience participation to explore the joy in difficult circumstances. 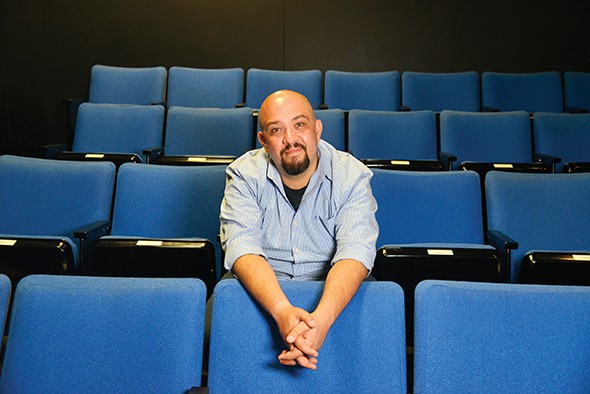 The director and lead actor have already been chosen, but the rest of the cast for Oklahoma City Repertory Theatre’s (CityRep) latest production will be selected from whoever happens to show up.

Every Brilliant Thing runs Sept. 6-22 at CitySpace Theatre in Civic Center Music Hall, 201 N. Walker Ave. The play, created by writer Duncan Macmillan with comedian and performer Johnny Donahoe, enlists audience members as supporting cast in what would otherwise be a one-person show.

“It breaks all of the normal conventions about theater,” said director Linda Kay Leonard. “There’s not a fourth wall.”

Jon Haque, who stars as the play’s unnamed narrator, said his goal is to “touch base” with every audience member before the play begins.

“I’m kind of meeting my fellow participants in the experience, and I’m casting them in my brain,” Haque said. “Normal improv is like, ‘Well, let’s just see what happens.’ I kind of know what’s going to happen, but these people aren’t professional improv-ers. These people don’t know what the ‘Yes and’ is, but the idea is that if they know that it’s OK to be genuine, because I’m going to be as truthful as possible in how I’m expressing these moments, that they can be truthful with me if I call upon them in the show. And whatever their response is, that’s OK.”

Following the advice of therapists, Haque will also be determining who might be willing and able to participate in the play, which details the narrator’s attempt to catalog a list of life’s enjoyable aspects to convince his depressed mother to go on living after a suicide attempt.

“How do you talk to an audience member and ask them to be part of this kind of show experience without causing shame or embarrassment or just putting them in a mind space that might bring up some past traumas?” Haque said. “With standup comedy or with improv, there’s a little fun in poking fun at each other, and you can take that moment to have that kind of fun, but in this show, it’s more about that shared experience. … It’s never met with a negative joke or a joke that even slightly pokes fun at that audience member. Hopefully towards the end of the show, everyone has permission not only to laugh, but they feel comfortable enough to cry, they feel comfortable enough to maybe go into a place that they have not really considered in a long time. Maybe that’s the moment that they reach out for help. That’s my hope, anyway.”

The script’s stage directions call for the narrator to pass out scraps of paper with numbered list entries to audience members, who are instructed to shout the entry (“ice cream,” “roller coasters,” “people falling over,” etc.) when their number is called.

The role is an uncommonly vulnerable one for Haque, who said he is “usually cast as the big, loud, funny, pratfall dude,” and preparing for it required him to consider his own emotional wellbeing to ensure he would be able to “go on this journey and not fall.”

“I’ve done heavy projects before, but you always get to hide behind a mask. This show almost encourages you to leave that behind,” Haque said. “If the audience doesn’t think I am being as genuine as possible, then they’re not going to be with me. If they think that I’m playing up a moment for a dramatic tug, then that doesn’t work.”

The play incorporates elements from improvisational theater, Haque said, but the goal is not to get laughs, but to create a genuine human moment.

“Sometimes I play a small child,” Haque said. “Sometimes I play a person who is avoiding himself. Sometimes I play a person who’s completely accepting of himself, and so I have to be able to get into those mindsets and then genuinely react to whatever those audience questions are. So it’s improv that way. It’s not for the punch line. It’s for the truth. … We call it emotional gymnastics because the show does turn quick, on some pretty steep corners. It’s joy one second, absolute devastation three words later. …This might be a fun moment, or it could be a pretty hard moment for everybody that’s here, but it’s going to be OK. We’re going to get through it.”

Leonard said she thinks Haque’s skillset is uniquely suited for the play.

“It really takes an actor who can handle not only the scripted work and make it genuine and empathetic and humorous,” Leonard said, “but also it takes an actor who has that improv skill to be able to take people on that journey, realistically, and then come back when they need to come back.”

Staging the play in CitySpace, which has seating on three sides of the stage, required Leonard to create multiple scenarios for blocking — “A, B, C and none of the above” — depending on where the audience members Haque chooses to participate are seated.

“For Jon, I think the biggest challenge is going to be having that new experience within this crafted play every night, because we don’t know what people are going to say next,” Leonard said. “Even though he helps them and gives them some words to say, they don’t sit with the script in their hand, so the opportunity for that to go south or go awry or go in a whole different direction than you would think, that’s going to be a challenge — going in with the audience so they stay with him, so they want to come up on stage, they want to be involved or be part of the story and at the same time guiding them all back to what the journey of the piece is about.”

Haque described the experience as “theatrical catharsis” but added that traditional theater is also a form of “group therapy.”

“We’ll see that in just regular shows, where if it’s a comedy, the first person who laughs … they kind of are alone,” Haque said, “but they give permission for the rest of the audience to go ahead and laugh. And that’s OK. By the end of the show, everyone is screaming and howling and crying, and they’ve had such a great time.”

CityRep’s founding artistic director Donald Jordan said the play is an example of the singular magic of live theater.

“We go to the movie theater for $1 and watch the Avengers blow up the universe and all that kind of thing, but this is the sort of inherently theatrical live experience that you can’t get any other way,” Jordan said. “It’s the high-human-touch balance to our increasingly high-tech lives.”

Though Every Brilliant Thing deals with depression, loss and suicide, Haque emphasized that the play is meant to be uplifting.

“I hope people aren’t afraid of this show because it sounds like it’s a pretty steep climb,” Haque said. “It is about mental wellness. It is about depression, but it’s also about joy. It’s also about finding the humor in really dark areas. I just want to make sure that everybody understands that this is going to be an enjoyable experience. It’s not something to be afraid of. It’s not a deep, dark climb into a depressive area. … The show is not that. The point of the show is about finding joy, about being able to laugh.”