There’s a story George Bogart’s former students like to tell about their late mentor sneaking tubes of bright acrylic paint into their studios. Bogart was a masterful colorist who worked big, and it was one of the many ways he pushed his pupils to take risks and remap their aesthetic boundaries. “If you’re working on an MFA and your professor comes by and leaves a bunch of paint sitting next to work that you think is already pretty terrific,” said JRB Art at the Elms gallery owner Joy Reed Belt, “you start to think, Should I add those? Should they be part of my next piece?” In tribute to Bogart’s dual role as artist and mentor, JRB Art at the Elms presents Legacy: George Bogart and Students, a selection of Bogart’s work alongside those he inspired. The new exhibit runs through May 1 at the Paseo Arts District gallery. Bogart’s work on the canvas and in the classroom left a mark on visual culture in Oklahoma and beyond. The Duluth, Minnesota, native launched his distinguished career in the 1960s, holding teaching positions at the University of Texas at Austin and Pennsylvania State University before landing at the University of Oklahoma in 1970. Aside from a yearlong residency at University of California, Berkeley, Bogart spent the last 35 years of his life in Frontier Country. He worked and lived in Norman until his retirement in the late ’90s, occasionally returning to OU as professor emeritus until his death in 2005. Bogart’s widow asked Belt to work with her late husband’s estate. The spirited gallery owner and collector wanted to put together an exhibit featuring his paintings but soon considered including his students’ works as well. “I didn’t know George Bogart personally, but some of the artists I’m so interested in were his students,” Belt said. “When I first started having shows with artists like Michele Mikesell, David Crismon and George Oswalt, it was clear that their work was so uniquely different from anybody else’s. Legacy is a way of exploring that.” 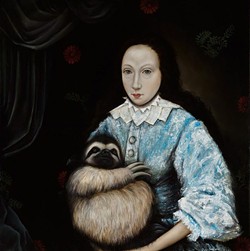 Those who knew the beloved professor and painter remember his unique ability to challenge and inspire his students as vividly as the finesse of his playful, abstract works. “Sometimes he played devil’s advocate, other times he encouraged,” featured artist Sunni Mercer wrote in a statement posted to Bogart’s website. “He challenged and he had relentless expectations, but no matter what teaching posture he took; he always stood alongside. … I consider myself so fortunate to be able to say, ‘George Bogart taught me to paint,’ but even more honored to say he was my friend.” Former students Joe Andoe, Linda Lou Warren, Larry Hefner and others also are featured in Legacy.

“He was a role model for those he taught. They could see how dedicated and disciplined he was, and it was contagious,” Belt said. “There were things some of them modeled after Bogart because he was so encouraging and loved his craft so much. I thought it just made a lot of sense to put them all together and see what connections there were to be made.”

While Bogart’s work emphasizes abstraction, many of his former students’ subjects featured in Legacy — like the sleek, psychedelic horse leering with alarm in Jennifer Cocoma Hustis’ “Fight or Flight” — are more figurative and earthbound. Other works, like BJ White’s seasons-inspired quartet of acrylic paintings, make just enough visual reference to the natural world for it to be recognizable. As Belt moved through the exhibit, she remarked that some of Bogart’s students, including now-retired public school art instructors Oswalt and Caroline Farris, went on to become teachers themselves. She doesn’t think it is coincidence. “It’s like people who say, ‘I’m a doctor because of my family physician; because somebody saved my grandmother’s life,’” Belt said. “I think art is that way. I think Bogart showed his students that this was a profession with honor and meaning.” Belt stopped for a beat to turn over a thought that seemed complicated, but it came out clean, vivid and compact, like the surrounding work on the walls of her gallery. “It’s a powerful thing,” she said. 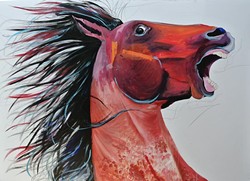