The Comedy Get Down World Tour brings some of comedy’s biggest names back to Oklahoma City. 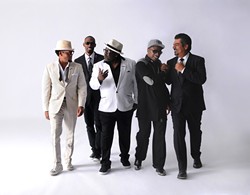 When The Original Kings of Comedy debuted in 2000, it set off a ripple effect, bringing standup back into the mainstream and creating what Cedric the Entertainer calls “event status” for comedians.

The group came together for a benefit show in January. Lopez contacted a number of comedians to raise the funds necessary to erect a statue of Richard Pryor in Peoria, Illinois, his hometown. They raised more than enough money to build the monument. Perhaps more importantly, they had a great time together.

“We just said, ‘This is fun.’ We had a blast hanging out, so it seemed like the natural thing to progress into a tour,” Cedric said in a recent interview with Oklahoma Gazette.

One thing The Original Kings of Comedy did was transform live comedy into a special event.

“Before, you might get one big name,” Cedric said. “Now, you’re getting a multitude of your favorites showing up at once. And on arena tours, with the huge Jumbotrons hanging above the stage, there’s really not a bad seat in the house.”

The show, also called The Black and Brown Comedy Get Down, has crisscrossed the country before heading into Oklahoma City. Next up is an international tour stopping in South Africa, Europe and possibly Australia.

Bringing standup into an arena setting isn’t always easy. Most comics work in front of more intimate crowds, so it takes hard work to get massive crowds laughing, Cedric said.

“It’s one of the hardest jobs out there to walk up to a microphone, just be yourself,” he said. “You’ve got to rein in that horse and grab hold of the audience. It can be tough to get 8, 10, 12,000 people on one accord, getting them laughing in unison. It can be a bit daunting.”

Luckily, he said, The Comedy Get Down is stacked with seasoned veterans.

“We all love being out there, watching each other perform,” Cedric said.

And when current events lead them to craft jokes on similar subjects, it’s fun to see whose joke comes out on top.

“When something big hits, like the Donald Trump news cycle the last couple weeks, everybody maybe has a point of view,” he said. “If too many people are doing the same joke, you fall back. You kind of quietly let the person who has the best joke have the joke.”

On any given night, though, it’s anybody’s show. Cedric said all the comics on the tour are “craftsmen of jokes.” Each finds a different way to keep audiences engaged and laughing until the lights come up.

Cedric also recently wrapped up the fourth season of his TV Land show The Soul Man and the film Barbershop 3.

He recently launched a new show on The CW called Cedric’s Barber Battle.

Print headline: Get down, The Comedy Get Down World Tour brings some of comedy’s biggest names back to Oklahoma City.

The Comedy Get Down World Tour