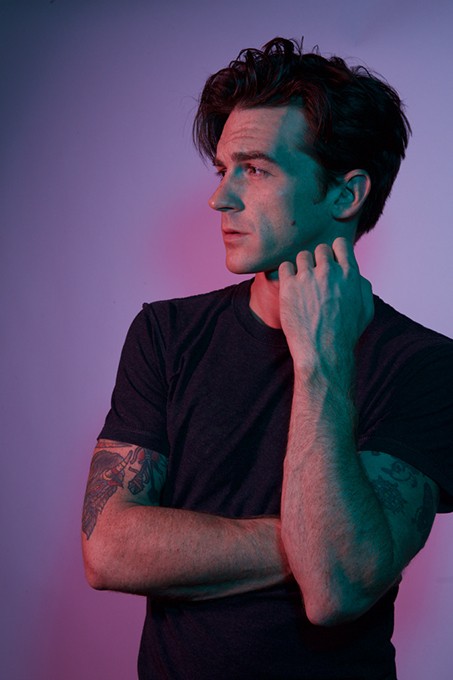 Though known by many as one of two titular co-stars in the popular mid-2000s Nickelodeon comedy Drake & Josh, Drake Bell’s music career is lengthy and includes much more depth than one might assume from a former child star.

His pop-rock song “Found a Way” was an excellent theme for the television series created by former Nick hit maker Dan Schneider (All That, The Amanda Show, iCarly, Victorious), who was removed from the network in March amid reports of anger issues and uproar over past Twitter pictures he posted of young actresses’ feet.

Bell’s music has frequently paid tribute to past eras that predate his young fanbase, giving heavy nods to The Beatles on his 2006 album It’s Only Time and covering rock ’n’ roll greats on his 2014 LP Ready Steady Go!, executive produced by guitar legend Brian Setzer and featuring a cover of Setzer’s Stray Cats ballad “I Won’t Stand in Your Way.” His most recent work, the June 2017 EP Honest, takes a sharp turn from tender homages to the past in favor of radio-ready, trap-influenced pop.

There was talk of a bitter split between Bell and former co-star Josh Peck after the latter failed to invite the songwriter and guitarist to his summer 2017 wedding to girlfriend Paige O’Brien. But both have publically patched their differences since, and in a recent Oklahoma Gazette phone interview, Bell was highly complimentary of his longtime friend.

Bell also answered Gazette questions about discovering Setzer’s music for the first time, his love of SoundCloud rap and Schneider’s time at Nick.

Oklahoma Gazette: Ready Steady Go! was your tribute to rockabilly, but the new Honest EP has strong pop and electronic vibes. How did the sound on Honest come to be?

Drake Bell: Well, I made that rockabilly record basically for myself. It was my pet project. I got to work with Brian Setzer, who’s my guitar god. I played a bunch of the songs I loved growing up, and that got me into music. But it was more of a cover album. I was touring it, and it was more like touring with a cover band, kind of. It was a lot of fun — shredding on the guitar and playing all that music that I love — but as a songwriter, I was kind of feeling stifled, so when I got back to the studio, I just started writing songs and it all started coming out. When we started to work on the production, it just took on a whole new life.

OKG: Do you still talk to Brian Setzer?

Bell: Every once in awhile. You know, here and there. He’s always on the road.

OKG: What was your introduction to Setzer’s work? What’s the backstory behind that?

Bell: I’ve just loved rockabilly music ever since I was a kid. When I was a kid — I was maybe 10 or 11 — there was this ’80s hair-metal compilation thing they were showing on TV. And then the Stray Cats came on and I was like, ‘Whoa! Those guys look so cool! They look like all the guys that I love, like Elvis and Jerry Lee Lewis and all of that, but this is the ’80s.’ So I ask my dad, ‘Who are the Stray Cats?’ And he’s like, ‘Oh, you mean the rockabilly band from the ’80s?’ And I’m like, ‘What? There were rockabilly bands in the ’80s?’ So I started to get into this whole new rockabilly thing — you know, The Blasters and the Stray Cats and all that kind of thing. I was like, ‘Oh my gosh! There’s all these people.’ And then Brian Setzer came out with his big band right around that time. And I was just like, ‘Oh my God! There’s people now doing the music that I love — all this old ’50s rock ’n’ roll!’ I thought I could only find this with all the old cats, you know? The ’60s guys and Sun Records and all of that. So it opened up this whole new world for me. It gave it this punk rock edge that I just loved — tattoos and hot rods. I just always loved that growing up.

OKG: So is that the music you’re listening to when you’re chilling out at home?

OKG: Is there anything in particular that you’re playing right now?

Bell: I’m listening to a lot of Lil Pump and Lil Xan and Lil Skies. Also like Kyle and Khalid. I really love Post Malone.

OKG: A lot of people write off Lil Pump without looking into his music too much.

OKG: Recently, you were in the studio with Twenty One Pilots drummer Josh Dun, right?

OKG: Is there any kind of story behind that? Is there some new work coming up?

Bell: Yeah, he’s played on a couple of my new songs. It’s super dope. I’ve known Josh for a while, and he is a super-cool guy. He’s a really good drummer.

OKG: Is there a lot of new music you’re working on at the moment?

Bell: Yeah, I have a lot of new stuff coming out. I mean, not a ton, but I’m constantly working, working, working. I have a bunch of new songs that are about to come out; I’m just finishing them up.

OKG: What is the typical Drake Bell crowd like? Who are you seeing when you look out into the audience?

Bell: The crowd is completely eclectic. They’re all ages — it’s everybody. My crowd is just so diverse; I just look out there and see diversity. There’s not a demographic. I’ll have a girl who’s got a One Direction T-shirt and a Justin Bieber phone case and then a guy behind her with a Slipknot shirt and long hair. And they’re all ages; there will be a 10-year-old and 25-year-old and then a 32-year-old behind that. It’s really cool.

OKG: There is eclecticness in the crowd that kind of reflects your musical tastes and the music you’ve worked on.

OKG: I need to ask at least one Drake & Josh question. Because of the show and its title, you’re pretty much going to be associated with co-star Josh Peck for the rest of your life. What’s it like to have a person like that who you will forever be linked to?

Bell: Well, I’m glad it’s someone as badass as Josh Peck — someone who is that talented and witty and awesome. He’s like my real brother, you know? I’m proud to have that moniker forever.

OKG: I should also ask about Dan Schneider, who was recently let go by Nickelodeon amid allegations of misconduct with some of the network’s young acting talent and anger issues. What were your interactions with Schneider like over the years?

Bell: I’ve known him for years; he’s one of the greatest people I ever worked with.

OKG: So, would you say his removal from Nickelodeon was unjust?