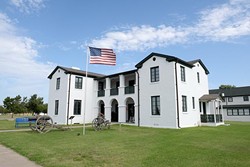 Possibly due to the deadly nature of war, military installations seem to have an abundance of paranormal activity reports, and at Fort Reno, reports involving ghost sightings or otherwise unusual events are very common.

“In our visitor center, we have furniture upstairs that moves,” said Sarah Overholser, Fort Reno director of operations. “Also, one of my volunteers told me there is ‘someone’ who likes to imitate my voice. [The volunteer] called me once and asked, ‘How did you sneak past me? I heard you upstairs.’ I told him, ‘I’m not upstairs; I’m in Texas.’”

She stayed on the phone with him as he locked the visitor center’s doors and headed upstairs to check for voice-throwing interlopers. Nobody else was in the building.

So many reports came from both Fort Reno workers and visitors that the facility started inviting paranormal experts to take families on ghost-related walkabouts on the compound, exploring buildings and areas where sightings and peculiar phenomena regularly occur. Overholser said Ghosts of Fort Reno events become more popular each year, and tours happen monthly during spring and summer and almost weekly in October. The next tour is Saturday at Fort Reno, 7107 W. Cheyenne St., in El Reno. An Oct. 29 event is sold out.

A quick look at Fort Reno’s history puts it squarely in the category of places where spirits might have a few unreconciled beefs over their mortal fate. Named for Gen. Jesse L. Reno, the U.S. Army established Fort Reno to protect the Darlington Agency during the American Indian uprisings that led to the Red River War of 1874. After the war, Fort Reno’s mission was shifted toward protecting area Cheyenne and Arapaho tribes and then policing the 1889 Land Run.

“When I talk to military people, they say that a lot of military bases are haunted, so I didn’t get a lot of flak for thinking Fort Reno is haunted,” Overholser said.

During tours, paranormal activity experts armed with electromagnetic field meters guide visitors through various structures as they explain each facility’s function and recount the spooky events known to take place. Overholser visitors could come to Fort Reno each month and not experience the same tour twice.

With the exception of the fort’s chapel, which is considered a “safe place” by the paranormal experts, nearly every quadrant of Fort Reno has a story about emanations from the shadow realm. At the U.S. Cavalry Museum behind the visitor center, second-floor workers often report hearing tubercular retching and coughing coming from the area of the front desk, but when they check on the employee, she reports she’s fine and disease-free.

Anecdotal reports of a girl named Emily Ann being murdered and buried under the Victorian home at Fort Reno have never been fully confirmed, but many visitors report seeing the child standing in one of the windows. Recently, one guest witnessed something that did not look human at all.

“One kid took a picture on our last ghost tour, and there was something weirdly lizardlike in the picture,” Overholser said. “I don’t really know how to explain that one, but that’s the only nonhuman-looking thing I’ve seen in one of the pictures.

“The paranormal team was sitting there, looking at the picture, because whenever they get a picture like that, they study it to make sure it isn’t a fake. So now I have to get a priest or something.”