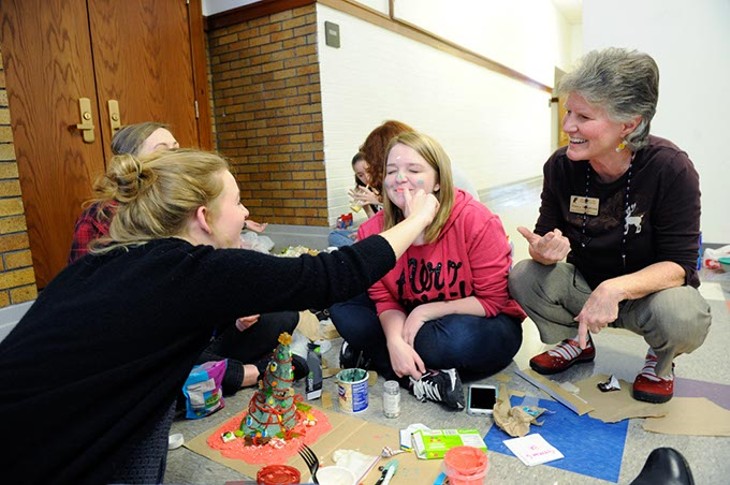 Every house starts with a sturdy foundation. For German students at Classen School of Advanced Studies, a house is the foundation.

In what has become a winter tradition for children and staff, more than 150 German-language students at the sixth- through 12th-grade public magnet school compete every December in a gingerbread house-building competition, as teacher Nancy Boudreau has done for her classes each of the past 30 years.

Though Boudreau has substituted graham crackers for gingerbread in the interests of ease and fairness, the visions some students have going into the contest are no less grand.

“This was all I did during art class yesterday,” Lea said.

The planned and deliberate actions of the oldest students contrast the sugarcoated chaos of the seventh-graders who constructed their houses just down the hall.

When finished, Lea’s droid was unable to take the weight of added frosting. Her team adapted the plan, instead making a sort of BB-8-themed box.

Over the years, Boudreau said she has seen many plans, large and small, come tumbling down.

“As it progresses, inevitably, some of them are going to fall, and then it’s going to be called The Tornado Hit, or something,” she said.

The rules of the contest, which Boudreau brought to Classen from John Marshall High School in the mid-’90s, are few and simple. First, everything on the house must be edible — edible as defined by Boudreau.

All construction must be started and completed in the student’s individual class hour. There may be no more than four students per group.

There are a number of practical reasons to have German students participate in the contest.

Gingerbread, Boudreau said, is “so German.”

The German word for gingerbread is Lebkuchen, she said. Leben is a verb meaning “to live” and kuchen means “cake.” She also mentioned the brothers Grimm and Hansel and Gretel and general German Christmas traditions.

Boudreau said in teaching the language, it is important to also build a culture from the ground up.

The contest serves an educational function and is a tool in the unassumingly competitive recruitment of students into the school’s three main language offerings: Spanish, French and German.

Boudreau said, generally speaking, German is seen as the least popular of the three choices. Spanish is most practical, and French is most chic, though some will disagree. Senior Phu Tran said he chose German because he thought it was the best option available.

“Spanish was overpopulated, and my tongue hurts when I try to speak French, so German would be the best alternative,” he said.

In her 20 years at Classen, Boudreau has successfully maintained strong enrollment through the use of what she calls “walk-aroundable advertising.”

Aside from the annual and very visible gingerbread house contest, Boudreau makes sure students in German Club or GAPP, the school’s German-exchange partnership program, are decked out in well-branded T-shirts. Students also practice singing German songs loudly and proudly for others to hear.

Those on Classen’s International Baccalaureate Diploma Program pathway, a special academic program, are required to take six years of a foreign language, from sixth to 12th grade. A student’s math, English or history teachers might change each year, but in a program as tight as the German department, Boudreau teaches many of her students four, five or even all six years.

“I got the privilege of watching everyone grow,” she said.

However, Lea and Tran are part of her last senior class. She has been semiretired for several years and fully retires at the end of this school year.

Her husband, Fred Boudreau, teaches psychology at Classen and also is semiretired. She said both look forward to the days they can travel on a whim and give grandparenthood their full attention.

But a teacher can’t go decades rebuilding lost German childhoods without growing some attachments. Boudreau said she will miss the students and the gingerbread house contests and other activities are as much for her as they are for any student.