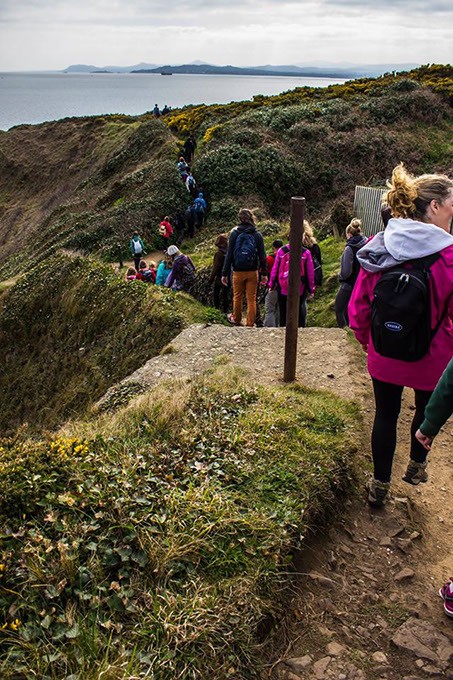 Imagine moving to a new city for work, changing career paths, working from home or being the victim of friends moving away.

Now imagine instant access to a network of over 35,000 people who meet up for things like happy hours, lunches, hiking and concerts.

GirlCrew is a social network for women age 25 and older. Local groups work within a larger network that is truly international. Cofounder Áine Mulloy explained the purpose of GirlCrew is to help each other, network professionally, have fun and “get people offline and actually engaging in real life with each other.”

Closed Facebook groups currently link people together, and Mulloy said an app is being developed.

Facebook was so impressed with the supportive community for women and the scope of participation after the women launched the first group in Dublin, Ireland, that the social media giant featured GirlCrew on its stories platform. Mulloy and the two other founders, Elva Carri and Pamela Newenham, were flown from Ireland to Facebook headquarters in California to meet co-founder Mark Zuckerberg and CEO Sheryl Sandburg.

More groups started organizing around the world. From Singapore to Canada, New York to San Francisco, women are connecting.

Mulloy recently spoke with Oklahoma Gazette about the range of activities she has seen organized. Friendships have formed — they’re each other’s bridesmaids, they move in together, they help each other get jobs.

GirlCrew boasts more than 35,000 members across almost 50 cities worldwide, including a recently formed Oklahoma group that already includes over 100 women.

“We just landed there not that long ago,” Mulloy said. “We’re excited to build up Oklahoma. We always hear great things about the city.”

Master’s students, single mothers, young professionals and people considering traveling to the state mingle within the private Facebook group and introduce themselves, ask others to go to various concerts, organize happy hours and more.

“It’s interesting to see that melting pot of women from all walks of life coming together in a safe and positive way,” Mulloy said.

The key to GirlCrew’s success is the huge numbers of participants, because its content is user-generated.

“You have access to so many people straight away,” Mulloy explained. “With GirlCrew, you have a constant community that you can dip in and out of at your leisure and have the flexibility to choose whatever event picks your fancy, or you can suggest one.”

GirlCrew was born after Carri adjusted her Tinder settings to meet female friends. She didn’t know the extent of need GirlCrew would eventually fill. She just wanted to go dancing, and no one in her social circle could go with her.

Tinder also is where Carri and Mulloy met and became good friends. From there, Mulloy said, a group of them continued to make friends via Tinder and sent them the link to the GirlCrew Facebook group.

Bumble, a dating app that claims to provide women more power by giving them the ability to initiate contact with matches, has a BFF (“best friends forever”) setting.

Mulloy pointed out that GirlCrew was around before Bumble and women tend to like its casual group focus.

“Some of our users used Bumble, but they complained that it was incredibly intense because it’s this one-on-one with a stranger,” she said.