Giving Up the Ghost a welcome addition to Dylan Stewart's catalogue 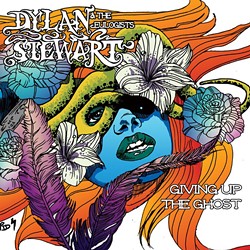 Raspy-voiced Dylan Stewart found a new band to paint the sonic landscape for his eerie but often touching stories, and to an overall great effect. The project also features strong contributions from Samantha Crain, Camille Harp and Travis Linville.

Giving Up the Ghost, released Feb. 5, is Stewart’s third album and his first with his new band, The Eulogists. It marks his first release since 2012’s Dylan Stewart and The Johnny Strangers.

The Eulogists is an appropriate name for the group, considering Stewart’s penchant for a lyrical style that dabbles in Southern Gothic aesthetic. The immediately noticeable strength in Ghost lies in the quality of the songwriting.

Stewart is a storyteller, but not one you can listen to passively. He turns phrases and speaks with vivid descriptions full of often-allegoric intent. The listener has something to decipher at the end of most tunes, which is admittedly a turnoff for some but is a welcome challenge for those who feel up to unpacking his messages and meanings.

From its opening keys to the acoustic strumming that follows and the haunting chains and accordion that close it, “Down to the Rio” is one of the album’s most memorable songs, and its transition into track three is perhaps the record’s greatest musical moment.

If any song rivals “Down to the Rio,” it is rough-and-tumble “Cleveland County Wine,” a true Wild West, bounty-hunter tale with Spaghetti Western undertones. Stewart is melancholy, sure, but not like when someone’s sad and writes an album while curled up in a corner with a box of cheese crackers.

This is an album that grits its teeth and confronts life’s hazards.

A drawback to Ghost would be that the Southern Gothic idea sometimes comes off as a heavy-handed effort to fulfill a concept. A lack of contrast dulls some of the album’s entrancingly downcast feel. There was room for more variance in tempo on the project as well, especially across a number of the slower, middle tracks.

“Down to the Rio” and “Cleveland County Wine” are standout tracks not only lyrically, but because they are the most distinct instrumentally. No one wants an album full of rattling chains, but taking that inventiveness further and into even more places could not have hurt the project.

However, Ghost hits much more than it misses and is a fresh take on Americana. Stewart clearly draws from influences like Bob Dylan and Townes Van Zandt, but the singer-songwriter finds a musical voice all his own.

Print headline: Ghost rock, Dylan Stewart and The Eulogists impress in its first release as a unit.

Dylan Stewart and The Eulogists

Giving Up the Ghost