Curator Michael J. Anderson reflects on the significance of Chihuly at OKCMOA 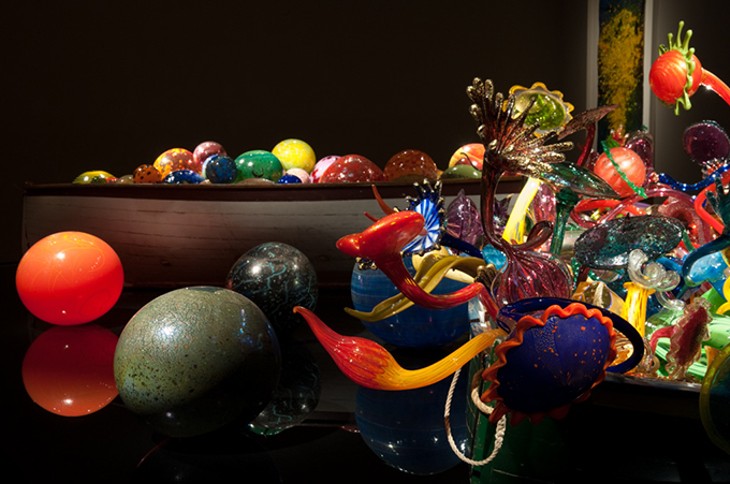 Museums all over the world display works by influential glass artist Dale Chihuly, but part of Oklahoma City Museum of Art is specifically built to house one. Chihuly’s 2002 work Eleanor Blake Kirkpatrick Memorial Tower is 55 feet tall, and the museum commissioned it as a signature piece, installing a sky-lit atrium to display the three-story sculpture in honor of one of its founders who died in 1997.

“Our building was essentially constructed around that,” said Michael J. Anderson, the museum’s director of curatorial affairs.

One of the museum’s first exhibits when it opened in 2002 featured works by the Seattle-based glass artist, and Chihuly’s work proved so popular with viewers that the museum brought it back two years later and purchased it for permanent display.

“Exhibition after exhibition, we’ve brought in a lot of popular exhibitions here, but … people almost always mention Chihuly as a favorite of our museum,” Anderson said. “So it really is the part of our collection that, for a large part of the public, we’re probably most associated with, and it’s kind of the most beloved part of our collection. We have lots of people in this community that will bring friends or family here when they’re visiting from out of town, and I would say very few of those people that visit don’t make at least a stop in the Chihuly collection while they’re here.”

Featuring examples of several of Chihuly’s signature styles, including his large glass Northwest Native art-inspired baskets, cylinders, Japanese-inspired Ikebana vases, Renaissance-inspired putti figures and more abstract oceanic “seaforms” and “macchia.” The collection, one of the largest permanent exhibits of the artist’s work, also includes Chihuly’s drawings and more unique pieces such as his “Seal Pups” and “Oklahoma Persian Ceiling,” which requires an overhead display that Anderson calls “one of the centerpieces of our museum.”

Chihuly’s desire to work in many different forms and his innovative techniques incorporating physical properties such as gravity and centrifugal force make him a significant figure in modern art, Anderson said, and the museum works to display these disparate pieces in the best possible light.

“He truly is one of the most important glass artists of the late 20th and early 21st century,” Anderson said. “In many senses, many scholars say he’s one of the most important glass artists since Louis Comfort Tiffany of the late 19th-, early 20th-century period. So he’s really this amazing glass artist who’s worked across a number of different series, who’s shown innovation and invention across those many series. So he’s really a leader in his field to begin with, but then beyond that, it’s just the beauty and the theatricality of his glass when displayed at our museum, where we have very low light and you see these just incredible pieces of glass that just jump out at the viewer.”

"It’s really one of the centerpieces of our collection." — Michael J. Anderson tweet this

The effort to provide viewers with the ultimate experience is ongoing, Anderson said, and the museum is constantly making adjustments to improve the displays, most recently by relabeling the exhibit to make it more user-friendly.

“It’s nearly always on view, and we kind of continually tinker with it in one form or another,” Anderson said. “It’s really one of the centerpieces of our collection, and we’re always trying to think of how to make it even more accessible and how to make it appear even more exciting to the viewer.”

Anderson said the exhibit is always one of the museum’s best attended, and when the collection was temporarily closed to the public for renovations, he remembers seeing lines forming before and after the renovation. People wanted the chance to see it before it closed and were excited to see how the exhibit had been improved. Displaying elaborate glassworks properly is a challenge, Anderson said, but one that the museum is always ready to meet to give patrons a chance to see Chihuly’s art in the right way.

“We take our stewardship of that collection very seriously,” Anderson said. “In general, more than anything else, these are works that you have to be very careful with the way you display them and very thoughtful with the way that they’re lit, which our staff does exceedingly well.”

Exhibiting glassworks presents difficulties and concerns that other artistic mediums do not, but Chihuly’s work also gives the museum a chance to get creative with its displays.

“In a way that’s not true for paintings, light passes through glass. So that’s one opportunity for these works,” Anderson said. “They’re very beautiful when they’re reflected off of black fiberglass or some very smooth, dark surface, so we play with that in the exhibition as well. It really is just a matter of finding the way that most brings these individual pieces alive in different sort of environments as you’re passing through the exhibition.”

The most singular aspect of OKCMOA’s Chihuly exhibition, Anderson said, is the scope it offers. Encompassing more than 30 years of his work, the collection allows visitors to see a variety of the works the artist has created throughout his career.

“What’s really unique about our exhibit is the scale,” said Anderson. “At this point, Chihuly is in more and more museums, and there are lots of Chihuly exhibitions, there are lots of individual pieces out there, but for us, the fact that we have one of the biggest collections of Chihuly glass and that it’s always on view and that it’s displayed in such a striking, engaging way — those are the things that really separate us. It’s kind of being completely immersed in the world of Chihuly.”