An exhibit at National Cowboy & Western Heritage Museum highlights the similarities of ceramics from all over the world. 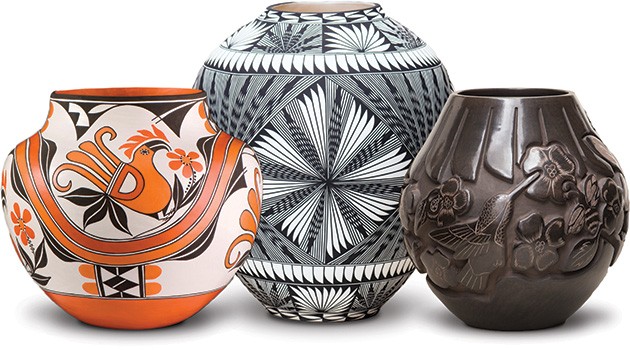 Curator Eric Singleton spent about seven years planning an exhibit offering an overview of centuries of ceramics in North America.

“I’ve just had it in my mind to tell a deeper, bigger story of ceramics in America,” said Singleton, curator of ethnology at National Cowboy & Western Heritage Museum. “So many people focus on the ceramic traditions of the American Southwest, particularly the Hopi and Pueblo people, but there is such a larger ceramic tradition in the Americas, specifically the American Southeast. … The Cherokee, the Chickasaw, the Choctaw, the Quapaw, the Caddo, they all have these amazing ceramic traditions, and I felt like it’s always been kind of outside of the general public’s purview. They don’t really see that, and so it was really my desire to show an exhibition that talked about all the ceramic traditions in the Southwest, the Great Plains and the Southeast.”

Colors of Clay is on display through May 10, 2020 at National Cowboy & Western Heritage Museum, 1700 NE 63rd St. In addition to giving viewers a broader view of Native American ceramic traditions, the exhibit also features text panels, photographs by Edward Curtis of Caddo artist Chase Earles at work and four videos showing Southwestern artists coiling and firing vessels in an effort to explain the process of making ceramics.

“I’ve always had so many people wonder, ‘Well, how did they make ceramics? What is tempering? What is firing? What does that mean?’” Singleton said. “So the exhibition gave me the opportunity to describe that as well and talk about the different types of temper that go into clay, which harden the clay, and talk about the firing process and the coiling process. It’s really a rewarding exhibition. I think it came across very well.”

“They stretch back through time; they go back hundreds of years, but the bulk of them are pretty contemporary,” Singleton said. “They are an evolution because they’re really made as an art form today, whereas before they would have been a ritualistic form or a utilitarian form. So you see a lot of the painting that’s done on them is a lot better. It’s a lot more skilled; it’s a lot sharper, cleaner, but the forms are basically the same. The iconography is the same. It’s very similar, but those that are doing it today are doing it expressly for the purpose of creating an art object, not a utilitarian object.” 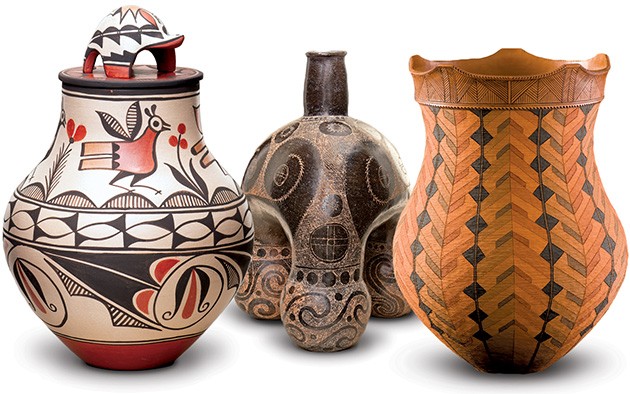 Even casual observers can see the distinctions between ceramic works made in different regions, Singleton said.

“The form may be very close to the same, but the color is different,” Singleton said. “They’re using a totally different type of clay, which means it’s going to be a different color. The painting on it or even the incising is different. And I think what’s happening, too, is the stuff that’s being created in the Southwest is watertight. You can use it for water vessels. They’re going down to the river and filling it full of water. That did not occur in the Southeast. The Southeastern stuff is water-soluble, so that means they’re probably not firing it at as high of a temperature, and they’re certainly not firing it for as long, so they’re able to make pieces that look like a cat monster. They’re making human forms and animal forms that are ceramic, whereas in the Southwest, you’re typically getting bowls and jars.”

Non-Native people are typically more familiar with Southwestern ceramics because of the timeline of American colonization, Singleton said.

“I think that it got more attention because in the 1880s with the completion of the railroad,” Singleton said. “European immigrants, Americans are starting to move into these areas, and they started to acquire this stuff as trade goods ... so it just happened to be that there’s a lot of people going to the Southwest at just the right time. I think that’s what really captivated them and catapulted the Southwestern tradition over any of the rest. Another reason for that is Europeans landed on the East Coast and so a lot of the people that would have been descendants of the Mississippian people, their cultures were just destroyed at a much earlier date.”

Singleton said visitors to the museum appear impressed with the exhibit, which also illustrates the universality of ceramics in human civilization.

“People really seem to have been pretty taken with it,” Singleton said. “People really like ceramics, and I think you kind of are drawn to something you understand. People all over the world understand ceramics, and one of the things we did in this show as well is I created a timeline, which puts all the ceramic traditions in the Americas side by side with their equivalent traditions all over the world. So we have some of the first ceramics here, and then we show Mesopotamia and ancient Persia and Japan and China and ancient Greece. So it’s kind of nice to see art here being put on the same pedestal in the same way as ceramic art forms from everywhere else in the world, because there’s no difference.”

The misconception that Europeans brought civilization to the Americas is based on an uninformed and myopic worldview.

“For a long time, I’ve been trying to reinforce to people that this idea of a clash between an old world and a new is just a complete misappropriation and misunderstanding,” Singleton said. “What you’re really looking at is the clash of two worlds, and that, in fact, is the clash of two old worlds. … The height of the Maya is complemented with the rise of Greece. When Caesar was crossing the Rubicon and Rome was moving throughout the world, so were the Maya and the Hopewell people in North America. So there was a lot of really cool stuff happening here.”