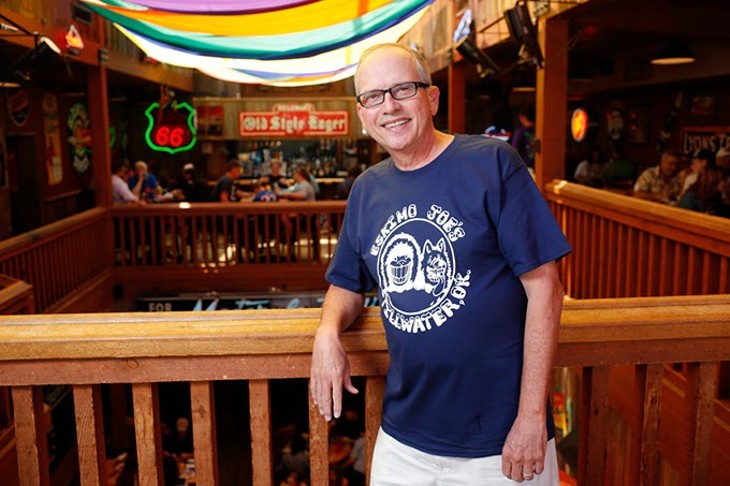 Stan Clark could have spent the entire day on the couch. Instead, he spent 40 years creating some of Oklahoma’s most popular restaurants.

But even that is not the true secret origin of Eskimo Joe’s, which celebrates its 40th anniversary this year.

For Clark, it goes back to his father.

His dad traveled often for business, but when he was home in Tulsa, he entertained and regularly invited business associates, clients and suppliers over for drinks at his cozy home bar. His combination of entrepreneurial spirit and hospitality stuck with Clark.

“It had everything to with my choices,” he said. “They were lots of fun, drinking and playing pool.”

So it’s little wonder that when Clark and childhood friend Steve File opened their bar, they mimicked the welcoming atmosphere and sense of fun Clark saw modeled by his father.

The original Eskimo Joe’s bar still sits at 501 W. Elm Ave. in Stillwater, but it’s a fraction of what is now nearly half a block of restaurant and retail. Over the years, addition after addition was added to the tiny stone building. The T-shirt display space is now larger than the original venue.

The menu also is exponentially larger than when it opened its doors on July 21, 1975.

“It was a simple business. We served 3.2 beer and Frito Lay snacks,” Clark said. “We had a pool table, a pinball machine that took dimes and two foosball tables.”

Joe’s was known for great music, too. Rather than asking patrons to pump money into a jukebox, the bar spun Western swing, cosmo cowboy and other interesting genres on a record player.

And after someone brought in Juke Joint Jump, an album by famous Oklahoma blues and country rock musician Elvin Bishop, its eponymous first track played frequently.

Immediately after he heard the first line — “There’s a jumpin’ little juke joint way out in the sticks, half a mile down a dirt road off-a Highway 6” — Clark said he knew it fit the venue.

And that is how Joe’s became Stillwater’s Jumpin’ Little Juke Joint.

But music and ice-cold beer almost caused its downfall, too. In 1983, the state’s legal drinking age was raised from 18 to 21 and effectively cut Joe’s clientele base in half. Clark said that final Saturday night before the law took effect, the venue was a wall-to-wall “madhouse.”

“Back then, we had to close at midnight and we couldn’t be open on Sundays,” Clark said. “I thought, ‘How am I going to stay open?’”

Using his business degree from Oklahoma State University (OSU), he reflected on what he learned in a macroeconomics class. 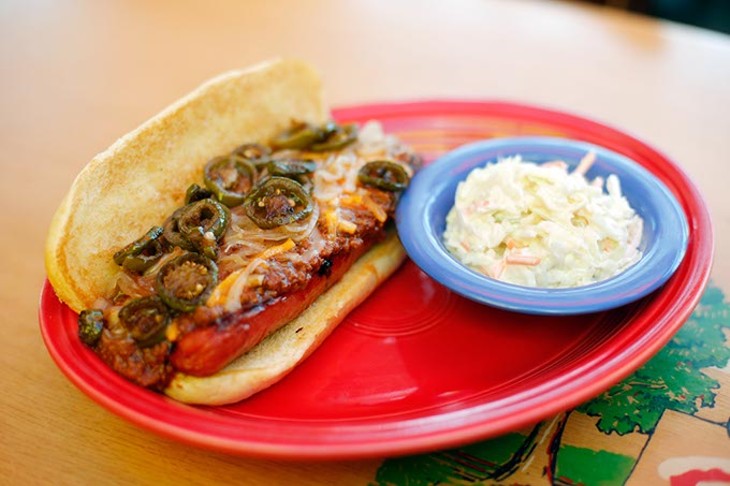 The playing field had changed, and Joe’s needed to stay nimble, so the bar became a restaurant.

At first, the menu was small and focused on doing a few things — fresh-cut fries, the Joe’s Special burger, the Little Joe onion burger and the Joe Dog — very well.

Its “famous” cheese fries were on its menu from day one, but they became an iconic signature dish in 1990. President George H.W. Bush visited Stillwater to give an OSU commencement address. While there, he mentioned he had a beer and cheese fries at Joe’s, and the rest is history.

Grant Jackson of McCool Junction, Nebraska, was in Stillwater recently to visit a friend and make his usual visit to Eskimo Joe’s, where he and his friend always order cheese fries.

Few menu items feed the id as well as that dish. It’s a big plate of fresh fries, crisp and tender, covered in a gooey avalanche of melted cheese.

Clark said he orders them topped with sweet peppered bacon. And most guests request a cup or two of ranch dressing for dipping.

Even after four decades in business, Clark said there are still ways to improve.

The Joe’s Classic burger recently increased in weight by an ounce and is still one of Clark’s go-to lunches. It’s often served with fresh-cut Idaho potato fries on the side. The Little Joe grew into a quarter-pounder topped with a buttery brioche bun that complements the sweet, soft sautéed onions. Clark also tried the Frito chili pie studded with fresh jalapeños again after not eating it for several years. He said he will return to it more often.

While the menu still focuses on American classics, it has grown enough that it’s easy to leave a few gems untouched for a while.

Joe’s Fowl Thing, the venue’s popular marinated chicken sandwich, isn’t one of those. In fact, Clark said he hired the cook so he could get the marinade recipe and it has been a top seller ever since.

The Eskimo Joe’s concept didn’t begin as an eatery, but Clark said he’s lucky it became one. Opening up earlier, allowing younger patrons to come in and expanding T-shirt sales were vital to turning a little juke joint into a Stillwater staple. 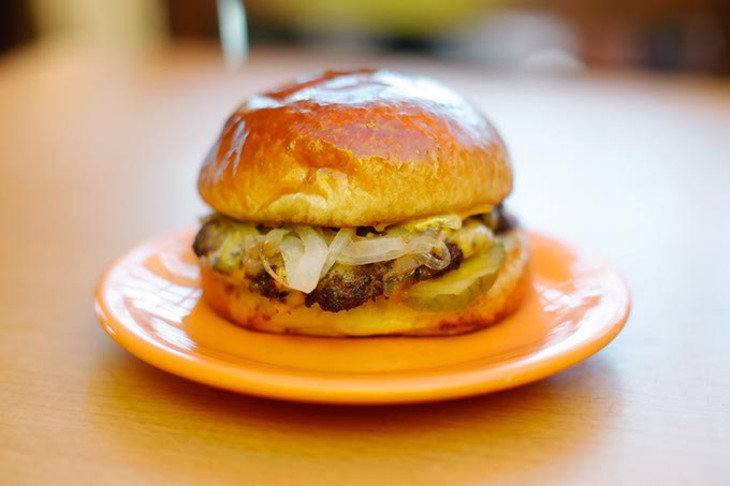 Each day, Stan Clark eats a lunch from one of his restaurants. Even with all that variety at the ready, a few favorites are ordered more often than others.

Eskimo Joe’s: The Classic Joe burger with sweet pepper bacon. “I’m also really partial to our chicken chili. I got the recipe from Bill Biard at the Hammet House in Claremore,” he said.

Mexico Joe’s: “The No. 1 is beef fajitas. We have the best marinade, and we use flank, not skirt steak.”

MoJo’s Rock ’n’ Bowl Grill: “I really love the catfish po’boy, made with farm-raised American catfish. And our mashed potatoes and gravy are the real deal.” 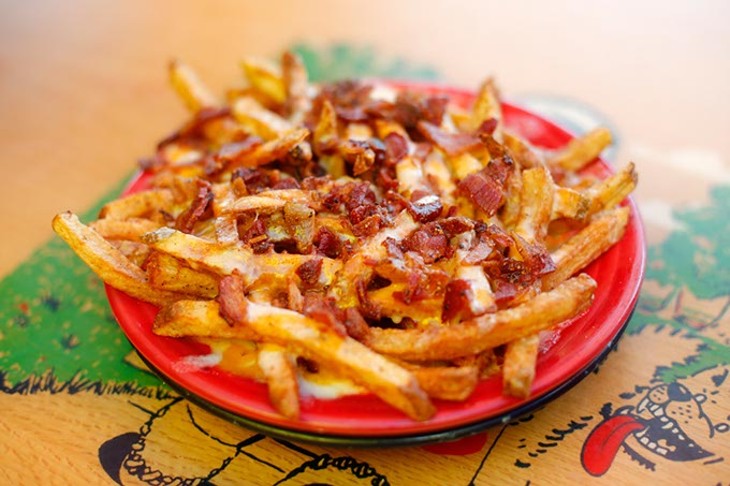 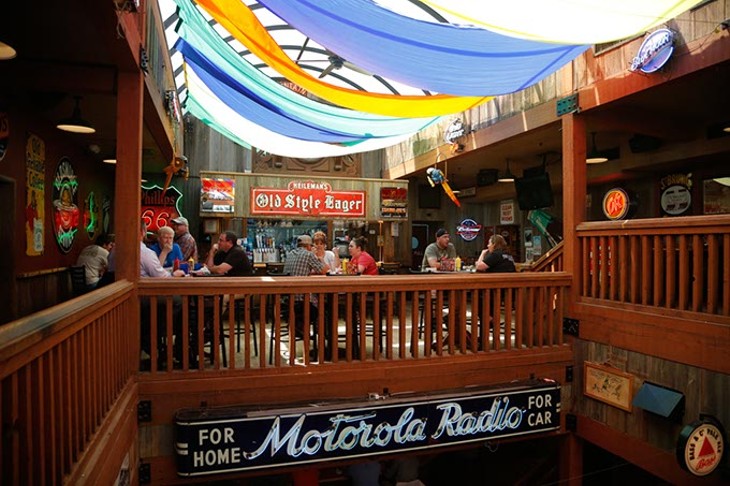