Gogi Go!’s original concept lays groundwork for a new Edmond location and beyond. 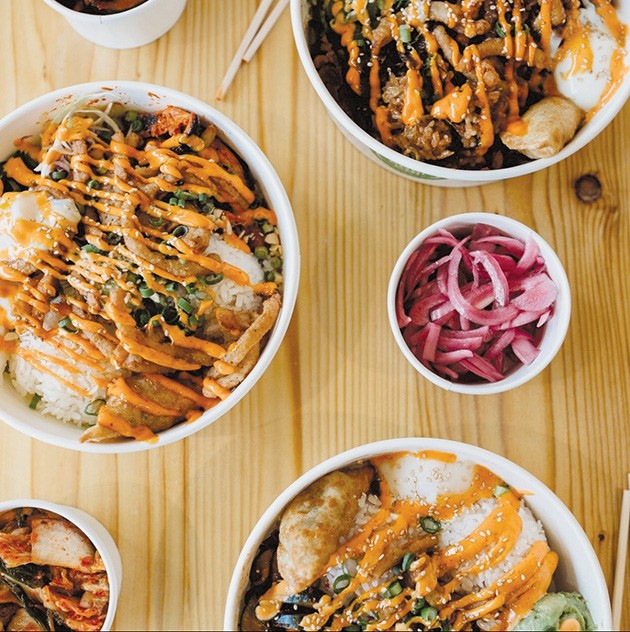 What works: Offerings are fresh and flavorful, and the ordering process is quick.
What needs work: Signature bowl items are listed on the website but not in the store.
Tip:You can order half orders of base items, like both rice and japchae.

Gogi Go! first brought its fast-casual, build-your-own meal concept to Midtown Oklahoma City in 2018 and is bringing its second location to Edmond Railyard this week.

After repeated visits to its original location, 1325 N. Walker Ave., not only do I think Gogi Go! will be a success in Edmond, 23 W. First Street, Suite 130, but it’s a concept ripe for expansion across the state and beyond.

Chef Kevin Lee along with business partners John Lee and Jason Chang had plenty of experience eating Korean food at local restaurants — John Lee’s family owned Del City’s Korea House from 1988 to 2002 — and they wanted to make Korean flavors accessible through an ordering concept modeled on Subway and Chipotle.

“With Gogi Go! in Midtown, I think we really achieved that by offering ethnic food in a comfort setting where you don’t have to explain things to people,” Kevin Lee said. “We’ve had some mom-and-pop Korean restaurants, but most people never went there because nobody spoke English or they had a hard time navigating the menu and trying to figure out what they wanted to eat.”

Gogi Go! makes the ordering process easy enough. Customers pick a base of steamed white rice, kimchi fried rice, japchae noodles or spinach and cabbage (they can also do half orders of two), which is topped by bulgogi beef, spicy pork, regular or spicy chicken or crispy tofu. The bowl is then finished with options you might find in traditional Korean banchan (side dishes served with every meal): cabbage kimchi, cucumber kimchi, pickled daikon, pickled peppers, soy-braised potatoes and much more. You can add mandoo (Korean fried dumpling) and an egg for an additional $1.50.

Bowls can be finished with Gogi Sauce (a bright pink spicy mayonnaise), Gogi pesto, ssamjang (sweet and spicy), sesame-ginger vinaigrette and a hot sauce simply called The Hotness. Customers can also get all of those ingredients wrapped up as a burrito or a smaller bowl ($7 compared to $9 for the regular bowl size). The lighter option was added after about a year of operation.

“The biggest mistake we made with our first Gogi Go! is that we only had one bowl size, and it was a pretty big bowl,” Lee said. “We quickly realized that people wanted a lighter option. With our second location, we’re really going to be hitting that small bowl and marketing towards that just because we have college and younger crowd. There’s not a lot of places you can get a full, fresh meal for $7 or $8.”

The price point is one of Gogi Go!’s biggest selling points. If I order a regular bowl from Gogi Go! with mandoo and an egg, it’s at least two meals — and maybe even three — for me. The blend of starch, protein and veggies is hearty and flavorful at a price point that is hard to beat. 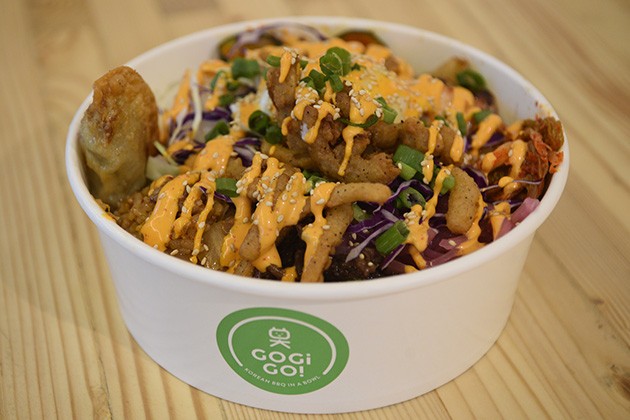 Lee said they will being experimenting more with seasonal flavors for topping options at both Gogi Go! locations going forward, building off things like pineapple kimchi in the spring and summer and Korean potato salad in colder months.

“We want to do more seasonal stuff because our menu is not very big and people might get bored too easily,” he said. “We’re going to have more seasonal specialties and staying innovative ahead of the curve. It’s easy to settle and sit back and be comfortable. We want to keep pushing the envelope and have something different to offer.”

I asked Lee his favorite bowl to build at Gogi Go!, and he prefers a combination order of kimchi fried rice and japchae as a base with spicy pork, red cabbage, cucumber kimchi and fried onions topped with Gogi Sauce and pesto.

Until a recent visit, I’d normally order kimchi fried rice as my base because it provides spicy and fulfilling heft, but the japchae is a real revelation. Made with sweet potatoes, the glass noodles are translucent and a satisfying gluten-free noodle option. They’re stir-fried in a mixture of garlic, soy sauce and gochujang (a red fermented chile paste that is both sweet and spicy that has a lot of kick to it). I highly recommend keeping a container of gochujang in your refrigerator to add some kick to marinades and sauces.

“Japchae isn’t something a lot of people have had,” Lee said. “It’s something light with a lot of health benefits.”

In general, Korean food is quite healthy because of its usage of many fermented products that are high in gut-healthy probiotics. As I’ve gotten older, it has been fascinating to see how much daily discomfort can dissipate through foods high in probiotics (sauerkraut, ginger, low sugar yogurt, kimchi). 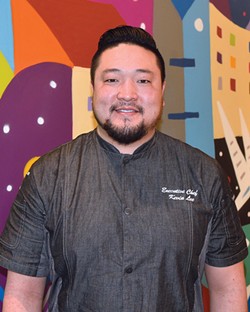 During a pair of recent visits, one eat-in and one take-out, to Gogi Go!, I was in and out within minutes, which speaks to the ease of ordering. Lee said the Edmond location will operate under a similar system, but its footprint will be smaller because it’s located in what is essentially a food hall.

“Our Midtown location is mostly geared towards lunch because there’s not much going on at night, especially where we are,” Lee said. “With Edmond Railyard, they have that big bar and more complementary retail spaces like an ice cream store and a pie shop; it can be a really fun and exciting place for Edmond to go hang out and have a good time.”

Lee just finished his year as culinary director for The Social Order (The Jones Assembly, Fuzzy’s Taco Shop, Texadelphia, Seven47 in Norman and upcoming Spark) where he has changed the Jones Assembly menu two or three times based on seasonal ingredients. He’s excited to usher in a new weekend brunch menu for The Jones the first week of February — the first new brunch menu since it opened.  Meanwhile, he’s working on the menu for Spark, which is located near Scissortail Park on Oklahoma Boulevard and opens in March.

Lee is one of the city’s best chefs, and it’s exciting to see his influence at both Gogi Go! and The Social Order. Here’s hoping more people get to experience Gogi Go! in Edmond and, hopefully, beyond.