The mural by artist Kris Kanaly inside Gogi Go might seem abstract, but look closer and you will find references to chef Kevin Lee’s life and influences.

There is the blue of the Bricktown Canal, but there are also references to Lee’s youth in Seattle, college years in Las Vegas and post-grad time in Korea.

For Lee and business partners John Lee and Jason Chang, the opening of Gogi Go mirrors the goals of second- and third-generation Korean-American chefs like David Chang (Momofuku) and Roy Choi (Kogi): to elevate Korean food to more accessible concepts.

“Growing up, none of my friends had Korean food,” Kevin Lee said. “Now, everyone knows bulgogi and kimchi, and it’s really cool to see how it has evolved into a cuisine that everyone wants to try.”

“It’s Korean food in a different setting, different environment,” he said. “People are used to going to a mom-and-pop restaurant where they don’t feel very comfortable, versus here [where] it’s more accessible and in a cool setting.” 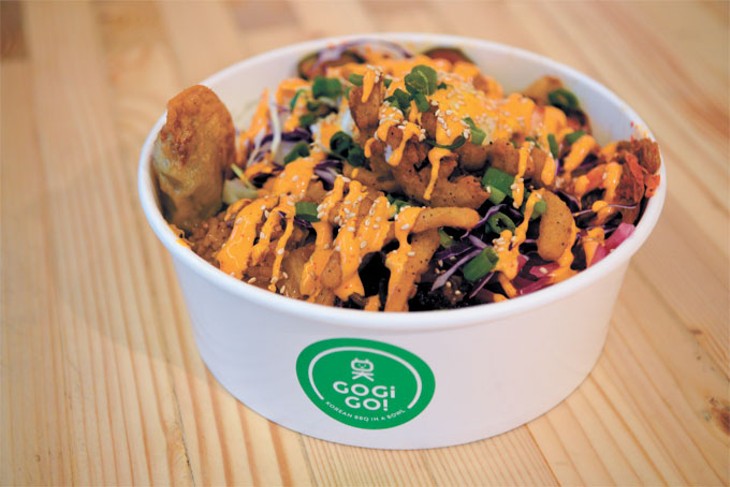 There are only five options on Gogi Go’s menu. Customers choose a preferred protein like grilled chicken, beef bulgogi, spicy pork or crispy tofu, then pair it with a starch like fried rice, white rice or japchae (stir-fried noodles). Finally, they top it with Korean banchan (pickled items traditionally served on the side) like kimchi, daikon and red onions.

Lee said the opening of a restaurant can be the most perilous time, as kitchen staff learn the menu, but he devised a system that allowed him to continue working at Vast while turning over Gogi Go to trusted staff.

“The execution has been pretty phenomenal so far,” Kevin Lee said. “It’s been a good month and a half so far. It’s the hardest part. There are not enough cooks in Oklahoma City to support all of these concepts, and they might not start out of the gate too well, but for us, the concept and people we have has been great.”

Partners John Lee and Chang approached Kevin Lee about opening a Korean concept a few years ago. Neither has a background in the restaurant business, but John Lee’s family owned Korean House in Del City from 1988 until 2002.

“It means the world to me because my family started in the restaurant business with my grandparents,” John Lee said. “My mom learned to cook from my grandmother, and I was always in the kitchen. It was important to me to do this to share the culture and Korean food. We want to make it more accessible. Our expectations have been exceeded. It’s been humbling to know that the city has accepted and supported us. To see people try the food and say it is delicious is a testament to Kevin creating a system that works. It’s all the hard work we put into the last 16 months. It’s satisfying to know it was worth all that pain and suffering.” 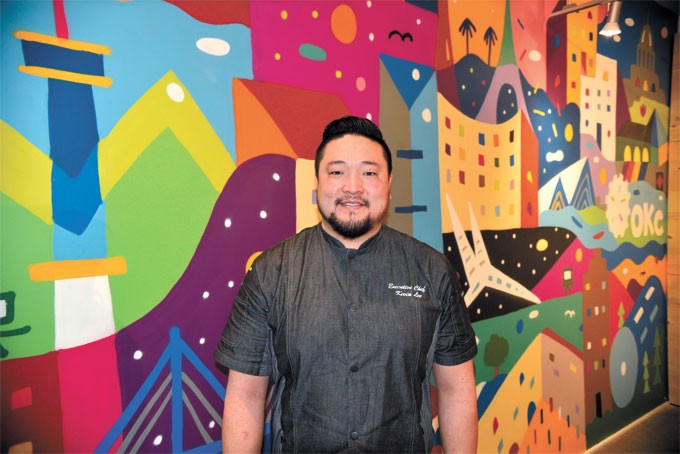 A walk along Walker Avenue comes with the smell of grilled meats wafting onto the sidewalk from Gogi Go. Even if the line to go through the counter service goes out onto the street, Kevin Lee said customers see their order topped with a perfectly sous vide-poached egg in about 12 minutes.

Delivering high-quality food quickly is part of the model that Gogi Go owners are planning to scale to other locations. Kevin Lee said scouting has already begun for a second location, something they are shooting for in 2019.

“We plan on scaling this business, so we want to build the right system and be picky about what we do,” John Lee said. “We do five things, and we want to make sure those five things are the best.”

Gogi Go will roll out specials including lettuce wraps for the summer through its social media. It recently debuted local beer and canned wine this weekend, which will be joined by patio service and Korean popsicles over the next few months. Its commitment to its core menu is modeled after other successful restaurants in the city.

“If you look at the restaurants that do well here: Empire [Slice House] pizza, Tucker’s [Onion] Burgers or Irma’s [Burger Shack], they’re all specialized,” Kevin Lee said. “The number two store is everything because if you don’t do well at number two, there is not going to be three, four or five. You have to be patient and pick and choose where we want to go. Location is important, and we’re lucky and blessed to be here. We want to make our second location just as good.”

Print headline: New generation; Gogi Go opens what owners hope is the first of many locations of its fast-casual Korean concept.