The familiar voice of Jimmy Collins bellowing, “Welcome to Jimmy’s! How are you doing?” is part of the reason Jimmy’s Round-Up Cafe & Fried Pies has become a southside institution while attracting customers across the region for giant yeast rolls and fresh country cooking.

Every customer who walks through the door at 1301 SW 59th St. receives a hearty greeting from Collins. On the off chance he’s not there, a server will fill in.

“I recognize faces. I’m not good with names,” Collins said, noting that he knows if it’s a customer’s first visit or not when they walk in; this opens the door for an icebreaker. “‘What are you hungry for? I didn’t recognize your money — I mean your faces.’  They get a kick out of it. It’s my line for first-time customers.”

First-time customers receive a free fried pie with their first meal and get a card for a free half-order of chicken-fried steak (which is the size of a large dinner plate) or catfish dinner to be redeemed within 10 days. On their second visit, customers get a coupon for a free breakfast. Customer appreciation and service is the hallmark of his cafe’s success, Collins said.

Collins opened his eponymous cafe in 1989 after getting his start with Tulsa-based United States Beef Corporation, the largest Arby’s Restaurant Group franchisee, operating over 365 restaurants across the country.

“I learned how to control a restaurant through the point-of-sale system: food costs, labor and sales. I was blessed,”

Collins said. “They could take over a franchisee that isn’t working and make it successful.”

Collins developed the recipes for the menu, which doesn’t cut corners, and cooks everything made-to-order. He developed the technique for the cafe’s famous yeast rolls that expand to softball size and are brushed with a glaze and served with cocoa-infused cinnamon butter.

He periodically posts a photo of himself to Facebook holding a giant pan of yeast rolls, which he says garners business from all over the region. Twitter includes mentions of Food Network’s Guy Fieri telling the celebrity chef to visit Jimmy’s Round-Up for its giant yeast rolls.

“It’s very skilled,” Collins said of the roll process. “We don’t machine-press them. It makes a horrible dinner roll. I pinch mine off [and they rise because of it].”

When Collins meets out-of-state customers, he said that 99 percent of the time, they’re coming because they saw a photo of the rolls on Facebook.

“On a Sunday, I might have 15 to 20 tables of people that have driven at least two hours to get here: Comanche, Woodward, Duncan. You name a town, they come because country people who like country food will drive.”

Renee and Mike Owens make the drive from Tuttle to eat at Jimmy’s Round-Up multiple times each week. 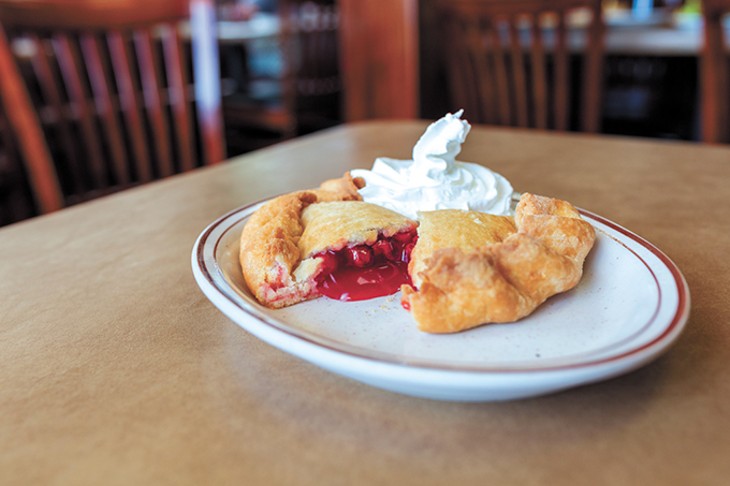 “You always get what you want, and it’s very good,” Renee Owens said. “I love their chicken strips, but I love it all, to  be honest.   We’ve eaten here for so long that we’ve tried everything.”

The top-selling entrees at Jimmy’s Cafe are the chicken-fried steak and the catfish dinner, the latter of which was added to the menu about 12 years ago and now nearly rivals the Oklahoma staple on the menu.

Collins said the key to a tender chicken-fried steak is not to allow the meat to sit in coating before it hits the fryer.

“The blood absorbs the flour, and that leaves you with a tough, tough chicken fry,” he said.

Just as servers mimic Collins’ enthusiasm with customers, the kitchen staff now handles all the recipes he developed.

“We don’t have staff turnover unless I want it,” he said, noting that his cooks have stayed with him for at least 14 years. He credits the kitchen staff — Humberto Ochoa, Alberto Cervantes and brothers Saul and Alfredo Marin — for preparing made-to-order food as quickly as possible.

A walk back into the kitchen shows that Collins isn’t lying when he says everything is battered and fried to-order. Chicken-fried steak and strips are reserved for one fryer, French fries and okra go in another, while catfish gets its own section. On the opposite side of the kitchen, a converted doughnut fryer is used to service the giant fruit- and crème-filled fried pies. 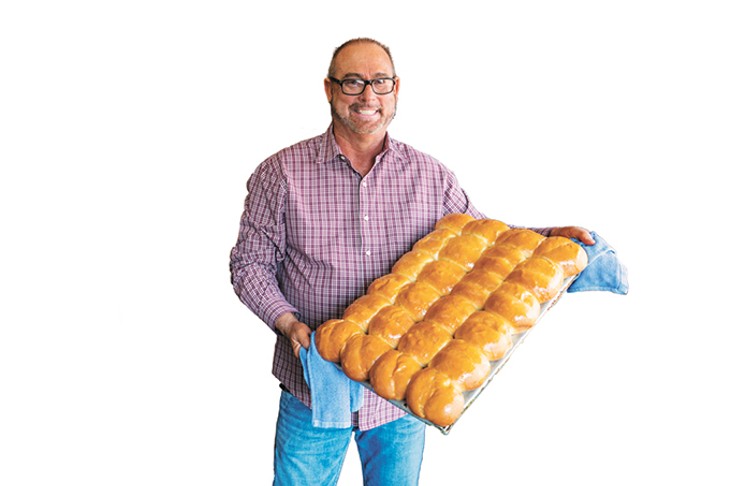 Collins added fried pies to the menu about seven or eight years ago, he said, building off the tradition started in the Arbuckle Mountains. It took six months of experimentation in the kitchen to develop the recipe.

“The [fried] pie was the most difficult thing to develop and put on the menu,” Collins said. “You have to get the right texture where it doesn’t fall apart or blow up in the fryer.”

A few years ago, Collins considered moving from the 59th Street location, but instead he invested in a remodel of the current location. He said business is up 38 percent since the remodel.

“That is insanity in my business. If anybody else could be in the same location for over 29 years, going on 30 in June, and were up single digits, they would be dancing in the street,” Collins said.

Even during a midweek lunch, the restaurant is operating at capacity, but there is hardly a wait, as tables turn quickly.

“When the line is out the door on the weekend and I see someone walking away to the car, I’ll go tell them that if I can’t get a table within 15 minutes, I’ll buy you a meal,” Collins said. “I’ve never had to buy a meal.”