“I saw it very up close, in person in a gallery environment,” said Opper, curator of The Art Hall. “I was able to get so close to it. Its detail and its complexity just struck me because she essentially does paper collage, but she uses thread and glue. … It’s just so complex, and the overall imagery is so unique. In Oklahoma, we don’t really know anything about Mardi Gras or voodoo culture or Cajun culture or the bayou. We don’t really know anything about that, but … I could tell that it was very much ingrained in all of that kind of folklore, and it just intrigued me because it’s something that I know nothing about. And then the aesthetics of the work is just extremely striking.”

Oddlokken agreed that her handcrafted collages are best experienced in person. 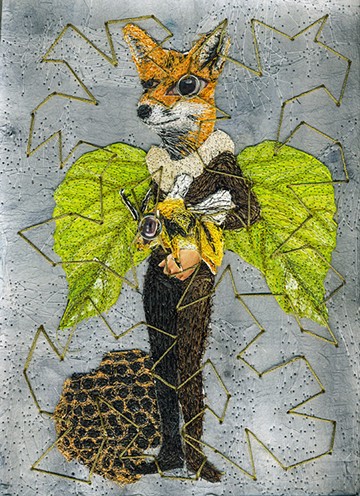 “I don’t think the photographs do it justice, honestly, and I’ve worked as a photographer for 15 years and God knows I’ve tried,” Oddlokken said. “You have to see it in person to see all the layers and levels and textures.”

The works in her Tiny Little Fables series are inspired by Louisiana folklore, her childhood in New Orleans and her fascination with the rural swamps outside the city.

“I was raised by a single mom and her sister, who was my godmother,” Oddlokken said. “She was agoraphobic and couldn’t leave the house, but what could have been a really catastrophic environment for childhood memories was a childhood of magical realism. I got birds that delivered Juicy Fruit gum on the windowsill. I got stories of a child that lives in a tree right outside of our window. Now, she wasn’t delusional. She was just trying to make the time pass. … My aunt never left the house except when there was bad weather or something she was concerned about; she would do a little voodoo ritual on the side of the house. … I thought it was just us, but it turns out it was very common to do that in New Orleans.”

The housing shortage caused by Hurricane Katrina required Oddlokken and her husband to move to the River Parishes about 20 miles outside of New Orleans, where she first began to appreciate the rural landscape.

“You have to see it in person to see all the layers and levels and textures.”
—Nonney Oddlokken tweet this

“I grew up in the city; I had asthma, so the minute I got into the country, I started wheezing,” Oddlokken said. “For me to just get to the store, I would literally have to drive through the swamps. … I started seeing alligators. I started seeing how the swamp changes from time to time. There’s a point of the year that just as far as you can see, it’s all yellow flowers, and other parts are all purple flowers, and all the critters. … This was all new to me and completely fascinating, and it’s so rich that I am just in love with it.”

Oddlokken’s goal for her artwork is to “erase the parish lines” artificially separating New Orleans from its rural surroundings in an attempt to “retell the story of southern Louisiana.” The collages in Tiny Little Fables feature Louisiana indigenous flora and fauna such as spoonbills and pitcher plants and mythological figures such as the werewolf-esque rougarou (represented here as a fox, a more common animal to the area) hand-sewn with gold thread that serves as a connecting “lifeline.” 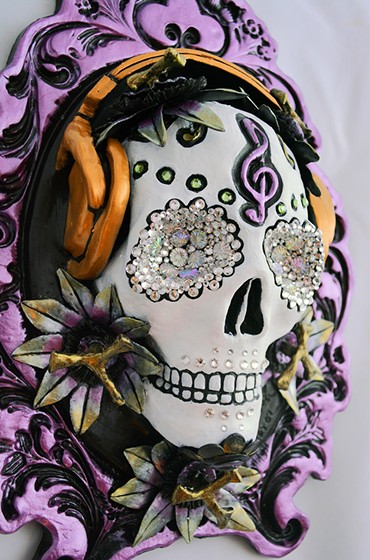 Nicole Moan’s work for the exhibition is inspired by fairy tales and The Lord of the Rings and includes ceramic corsets, fairy doors and a series titled “Hunting Down My Childhood” featuring hand-sculpted characters and emotions represented by animals mounted on hunting plaques.

“The clay talks to me,” Nicole Moan said. “I can go in and have something in mind, but the clay has its own shape and medium, so you can’t force something it won’t allow you to. … It becomes whatever it needs to become.”

She began making ceramic corsets about 20 years ago.

“I used to make fabric corsets, and they never seemed to hold up, and I couldn’t put three-dimensional parts on them to give it depth,” Nicole Moan said. “I’ve always wanted artwork where you can actually touch instead of it having to sit on the wall and you can’t enjoy it. … The first ones were really, really hard and rigid, kind of barbaric-looking. I went to school for engineering and automotive, so I understand how to build my forms to create the corsets on, so I have all the way from extra small to XXL, and I’m working on XXXL. It takes a little while to engineer each one. … I like a good challenge.”

The exhibition will also feature Aztrid Moan’s printed wall hangings and “upcycled wedding skirts” painted, dyed and printed to match Nicole Moan’s corsets. Aztrid Moan, the third generation in a family of professional artists, had her first gallery show at the age of 12 and can’t remember a time when she wasn’t making art. She often collaborates with her mother.

“She helps with a lot of my pieces, and we kind of go back and forth,” Aztrid Moan said. “We just bounce ideas off each other.”

Opper said the exhibition — which showcases “artists at different stages of their lives and careers, working together” — is the “biggest project that The Art Hall has undertaken.”

“This represents growth for us in terms of what we’re doing as a gallery and what we’re trying to do for the community,” Opper said.

Tiny Little Fables’ opening will be celebrated with a family-friendly Mardi Gras-themed party 6-10 p.m. Feb. 7 at The Art Hall with music provided by DJ Ostara and a fashion show of Nicole Moan’s corsets. Admission is free. Call 405-231-5700 or visit arthallokc.com.