In CityRep’s production of The Curious Incident of the Dog in the Night-Time, a teenage boy uncovers things about himself while investigating a dog’s murder. 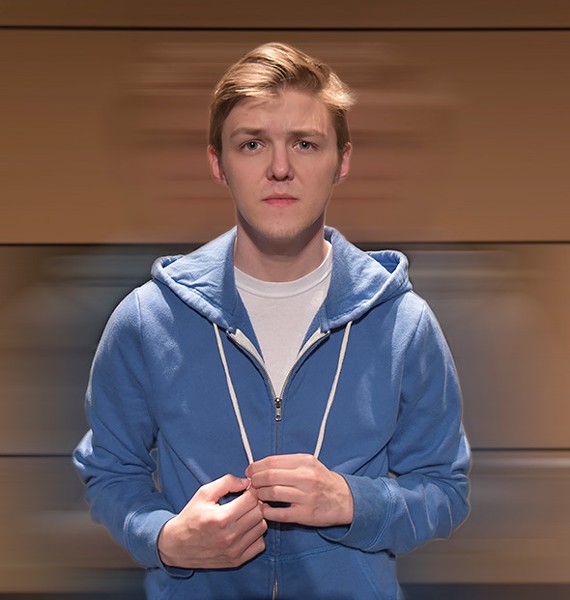 The Curious Incident of the Dog in the Night-Time

He woke up early, but Cameron Law was about to be late. On a trip to New York City in August 2015, Law was determined to see the award-winning stage adaptation of The Curious Incident of the Dog in the Night-Time, based on Mark Haddon’s best-selling novel about Christopher Boone, a 15-year-old boy whose quest to solve a dog’s murder helps him better understand his own neurodivergent behaviors.

“I was like, ‘I have to go see this play,’” Law said, “and they do rush tickets where you can buy discounted tickets for $30 instead of like $105 or something, so I woke up early to get mine because people line up outside the theater to get there when the box office opens. So I got there at like 5 or 5:30 in the morning. … There was no one in Times Square. There might have been like five people, I don’t know, but the red chairs that they have out there, those were in carts, like they hadn’t put them out. I was walking through Times Square, and it was so quiet. … I just sat there and waited, and I got my ticket and I put it in my pocket. So it’s like 9:30, 10, and I go throughout my day, and then I’m hanging out in two of my friends’ hotel room. We’re talking and stuff, and they’re like, ‘Aren’t you going to see a show?’ And I look, and it’s like 6:45, and the show starts at 7. … I was like, ‘Time to run.’ I run down the stairs of this hotel, and I bolt out the door. I’m sprinting down the street, and I get to the theater at like 6:58 or something. I get in and I get to my seat. The rush tickets are there at the front, so I’m sitting on the front row between two guys who have to sit there while I’m, like, [gasping for air]. And I hadn’t eaten anything because I just kind of forgot that I had the ticket. … I expended all this energy now, and then the play starts … and from then on, everything that had happened that day was gone. And I was just there in Christopher’s brain. … Here’s the funny thing. Christopher and I are the same age. Based on the information, Christopher was born in 1999 just like I am, so when I saw it, I was Christopher’s age. It was like I was up there, pretty much.” 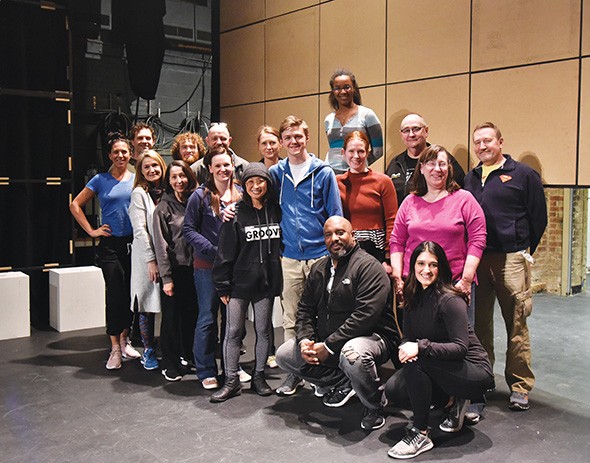 “It’s the first time in my life I literally wanted a rewind button so I could start it over right then,” Fairchild said. “I couldn’t start it over right then, so I went downstairs, got a ticket for the matinee the next day. … Both times, I was just like, ‘I have to do this play.’ … I just knew I had to do it, and I put it out in the universe pretty loudly.”

When CityRep artistic director Donald Jordan found out Fairchild wanted to be in the play, which he called “possibly the most significant” of this decade, he mentally added her to the cast list for the production he had been planning.

“She is, in fact, one of the leading actors in this region of the country,” Jordan said. “She’s incredibly well-respected, and she’s extraordinary. And she just said to me, ‘Gosh, I love that play,’ and at that moment, she was cast. She just didn’t know it.”

Law, an acting student at Oklahoma City University who will be making his professional debut, had to audition for his role, and he said he showed up “super early” to do it.

Director W. Jerome Stevenson, who also works as artistic director at Guthrie’s Pollard Theatre, said he was immediately impressed with Law’s interpretation of the character.

“I buy him,” Stevenson said. “I buy who he is, and I want to see this kid live out the story and see what happens. … We needed somebody who was inherently smart, somebody with inherent likeability, somebody who we could follow for two hours, even when we felt like they were drastically different from us, because the trick of the play is that he’s not. He absolutely isn’t. He’s very much like all of us in some way, shape or form.”

The relationship between Christopher and Siobhan, who narrates the play and whose instruction goes far beyond what “two plus two is,” forms the heart of the play, Stevenson said.

“What she’s teaching him is are broader concepts of dealing with nuance in people, in dealing with understanding the difference between what you think makes a person good and what makes them human, which is kind of tricky,” Stevenson said. “It’s nuanced stuff for adults; it’s particularly nuanced for a 15-year-old, and when you take a 15-year-old who doesn’t have the benefit of understanding a lot of integrated social cues, it’s really complex and interesting to watch.”

Choreographer Hui Cha Poos, founder and artistic director of RACE Dance Company, serves as the play’s director of movement. Though there are no traditional dance numbers, Christopher’s perception of events requires the actors to behave in a more stylized way at points.

“Because of the way he sees the world differently, it’s so much more freeing,” Stevenson said. “We can play with actors lifting him up to represent flight, and we could play with what it would look like for him when he first goes in a train station, how overwhelming and how acrobatic it could get. … The story is so straightforward. It’s his perception of the world that makes it unique.”

Rehearsing these movements has left Law — whom Fairchild described as “very brave” — with bruises.

“I crawl around a lot,” Law said, “but I’ve got I’ve got some kneepads that have been very helpful.”

But Law is not complaining. For him, playing the part of Christopher fulfills a dream that began in 2015 on that breathless night in New York City.

Though Christopher is never diagnosed in the play, CityRep has partnered with Autism Oklahoma and Oklahoma Autism Network to provide on-site information and resource guides about autism for parents and teachers. Tickets are $37-$42.