A local food charity raises funds with a scotch-tasting event. 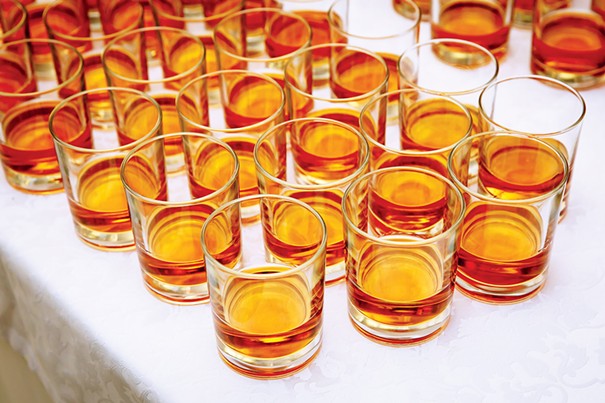 Whether reading the statistics about poverty and food insecurity in Oklahoma makes you want to find a way to help or to pour yourself a good, strong drink, a local charity is offering you the chance to do both.

“Oklahoma ranks among the worst in the nation for hunger,” Blacknoll said. “As a mom, I just wanted to do something to do my part to make sure there aren’t as many kids going to bed hungry at night.”

According to U.S. Department of Agriculture’s 2017 report Household Food Security in the United States, 15 percent of Oklahoman households surveyed experienced “low or very low” food security, a “statistically significant” difference from the U.S. average of 12.3 percent. Blacknoll, who also works at Boeing and owns LUX baby bottle company, said the more she studied Oklahoma’s poverty and hunger rates, the more serious she realized the problem was.

“I kept researching and researching and found out that all of the statistics about Oklahoma and hunger are true,” Blacknoll said. “For whatever reason, I didn’t know that hunger was that bad in the state. … I thought we, at least, could do our part, and we also want to share with others that hunger is a major problem here in Oklahoma, and we want to do something bigger to fill that gap and try to entice more people to get involved.”

“Our transformed school bus has farm crates that line the outside,” Blacknoll said. “We take this directly to schools, and the entire school is allowed to come out and fill their bags with fresh fruits and vegetables for nights and on weekends when there are the most issues with hunger.” 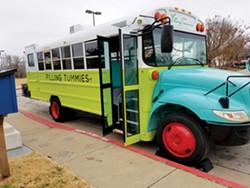 According to the Food Research and Action Center report A Half Empty Plate: Fruit and Vegetable Affordability and Access Challenges in America, 12.2 percent of Oklahoma households with children have difficulty accessing affordable, fresh produce.

“Kids could live in an area where there’s nothing but convenience stores,” Blacknoll said. “There’s places right here in Oklahoma City and our surrounding area with no access to healthy food, so when they are eating, they’re not able to get the proper nutrition. We believe this is correlated with the education of children. They have to have food, and healthy food, so that they can think and have a chance to be at least level-set with the other kids from different states. We believe that feeding the kids first will improve their education.”

The more people like her realize the problems children have accessing food, Blacknoll said, the more people will feel a responsibility to help.

“The personal stories are completely heartbreaking,” she said. “The closer you are to something the more you learn, and so by learning and hearing the details … it makes us want to do even more. Our board is largely comprised of moms, and what I want to do is pull in other moms who are willing to help feed other mothers’ children. … I thought if we were to let other moms and women know that these children were suffering, that they would join in and help us.”

Sympathy for hungry children, Blacknoll has discovered, is more than a maternal instinct.

“While my focus was initially on mothers, the men also feel just the same,” Blacknoll said. “They’ve been just as close and heavily involved with supporting, especially the volunteers who have been with the kids on the days of distribution. We would love to have more men involved.”

While food insecurity is a serious issue, Blacknoll said Cheers 4 Charity is intended to be a good time, offering a new experience for many of the Filling Tummies volunteers and donors.

“We wanted to do something fun and something that was relaxed,” Blacknoll said. “By all means, we are no experts in scotch, so it’s something different that not everyone knows about, so we hope that the event will be great for those who love scotch and who love whisky, but also as enjoyable for those who just like to eat and drink.”

In addition to “gourmet, mouth-watering appetizers” from McNeal’s Catering with Class and Moore’s 3 Star Barbecue, Cheers 4 Charity offers an Omertà Cigar Bar and a presentation by “scotch aficionado” Bill Brittain.

“We want people to feel like they’ve come out to support a good cause but that they also can have a good time, and it’s not necessarily the traditional gala or dinner,” Blacknoll said. “We are planning to have some scotches that will indulge scotch lovers’ whisky fantasies. We’re also planning to have cigars that we believe attendees will love, including some new boutique cigars. We are going to provide some brands that they likely would not find outside of a tasting event.”

Ultimately, Blacknoll said, she would like to raise enough funds to help every hungry child she comes in contact with.

“Whenever we go, we’re providing food for 400-700 students,” she said. “When we show up, we’re feeding the entire school, and it’s quite the effort to make sure that everyone’s able to put whatever they want in their bag. We’re looking to give them the opportunity to fill a complete bag to take with them. … We’re not standing over them, telling them, ‘You can only have one or two,’ but we are reminding them to make sure that they share with their fellow students. We don’t want them to feel there’s a limit because there’s so many limitations, and food, if you’re hungry, healthy food shouldn’t have a limitation. Everybody deserves to eat. Everyone deserves to have access to healthy food.”