Google Fiber technology might find a new home in OKC 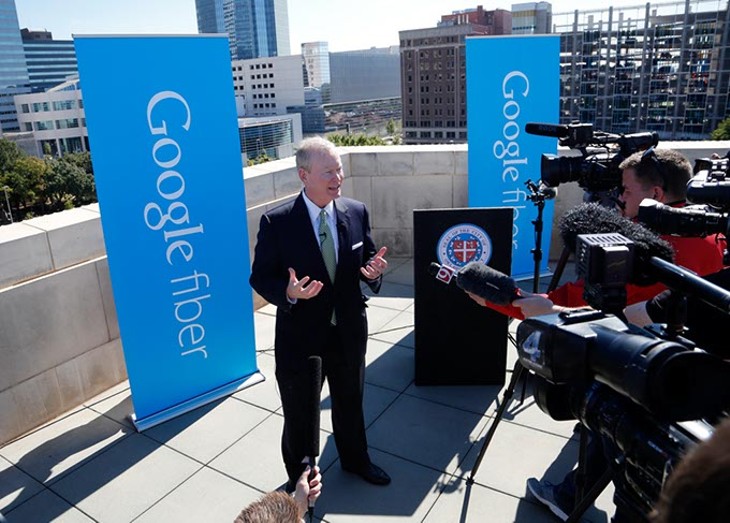 The University of Central Oklahoma student said if the metro had Google Fiber, it likely wouldn’t influence his Web design and programming assignments too much. However, it would revolutionize how he and his fellow college students use the Web.

“Most students are very active with media streams, whether it be Netflix or various social media sites,” Power explained.

Already a user of many Google applications, Power finds Google Fiber’s offerings in the three cities it now wires — Kansas City metro; Austin, Texas; and Provo, Utah — impressive. He believes the 1-gigabit-per-second Internet speed offered by the technology company would be a community upgrade, benefiting anyone who uses the Internet.

“Provided that the network is up to par with Google Fiber, you would be able to stream without any delay,” Power said when describing the speed. “You would have little to no lag time. There would be no stops or chops. We often see network slow down when a whole bunch of people are on. … With Google Fiber, hopefully, we will see that the network slowdown would cease to be a problem.”

Google makes it easy for area residents to be roused by the thought of Oklahoma City becoming the next “Fiber city.” On its website, fiber.google.com, a demonstration shows just how quickly Google Fiber can download 100 photos. In a blink or two, the download is complete.

In addition to residential benefits, city officials and business leaders believe Google Fiber would boost business recruitment and further spur innovation. With an already thriving entrepreneurial community and the development of the innovation district, the addition of Google Fiber could mark the city as a tech hub for future growth.

“I think it fits very well with the growing entrepreneur community,” said Scott Meacham, president and CEO of i2E, a private, nonprofit corporation that mentors many of the state’s technology-based start-up companies. “I think it is another step forward in the process of Oklahoma City becoming a great environment for entrepreneurs and start-ups.”

Google’s Jill Szuchmacher said OKC’s efforts to support entrepreneurs and small technology companies stimulated the company’s interest. On Oct. 28, Szuchmacher, along with Mayor Mick Cornett, announced Google would work with city leaders on the potential to bring the fiber speed to the state’s largest city.

“It is no wonder why nonprofits like The 404 and i2E are investing in the entrepreneurial community here, and we would like to do the same,” said Szuchmacher, director of expansion, during the recent press event on the rooftop of Oklahoma City Museum of Art. “We would like to bring Internet connectivity that is up to 85 times faster than broadband speed to Oklahoma City.”

While Google’s announcement is promising, company representatives will research a number of factors over the next few months before finalizing an agreement. Existing infrastructure, area topography and the permitting process will influence Google’s final decision, Szuchmacher said.

The city stands ready to assist in the joint planning process, Cornett said. If it becomes a signed deal, thousands of miles of fiber network would be added to the city.

Kansas City witnessed a tech evolution after Google Fiber began serving users there in late 2012. Matthew Marcus, an entrepreneur living in Boulder, Colorado, headed to his hometown, which was picked for the first wiring of Google Fiber. He owns the building that first connected to Fiber and won’t forget seeing the blue LED light appear on the Fiber jack box. He co-founded Kansas City Startup Village, an organization that supports the launch of new technology companies. He said the connectivity pushed that city into the ranks as a tech capital.

“There have always been entrepreneurs in Kansas City as much as there have been in other cities,” Marcus said. “It was a somewhat quiet environment. Then, all of a sudden, you have Google bringing a service to your city that no other city has. … It was like a lightning rod for activity.”

A fiber network brings more benefits than faster Internet and stimulated economic development. Trade group Fiber to the Home Council Americas studied the impact of gigabit speeds on economies. Communities with access to gigabit broadband also benefited from home value increases of up to 3.1 percent and growth in their gross domestic product (GDP), a measure of an economy’s size.

Ken Dewey, a professor in Rose State College’s computer science program, sees another advantage: low cost. What Dewey finds impressive is the pricing of Google Fiber’s basic Internet package. For example, in Kansas City, users can sign up for a service with up to 5 Mbps download and 1 Mbps upload speeds for no monthly cost; however, there is a $300 construction fee that can be split into payments of $25 per month.

“You have people out there who can’t afford Internet,” Dewey said. “Now, they are going to be able to get it for free. … Some of our students come to Rose State after-hours because they don’t have Internet access.”

Dewey believes a majority of people would find the basic service fits their needs. For those who want the gigabit speeds, pricing is competitive with OKC’s major Internet providers. Looking at Kansas City’s pricing, the gigabit service runs $70 per month. Adding television raises that price to $130 per month.

In some Google Fiber cities, there are reports of improved service and price parity by longtime providers. In May, Cox Communications rolled out its Gigablast Internet service — comparable to Google Fiber in speed — to select areas, with Oklahoma pegged as a future location.

No matter which company brings ultrafast Internet speeds to OKC first, it’s destined to be a game changer.