At Little Mike’s, onion burgers are served with a side of conservative political humor

The GOP politician’s endorsements of Laham have nothing to do with policy, but for his venerable onion burger establishment Little Mike’s, 6724 Northwest Expressway, which Laham said Lankford referred to as the most conservative restaurant in Oklahoma.

A “made in the USA” sign hangs below a yellow-and-red Little Mike’s Hamburger sign and can be seen clear as day from across busy Northwest Expressway. Laham said he added the sign not long after Donald Trump was elected president in 2016.

Laham wanted potential customers to know where the beef in his hamburgers came from.

“I know a lot of places use beef from Mexico, and that’s not regulated very well,” Laham said. “When you see two double cheeseburgers for $3, I wouldn’t trust it.”

Laham added an eight-foot U.S. flag not long after 9/11. He began printing out and posting conservative cartoons and memes during the Obama administration. Hillary Clinton, Rachel Maddow and Colin Kaepernick are satirized in prominent space by the grill, Harvey Weinstein jokes line the wall leading to bathrooms, and the western corner of the restaurant’s wall features jabs at mainstream media and U.S. Senator Bernie Sanders.

Each tabletop has three of the same chain emails printed and placed within view. One laments the rising tide of “political correctness,” another mocks House Minority Leader Nancy Pelosi and a third details a veteran’s fight with a homeowner’s association to fly a giant U.S. flag.

“The people that don’t like it still come in and eat,” Laham said. “We joke about it and have good banter, but 99 percent of the people that eat here love it. People bring friends from out of town to see the pictures.”

I’ve always wondered what it would be like to eat lunch inside the email inbox of my Rush Limbaugh-listening, NFL-boycotting grandparents. In addition to adding the slogan “made in the USA,” Laham should consider “Little Mike’s — Our memes are as fresh as our beef.”

“I don’t know [how it started]; Hillary did something or Obama did something. I put one up and then two,” Laham said. I used to have a lot more, but we remodeled and I put up some Norman Rockwell pictures. We still put up stuff, but there is so much material that you can’t keep up.”

Laham opened the original Little Mike’s at 50th Street and Portland Avenue in 1979 after toiling with a fish-and-chips restaurant called Arry’s for five years. He opened another location in Quail Springs Mall in 1981, sold the original two locations and opened at the current location on Northwest Expressway in 2001.

“I did it for five years, but it wasn’t doing too well,” Laham said. “A friend of mine suggested hamburgers, so I put a little grill in there and I had hamburgers and fish and chips. The hamburgers took off, and I switched over.”

Little Mike’s menu features El Reno-style onion burgers as well as some of the requisite Oklahoma City burgers like the Caesar burger made with the same Little Mike’s dressing that is sold in select area grocery stores and a hickory burger, which is a take on the classic Theta burger. Little Mike’s has thrived even located across the street from a Johnnie’s Charcoal Broiler that was recently demolished and will reopen next year. It also has a good selection of hotdogs and salads.

Laham credited his success with good customer service and the ability of customers to see directly to the grill as cooks aim to get food out to the table in seven minutes or less.

In recent years, Little Mike’s has added a mushroom, bacon and Swiss burger, a fire burger with ghost pepper cheese and a chicken-fried steak sandwich to the menu. Laham’s wife makes fresh hummus that tops a black bean burger called the Garden Burger along with lettuce, tomato and cucumber. 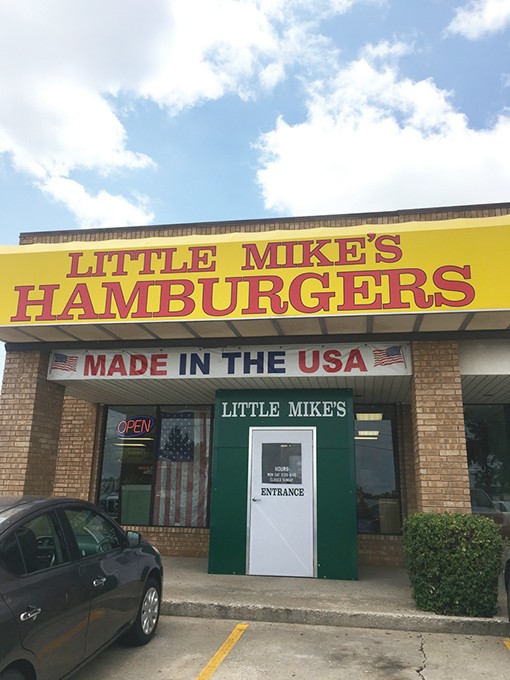 I had no prior knowledge of Little Mike’s overt politically messaging before entering the restaurant around lunchtime. I’m so used to restaurants keeping politics out of food that it was almost refreshing. I have fun skewering both the Democratic and Republican National Committees, so I could laugh at jokes roasting Pelosi but felt the impending guilt associated with the idea that America was only great when we ignored the opinions of anyone other than white men.

Little Mike’s food delivers a decent onion burger and fantastic french fries and onion rings. The method of slamming raw onions into one side of the burger as it cooks on the flattop misses the much-needed caramelization that comes from the onion spending some time on the grill. I didn’t notice the onion flavor on my bacon cheeseburger.

I liked that the restaurant kept toppings like pickles, lettuce and onions in a separate condiment bar so they didn’t get soggy sitting in the burger for too long. The fresh-cut fries were excellent.

I definitely know where I’ll be bringing my grandparents the next time they come to visit. There are much better burgers in Oklahoma City, but I know they’ll get a kick out of the décor, and the fresh fries and onion rings are worth the trip—even for the most delicate snowflakes.

What works: Fresh, hand-cut french fries and battered onion rings rival some of the best in the city.