The white building at the corner of 23rd Street and Lottie Avenue once housed a diner, but it had long been forgotten when husband-and-wife duo James and Shacopie Polk decided to renovate the space and pursue their dream of owning their own restaurant.

According to Dinerville, a website that tracks diners across the country, the building is a 1961 Valentine Diner, which is a prefabricated mail-order diner that came from Wichita, Kansas, and began to pop up across the country after the rise of the Interstate Highway System. The building is one of the few remaining Valentine structures in the state open for business, and T&T Chinese Food, 5501 S. Western Ave., is the only other operating Valentine structure in Oklahoma City. You might have noticed the vacant former Foodies Asian-American Diner in Midtown, which is another example of a Valentine diner in the Oklahoma City metro area.

The location at 2319 N. Lottie Ave. operated as an income tax office until around 2014, according to RoadsideArchitecture.com, and opened as Polk’s House in 2017 after heavy renovation by the Polks.

The slogan they added to the side of the building caught my attention while I was driving west on 23rd Street: Gourmet food at an affordable price. James Polk has years of experience in professional kitchens, and his wife leans on years of cooking family recipes to create a menu that is centered around Southern-style home cooking “that only a brother from Idabelle [sic], Oklahoma can provide,” Polk’s House website says.

Not only does walking into Polk’s House feel like stepping into a time machine — I’m not sure I’ve ever been in a diner quite like it before — I understand why it has the name because it’s like ordering from someone’s home kitchen, if they had credit card readers.

There is limited parking on the side of the building, but customers can park in the adjacent strip mall lot, and there are a few tables and chairs outside on the sidewalk, but I have a feeling Polk’s House mostly operates as a takeout restaurant. 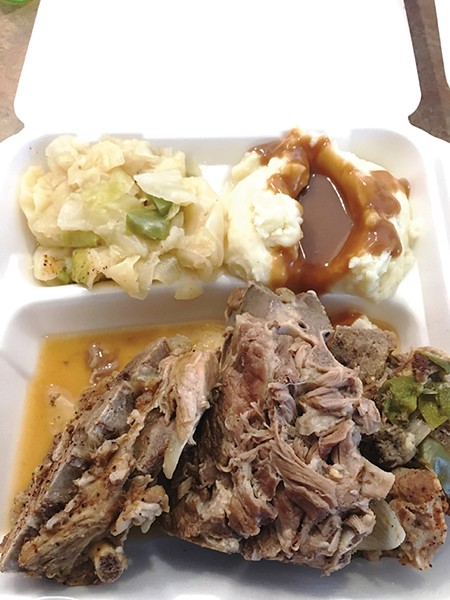 The menu is centered on staple items like corn meal fried catfish with fries ($6), fried chicken and waffles ($8) and a crab boil ($15) with sausage, artichoke, jalapeños, corn and potatoes. Its gourmet side comes out with salmon croquettes ($8) and its house burger ($8), which tops a half-pound beef burger with grilled shrimp ($8), jalapeño cheese and is served with waffle fries. I’m not sure I’ve seen a surf-and-turf-style burger quite like it.

The BJ Burger is the restaurant’s top seller ($7.50). The half-pound burger is topped with chili, cheese and a fried egg. The restaurant also serves daily specials that trend to comfort food classics like chicken Alfredo, chicken-fried steak, beef stroganoff, grilled pork chops and steaks. Specials are served with two sides and bread for $10.86. Sides rotate depending on the day, but you will see everything from mashed potatoes with gravy to country green beans and roasted potatoes.

Specials are not only classic American comfort food; they also sell enchiladas, quesadillas and chicken teriyaki with egg rolls or get fancy and pair roasted Cornish game hen with dressing or prime rib with asparagus. I’d say it delivers on its slogan. You don’t see game hen on menus very often, especially not for less than $11. I recommend following Polk’s House on Facebook to keep track of daily specials, which will often be announced a few days in advance.

The restaurant is open for lunch Monday-Friday and adds late-night dinner hours Wednesday-Saturday (until 2 a.m. on Saturday nights, 11 p.m. otherwise). On Sundays, they serve 1-7 p.m.

I stopped by on a recent Sunday right as they opened the doors just after 1 p.m., and almost like a dinner bell getting rung, a few people quickly popped up behind me to place orders.

I got a pair of daily specials to go with cornbread. I ordered meatloaf with greens and yams and slow-cooked neck bones with mashed potatoes and gravy with steamed cabbage. Service was quick and friendly, and as I clarified my order to make sure the meatloaf order included greens and sweet potatoes, another gentleman in line piped up with, “Oh, that’s a great order.”

Specials on that day also included liver and onions and hog maws. Believe it or not, I like liver and onions, but I’ve never been able to get into chitterlings or hog maws, whatever your preferred nomenclature for pig intestine. I know they are one of the most divisive food items, with fervent detractors and defenders.

My favorite entrée of the day was the neck bones; I received three large portions that had plenty of meat between the bones. It was cooked with onions and peppers that made for nice gravy.

I’m a big meatloaf fan; it’s one of the first things I learned to cook as a preteen. The ketchup-based sauce caramelized and had a nice flavor, but I wanted more moisture in the loaf. I’d recommend increasing the amount of egg mixture or using a variety of meats with different fat contents.

The sides hit the spot with the greens and yams stealing the show, just as the gentleman in line predicted.  The greens weren’t bitter or cooked to death and were served with large flecks of pork.  It’s hard to ever go wrong with a stewed sweet potato or yam.

I appreciate Polk’s House for providing such interesting food at a great price point. It’s a cherry on top that it comes in a unique setting that is a window into the country’s roadside eatery history.

What works:The price point and comfort classics like neck bones, greens and yams are great.