Oklahoma’s 55th legislative session kicked off Monday with the governor doubling down on the themes of her inaugural address, a timid protest against the proposed “hoodie  bill” and a House floor fight that reinforced the Democratic party’s super minority status.

“My challenge is to use this session to unpack how the state is spending its money, and we should begin by addressing the structural problems that we face today,” Gov. Mary Fallin said in her State of the State address.

With the aid of charts at her side, Fallin highlighted the state’s growing tax revenue but the declining amount lawmakers have to spend.

Fallin’s 34-minute speech in front of a joint Legislative session included an appeal for lawmakers to invest in education, incarceration reform and health care, three areas the state consistently performs low in.

“Oklahoma has some great forward momentum, but there are some obstacles we must face head-on,” Fallin said.

A projected $300 million budget shortfall has most agencies facing likely cuts even while the Department of Education, Medicaid and Department of Corrections are requesting over $500 million in increases.

Fallin said she supported increases in education funding by as much as $25 million but centered her address on increasing partnerships between schools and the business community to create more career-ready graduates, including the launch of Oklahoma Works, a new program that helps develop those types of partnerships.

“These partnerships allow high school students to be concurrently enrolled in classes and [prepare] for a career they choose,” Fallin said. “Currently, Oklahoma’s workforce is not meeting the education levels needed to sustain potential job growth.” 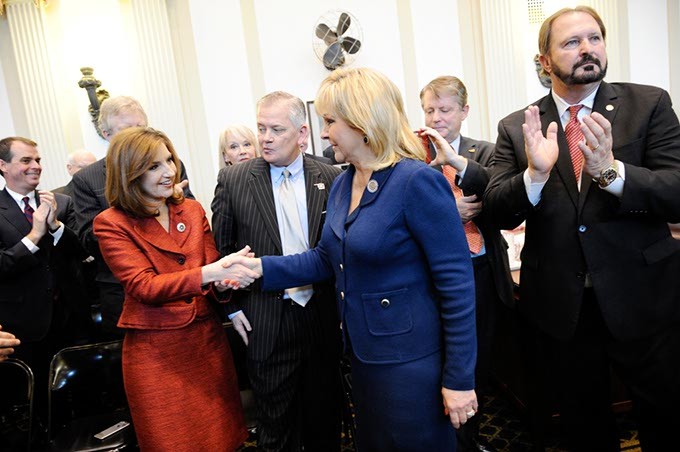 Democrats said they were pleased with the goals of Fallin’s speech, even saying it was an address that could have been delivered by a moderate Democrat. But they said they were skeptical she would support specific policies like Medicaid expansion and tamping down on tax cuts, measures the minority party has advocated for.

Rep. Emily Virgin, D-Norman, also said she found things to like in Fallin’s address, including a desire to reform the judicial system and its overcrowded prison population.

“I was really pleased to hear her talk about corrections reform,” Virgin said. “It’s economically smart. It’s $25,000 to imprison somebody for a year and $5,000 to send them to one of these [drug or mental health] courts.”

In a response to Fallin's address, House Minority Leader Scott Inman also said he was hopeful the governor would push the state forward.

“We were cautiously optimistic about what the future holds for those core functions of government that we care about,” Inman, D-Del City, said. "It was a speech that, on a whole, a middle-of-the-road Democrat could have given."

However, both Inman and Virgin said they wanted to see Fallin shift on specific policies to address the issues she raised, including Medicaid expansion through the use of federal funds.

“I like her health care goals,” Virgin said. “But we haven’t seen an effort to expand Medicaid or to accept those federal dollars, and I don’t think you can talk about expanding the health of Oklahomans without increasing access to health care and insurance.”

Sen. Ervin Yen, a newly elected Republican from Oklahoma City and the Senate’s only medical doctor, said he appreciated Fallin’s support for banning texting while driving and smoking, practices he said can help protect Oklahomans. He was also interested in her proposal for a prescription drug monitoring bill that he said could be helpful as long as it didn't overburden doctors.

“The Bureau of Narcotics know who the doctors are who are the outliers,” Yen said. “We should concentrate on going after those doctors and not try to needlessly make the good doctors go through these hoops.” 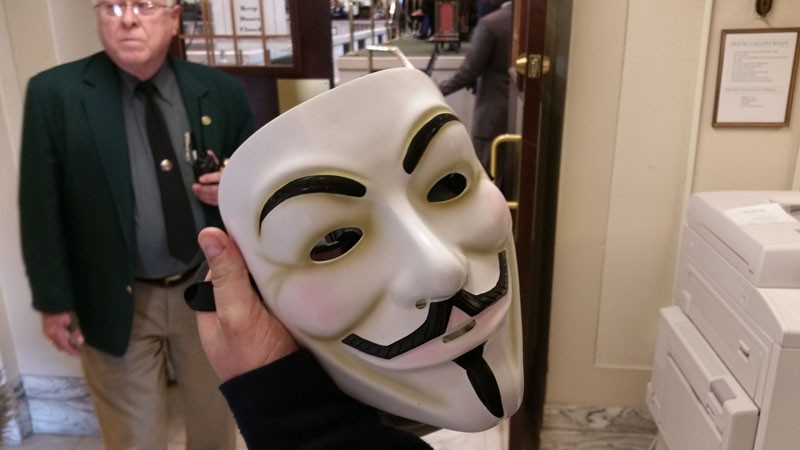 As is tradition, a full gallery was on hand to watch Fallin’s address, including two men who had brought Guy Fawkes masks to protest a bill that would outlaw concealing one’s identity with a mask or piece of clothing.

The two men were turned away from two House gallery entrances before removing their masks. Once inside the gallery, a capitol sergeant of arms escorted them out and radioed for clarification before allowing them back inside. The two men never put on their masks once inside the gallery but remained seated during the pledge and invocation and made gestures as if they were going to put their masks on in an apparent effort to antagonize the sergeant who was watching.

Near the end of Fallin’s speech, the two men were removed by a security guard.

After Fallin’s address, the House convened to discuss and vote on proposed rule changes, a process that highlighted the Democrats' extreme minority status in this deeply Republican state. Several rule changes offered by Democratic lawmakers aimed at giving minority members more power in votes and debate were voted down. Democrats enter the session with just 29 representatives (out of 101) and seven senators (out of 48).

Despite small numbers, Democrats said they wanted a seat at the table when trying to address many of the challenges Fallin raised during her State of the State.

"There are many issues that she will find support from our caucus on," Inman said. "We are eager to work with her."