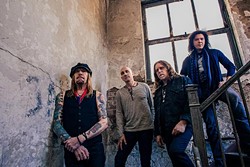 Warren Haynes is a competitive guy. You need to be, he said, to make it in this business. Haynes has done so for the past 30 years, first as a guitarist for the likes of The Allman Brothers Band and David Allan Coe and for the past 20 leading Southern-fried jam rockers Gov’t Mule.

His respect for Jimi Hendrix, The Who, The Rolling Stones, Led Zeppelin and Pink Floyd (all artists he and bandmates have covered for their annual Mule-O-Ween show with Neil Young, planned for this October) is matched only by his desire to beat them — even if it’s Mission: Impossible.

“It’s a tough choice to make, to compete with the greatest rock music ever made. But if you are going to be a rock ’n’ roll band, you have to do that,” Haynes said. “Otherwise, you can plan on a short life span.”

In all honesty, the band is more concerned with preserving that legacy of American blues and rock than actually lording over it, those lofty ambitions designed to let them land somewhere in between. Haynes is proud the Mule has carved out a niche for itself in that world and happy to have found enough like-minded fans to keep the train rolling full steam ahead for a full two decades now, a testament to the steady evolution the band has willfully allowed since day one.

“It has to start with making ourselves happy; that’s why we do a different set list every night or why we never look back at what we were doing two years ago and do that again,” Haynes said. “Once we explore something, we feel the need to never subtract from it, only add to [it].”

Shout! — Gov’t Mule’s 10th studio album — is the collision of all that, a full amalgamation of a lifetime’s worth of influences and creative vapor trails from previous, more narrowly focused efforts. It’s a big album — both in scope and presentation — with the record getting a second disc dedicated to new spins of the songs on the first by a who’s who of modern music royalty: Elvis Costello, Dr. John, Steve Winwood, Dave Matthews, Ben Harper, Jim James, Grace Potter and more.

“It added a whole new dimension to the album, and I was knocked out by what they did,” Haynes said, noting that the idea spiraled from a few guest verses to a full album’s worth of work. “It seemed like a shame to have them come all that way to just sing a verse or two. Once that decision was made, it became, ‘Why not do this for the entire record?’”

With some of their best friends along for the ride, Shout! feels like a career statement of an album, a disc’s worth of material that operates much as the band does in the midst of its 20th anniversary: Looking back at the trails they have blazed with the intention of blazing plenty more.

“Shout! is a pretty good representation of the musical paths we’ve ventured down over the past 20 years,” Haynes said. “It gives a little bit of a glimpse into each era. For us, with each record, it was very important to venture into some new territory, always a little different than the one before. Two decades later, we’ve definitely covered a lot of ground.”