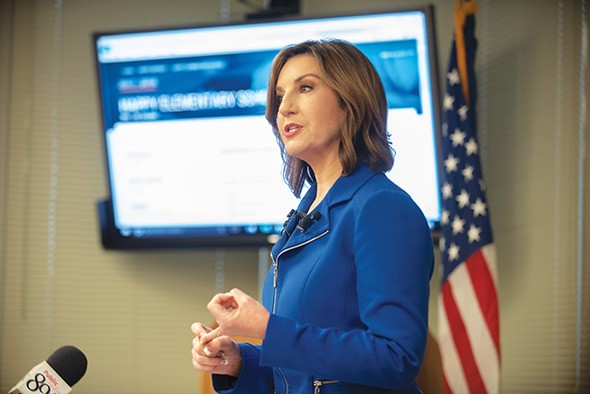 Oklahoma’s schools will have a new way to analyze their work and see how they stack up. After going without school report cards for two years, the state board of education unanimously approved a revamped system that launched Feb. 28.

Previous school report cards came on a single sheet of paper, with a large, bold letter grade at the top. The A-F grade was the main focus, offering little context. Though it did include data on student achievement and growth, state superintendent Joy Hofmeister said the system did not reflect the work schools were doing in proper context.

The new report cards still include an overall letter grade because it is required by state law, but it de-emphasizes that grade through an online interactive dashboard that offers more detail.

“We believe it’s very important to tell a more comprehensive story about the work that schools are doing,” Hofmeister said, “and be able to tell that in a way that’s more meaningful and that will give the user the kind of information that is important to them. So the dashboard is really a place where families, school leaders and community members can see important work that’s been missed in the past. So for the first time, we are measuring the growth that is occurring within individual students. This is very often underappreciated, especially in our schools that have the most challenging of learning needs.”

High schools will get up to 45 points for academic achievement; they will use the same indicators, except for academic growth, in addition to graduation (10 points) and postsecondary opportunity indicators (10 points).

To not unjustly penalize schools, they are graded only for the amount of points they can get. So schools without English-learning students, and therefore without the ELPA indicator, would be graded on a scale with 15 less points.

“[The Every Student Succeeds Act] requires that you rank-order schools based on the total number of points they earned; that’s all the indicators totaled together — all those points across indicators — to a total overall score,” Hofmeister said. “And that score then is measured from the highest score to the lowest, and the lowest 5 percent performing are federally designated as needing greater support. Those are schools that received the lowest letter grade.”

The last time school report cards were released was for the 2015-2016 school year; a little more than 200 schools received an F grade. This year, only the bottom 5 percent of schools — about 90 — will receive an F. Those schools will get federal funding to help improve their operations. The money will come from federal school support dollars, which were spread over nearly 300 schools in the past.

“We made certain that we would not over-identify because we wanted to take those funds and resources that will be given to the state of Oklahoma and not dilute that across many schools, but instead isolate those funds to go to the schools that have the greatest learning challenges at their school or greatest needs in terms of progress,” Hofmeister said.

“We will provide for them from the funds that are given to the state of Oklahoma to support this work. … They’ll have an immediate amount of money that will come as a planning grant so that they can begin to assess their schools and ... then begin to fashion a plan for how they would want to use funds in the future. And then there will be a competitive piece that will also go to about a third of those schools, which will be a large amount of money each year of a three-year designation period. That will be given through a competitive grant process.”

Hofmeister has already spoken to district superintendents of those 5 percent low-performing schools, who she said are ready to partner. Those schools will become part of a three-year cohort and can continue using funding for the three years. After three years, another cohort of schools will be identified as the lowest-performing and be eligible for federal funds.

“We want time for those plans to actually produce the kind of outcome intended,” Hofmeister said. “We are also then working with a team of support staff here that are coaches in particular areas of expertise that will be matched with those districts.”

Though the revamped school report cards offer more context and go into more detail than ever before, Hofmeister said there is always a danger for people to use the tool to “blame and shame.”

“We do not want schools to have an evaluation in a snapshot that misses the context of the work they’re doing,” she said. “We think it’s very important that we not think about them as a labeling of schools. That is something we do not support.”

Instead, Hofmeister said the new system is about providing contextual information and interactivity so schools can productively use the data.

“Schools will have capabilities that they haven’t had before to examine data in a new way, and we think that that’s always good. We want to act on evidence and make strategic decisions based on evidence. This is one piece of that.”

Stakeholders across the state provided input and ideas that helped develop the new system. The guiding belief of the new system is that “all students can grow and all schools can improve.”

“We are grateful for the work that so many people have contributed,” Hofmeister said. “We know this is also part of a continuous improvement model for ourselves, and this is the first year. There will be improvements, and we will learn from feedback that we’ve received, and we’ll be able to make adjustments and provide a greater tool in future years. So it’s the beginning, and it will, I think, become something that will be more useful with each year that comes forward.”