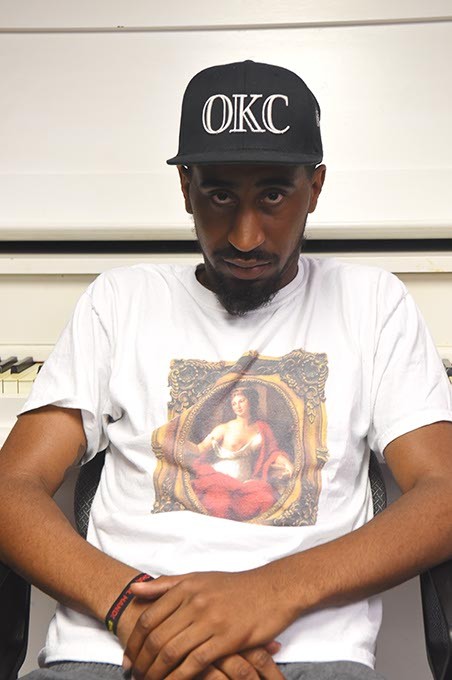 In his debut album, Grand Prix, Oklahoma City rapper Grand National tells the listener about life in the fast lane.

The 14-track project, originally released in March, is an easy ’64 Impala ride through tales of hustle and good times but also serious reflections on life and the struggles associated with establishing a career in music.

“It’s the things I’ve seen and my experiences, from the hip-hop community in Oklahoma to being out-of-state with my friends, trying to take this music to a different level,” Grand National said.

National began his musical journey in 2008. In 2009, he moved to Maryland for family reasons. Needing a change of scenery and a fresh perspective, he decided to go full-speed ahead in his musical pursuits while on the East Coast.

In 2011, he moved back to the Sooner State and released the mixtape The Chosen Few with Tulsa rapper Dial Tone in April of 2014. Grand Prix was also recorded over the course of 2014, with National wrapping up work on his first solo project in December.

Grand National, at first, did not anticipate Grand Prix to be such a comprehensive release.

“At first, I was just going to make it an EP — five tracks — and then it just kept going,” he said. “I kept recording, and it actually came out as a full LP.”

The music and production on Grand Prix is sonically smooth, reminiscent of the vibe from some of Curren$y’s music. At points — like the album’s infectious “Intro” — Grand National’s flow is similar to that of a mid-’90s Jay Z.

Though proud of his Oklahoma roots, National is constantly on the road, spreading his name and building connections. At the end of May, for example, he plans to travel to Chicago to work with producer OnGuard, who is known for contributions made to Mick Jenkins’ well-received mixtape The Waters.

“I know by me traveling and getting my music to LA and going to Chicago and meeting up with producers and doing my thing, they’re going to one day hear where I’m from,” National said.

By venturing outside and working with new people, National hopes to overcome the natural disadvantage of Oklahoma rappers in the industry: geography and the state’s lack of history in producing name-brand artists.

National said he is proud of the work he did on Grand Prix, especially considering that it was his first solo record with a lot of the footwork done himself. On the freeway to recognition, he advises aspiring artists to go headfirst into their dream.

Grand Prix can be streamed at soundcloud.com/GrandXNational. The deluxe version of the album can be purchased on iTunes.