Grapes, Grains, and the 'Gram

George's Liquors gets serious about booze

Not every small corner liquor store advertises with fake British rock stars, monkey costumes, and straight-fire raps about Dustin Hoffman’s 1974 Lenny Bruce biopic “Lenny,” but that’s only because no other liquor store has infinitely-acclaimed local filmmaker Mickey Reece handling their social media. The Instagram for George’s Liquors in OKC may be, as a certain viral Imgur post recently put it, “buck wild,” but if you’re going to be spitting rhymes in a bathtub and singing songs of praise for dorm room whiskey staple R&R to get customers into your little local booze shop, then you better have the goods to pay off that curiosity.

Fortunately, owner Cody Wilson is dedicated to making sure that the store’s selection lives up to the wacky, left-field hype.

“It’s all about just listening to the customers,” Wilson says, noting that while the personal tastes of himself and his staff are major factors, the driving

force is always just paying attention to what the market demands and what kind of interesting and unexpected items their customers seek out and request directly.

George’s has been around on Main in downtown OKC for a few decades now, but Wilson and his wife Savannah took the reins in late 2019 and, with Cody’s best buddy Reece on board, they aimed to turn the shop into the personality- driven and personally curated specialty store that they wanted to see. As a long- time employee of north Oklahoma City high-end liquor outlet The Well, and then as an industry mainstay repping for Prairie Artisan Ales, Cody has been a fixture around the Oklahoma liquor scene for years, but it wasn’t until parting ways with the repping game and seizing the opportunity to buy George’s that he got to design a store exactly the way he wanted to see it.

The key to that vision? Exclusive releases.

“We’ve done, I think, thirteen private barrels in less than two years,” Wilson beams, and that’s just him counting the exclusive whiskey bottlings. They’ve also had special, George’s-only beer releases in collaboration with some of the biggest local brewers, and loads of unique and sometimes wild wine offerings, all personally selected for the shelves by Wilson and his staff.

So just what kind of serious goodies does George’s have behind all that wild, weirdo comedy? Let’s take a look, shall we?

LOADS of Private Barrel Whiskies:
Wilson takes an enormous amount of pride in George’s selection of specially- bottled whiskies, most of which are shared with his old friends at The Well. These include a brand new release from Barrell Bourbon (this one is a full nine years old and is a whopping, flavorful heat bomb at over 126 proof,) a barrel- pick from Kaiyō (the first ever Japanese barrel-pick in Oklahoma) and, possibly most unique of all, an exclusive bottling from Del Bac, an all-American single malt (distilled the Scottish way, from 100% malted barley, but smoked with pure, American mesquite, resulting in some chocolatey, smoky goodness.)

Lots of Love for Local Beers:
It’s no secret that Wilson is one of the Okie beer industry’s biggest cheerlead- ers, and he’s gone out of his way to curate a selection that rivals any other in the state. “My personal favorite beers are generally the rotating options from Heirloom, American Solera, Stonecloud, and Big Friendly,” Cody says, resisting all efforts to narrow his favorites any further. “Collaborations with local breweries are important to us. We had a collab with Prairie release earlier this year and one with American Solera re- leasing for Father’s Day.” Of course, being just around the corner from Stonecloud also puts them in great standing with one of the state’s leaders for the creamy, rich Double IPAs and boozy-sweet, barrel-aged Stouts that Oklahoma beer geeks flip over. “We sell a lot of Stonecloud,” Wilson confirms. “They don’t open until 3pm, and people get thirsty before then.” 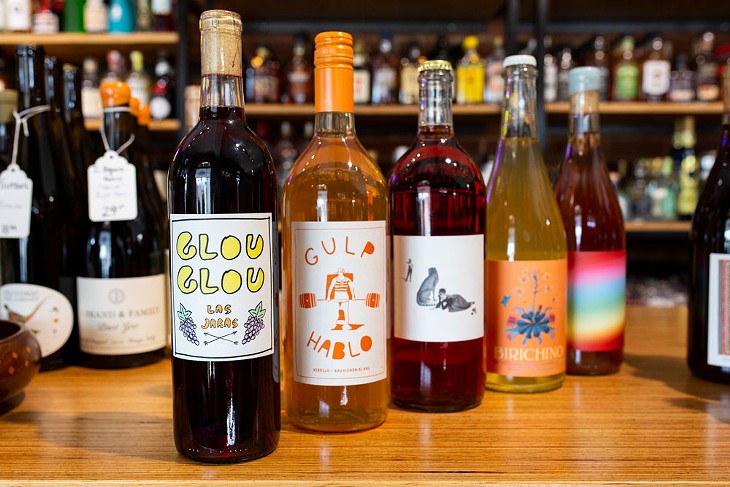 Summer Wines for Summer Times:
Right inside the door you’ll find a perfectly-placed selection of refreshing, summery wines, mostly rosés and the relentlessly trendy “orange wines” (white wines that have been crushed and fermented with their skins intact, resulting in often drier, nuttier, and spicier flavors.) Cody’s favorite chill- able summer wine, however, is the much more adventurous pet nat, or “pétillant naturel,” a potentially ancient style of sparkling wine made by dropping active yeast right into the bottle, making for a crisp, funky wine perfect for any fan of sour beers. “Pet Nats were easy to love coming from a beer background,” he raves. “They’re so damn funky and delicious.”

This is all just scratching the surface, of course, and Cody reassures us that more is one the way. He plans to con- tinue expanding the store’s extensive selections of Mezcals, Japanese whis- kies, and cocktail mixers and liqueurs (he says that during the pandemic, customers relished the chance to make creative cocktails at home), all with the help of the local, independent distributors with which he works so closely.

And are there any more exclusives on the horizon? Well, George’s preparing for an offering from one of the world’s most beloved bourbon distillers who it turns out has a serious sense of humor.

“We got invited out to Louisville to pick a Buffalo Trace barrel solely because of our Instagram content.”

You too can keep up with all of the George’s gang’s shenanigans here.