The Grapes of Wrath celebrates its 75th anniversary this year, and its stories of humanity are as timely as ever.

Published in April 1939 and winner of the Pulitzer Prize for fiction in 1940, The Grapes of Wrath continues to resonate today. Its popularity rose quickly; The New York Times recently noted that in 1939, “it brought (John) Steinbeck’s publisher, Viking (Press), more advance sales than any other book to that point in the company’s history.”

The writing approach alone is genius. Steinbeck created a new method of fiction writing using contrapuntal style. He alternated odd- numbered chapters of background about the tenacious lives of migrants with even-numbered narrative chapters depicting the Joad family’s arduous migration to California. Chapter 15 is the lonely, pivotal chapter that uses both narrative and editorial styles. The title, suggested by Steinbeck’s wife, Carol, was culled from the Civil War-Era song “The Battle Hymn of the Republic.” “When first published, it carried both the verses of Julia Ward Howe and the sheet music on the endpapers in order to fend off accusations of unpatriotic Marxism. But really it succeeded because it contrived to pick up the strain of what Wordsworth called ‘the still, sad music of humanity,’” Christopher Hitchens wrote of The Grapes of Wrath in his book Love, Poverty, and War: Journeys and Essays.

Conflict and discussion A depiction of the social, economic and climatic conditions during the Great Depression and Dust Bowl era needed to be shouted from the rooftops. It was a condemnation of the country being destroyed by natural disaster, poor land-use practices and technological arrogance. But it was also a story about survival and tenacity. Not always a welcome story, it was banned from some libraries in Oklahoma and elsewhere in the country, including Kern County, California, the endpoint of the Joad family’s trek. It also was burned in California, among other places. The Oklahoma Legislature denied a request to invite Steinbeck to the state for its semicentennial exposition in 1957, said Larry O’Dell, director of special projects/development of the Oklahoma History Center. In an updated interview transcript on file at the Oklahoma History Center, a reporter asked Steinbeck about being essentially voted out ofOklahoma: “A lot of them [voters] seem to feel that you wrote The Grapes of Wrath deliberately to embarrass Oklahoma in some way. Could you comment on that?” The author replied, “I should think that quite the opposite is true. In truth, it was because an act of God had happened. People were in deep trouble. They were wonderful people. I lived with them and I admired them very much ... I don’t know why the charge has been against me that I have spoken against Oklahoma. I haven’t. I’ve spoken against dust. I’ve spoken against poverty. But never against Oklahoma!”

Okies and human worth During those years, the word “Okie” was commonly used as a slur against poverty-stricken migrants who made the trek from this state to California. Popularized by Steinbeck’s novel, the word’s meaning expanded to mean, essentially, “white trash,” regardless of where the person was from, O’Dell said. Today, it has morphed to take on a note of pride with many in our state. But the Okie experience isn’t relegated to the past. “In terms of relevance, The Grapes of Wrath is worth reconsidering. It was written when the government felt it was time to intervene on the behalf of people’s needs,” said David Wrobel, a University of Oklahoma history professor. Steinbeck predicted some people would try to give the book a Communist angle. He took the title from a patriotic song that kids sang in school and tried to craft a truly American book designed to help and instruct people. “Steinbeck was motivated by a concern for humanity. This is illustrated in the story’s ending. For me, it’s one of the great endings in American literature,” Wrobel said. “During the Great Depression, we saw efforts to make life more manageable as the New Deal government interceded. After The Grapes of Wrath was published, Steinbeck was attacked by agribusiness, with claims that the conditions depicted didn’t exist,” he said. Upon its release, the Associated Farmers of California dismissed the book as a “pack of lies.” “But actually, the reality was that conditions were worse than portrayed in the novel,” Wrobel said. Blaming part of the environmental devastation and economic destitution on the increased use of the tractor, Steinbeck also noted that this use also led to the evictions of tenant farmers. “The tenant system won’t work anymore. One man on a tractor can take the place of twelve or fourteen families,” Steinbeck wrote in the novel. 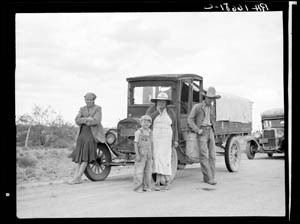 AT THE OKLAHOMA HISTORY CENTER See a film poster, a car from the era and more Great Depression and Dust Bowl artifacts at the Oklahoma History Center. Oklahoma Writers: A Literary Tableau, an exhibit that includes details about John Steinbeck, the Mother Road and more, is now on display. The history center, along with Oklahoma City University and local professional theater groups, will stage a production of The Grapes of Wrath play, according to Larry O’Dell, director of special projects/ development of the Oklahoma History Center. Details and dates will be announced later this year.

DID YOU KNOW? — The Grapes of Wrath was first published on April 14, 1939. — In the book, Steinbeck coins the nickname for historic Route 66: Mother Road. It winds through Oklahoma and our country. Its midpoint in Oklahoma carried many Okies from the Dust Bowl into California during the Great Depression in the 1930s. — The historical fiction novel took Steinbeck five months to write, from May to October 1938 in Los Gatos, California. — It won the National Book Award and the Pulitzer Prize for fiction. — The term “Okie,” which commonly was used as a derogatory term to describe poor migrants, became well-known after Steinbeck’s usage to describe destitute Oklahoma travelers during the Great Depression and Dust Bowl era. — In 2010, the book was named one of the “Top 100 English- language novels of all time” by Time magazine. — The work was cited as a reason for author John Steinbeck winning the Nobel Prize in 1962. — A mint-condition version of the first edition is valued at $25,000. — In 1940, the book was made into a move starring Henry Fonda. In 1989, the movie was chosen for preservation by the United States National Film Registry by the Library of Congress. It called the film “culturally, historically, or aesthetically significant.” — By 1940, more than 400,000 copies of the book had been printed. — Since its release, more than 14 million copies of the book have been sold. Sources: Oklahoma History Center, Pulitzer. org, National Endowment for the Arts, Time, The Telegraph

Speaking of Dustbowl, grapes Of Wrath