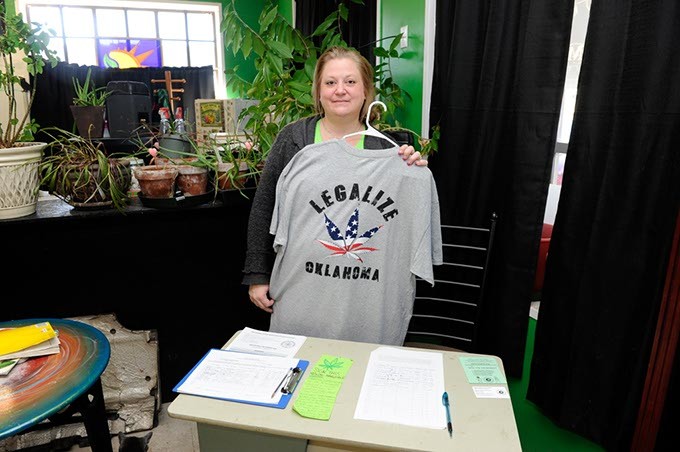 Beth Corcoran spent her fall visiting the Paseo and the Plaza districts. She talked with students on the campuses of the University of Central Oklahoma and Seminole State College.

She also dropped by Chesapeake Energy Arena on nights the Oklahoma City Thunder played, but Corcoran didn’t go for the game.

Her schedule revolved around community events and the opportunity to interact with residents, especially those registered to vote. Driven by compassion and a desire to treat her severe insomnia with medical cannabis, Corcoran collects signatures in hopes that voters can decide the fate of medical marijuana in 2016.

“Most people are very nice,” she said. “They will ask to sign, share their experience and why they want it legalized. Most people want to help.”

Corcoran is a member of Green the Vote, a statewide grassroots organization pushing to legalize medical marijuana through a petition effort to bring a state question before voters. Founded this year, it preaches medical marijuana can make a positive impact on a patient’s outcome. Its claims are supported by research and studies, which show medical marijuana helps patients suffering from a multitude of illnesses.

As of Dec. 2, around 43,000 Oklahomans pledged support for legalization, according to Isaac Caviness, president of Green the Vote. The movement needs 123,724 signatures by Dec. 29 for a state question to appear on the November ballot. The volunteer-based group is not worried but is eager, as only half of the petitions are in at the Haskell headquarters. Caviness suspected the volunteers have collected 80,000 to 90,000 Oklahomans signatures as of early December.

“We are doing something that is going to be great for the state, and it is a human rights issue. We have people in this state dying from illness that medical marijuana can help,” Caviness said. “This is an issue people should be proud to support.”

While Green the Vote finds support, volunteers share encounters with voters against the effort and others who express fear of signing the petition.

State Question 778 calls for amending an article to the Oklahoma Constitution with classifying marijuana as an herbal drug regulated by the Oklahoma Department of Health. The drug would be taxed at 7 percent with proceeds first going to pay for regulations. Excess tax funds would benefit the Oklahoma State Department of Education’s general fund at 75 percent, and drug and alcohol rehabilitation programs would receive 25 percent.

The proposed law would allow for municipalities to levy additional taxes to build and repair roads. Additionally, industrial hemp would become legal for possession, growing and selling.

With colder weather and fewer outdoor events, the group is now pushing for supporters to come to them. On the group’s website, greenthevoteok.com, there is a list and map of more than 150 businesses hosting the petition.

“Our goal is to drive people to the website, where they can find the closest location for signing,” Caviness said. “We have plenty of people who want to sign. We just need to get them there.”

Print Headline: Final push, Green the Vote wants to appear on a state ballot but needs voters’ support now for that to happen.