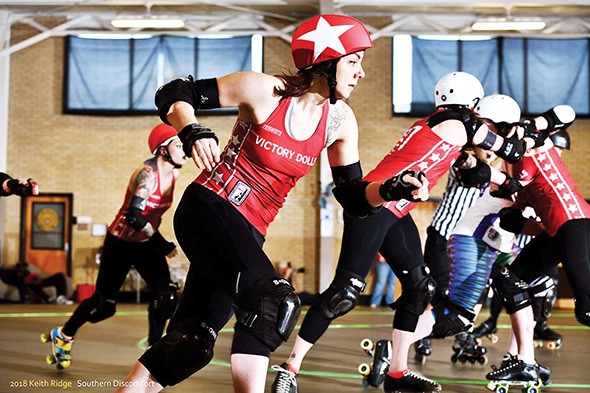 “After, like, day two, I was like, ‘Fuck this shit,’” said Riggs, head of the public relations committee for Oklahoma Victory Dolls Roller Derby. “I was like, ‘I’m done. I am never going to be able to skate like those girls over there. Whatever they’re doing is magic. They sold their souls to Satan. I can’t even stop. I can’t turn around. I can’t stop. I can’t go. I’m just standing here.’”

The Outlaws face the Lightning Broads in the 2019 Oklahoma Victory Dolls Roller Derby championship Sunday at Star Skate, 2020 W. Lindsey St., in Norman. Riggs, who started competing in January 2016, said she continued to skate despite her initial difficulties thanks to a “very encouraging new recruit coach” who kept her motivated until she started enjoying it.

“Once you do learn how to do a few things and you actually have fun executing those things or you do it well, it’s encouraging,” Riggs said. “And a lot of the other skaters, really all of them, went through the same thing. Hardly any of us came to the sport knowing how to skate — very, very few. So every person who’s there, no matter how good they are, started the same way you are, which is stumbling around like Bambi on ice and just not having any control over your body at all, so you get a lot of encouragement from the other skaters and a lot of help. And that, I think, is what keeps you going until you’re able to do things well enough to actually have fun at it.”

"You can hit as hard as you want, but there’s legal ways to do that because we’re not trying to intentionally hurt each other."
— Cheyenne Riggs tweet this

Dating back to the 1930s, roller derby pits two teams of five skaters against each other on a circular track. Each team has a jammer, designated by the star on their helmet, who attempts to lap the competing team in order to score. The other four team members are blockers.

“The main person to watch is the jammer,” Riggs said. “They’re the one scoring points. It’s often confusing to people at first because there’s no ball and most sports have some sort of ball or puck or thing you are moving from place to place. That’s what sports do, and so the easiest way to think of it is the jammer is the ball, and the jammer is trying to get around the track, and the blockers are trying to help their jammer and stop the other jammer. … Most of the strategy comes with the blockers, but it’s harder to keep track of.”

The championship will be the last home game this season. In 2019, the Outlaws and Lightning Broads faced off four times, and each team won twice, Riggs said, making the game a tie-breaker as well as a championship. Though the Victory Dolls are divided into two teams for local competition, the skaters are reorganized into the All Star Squad and Tornado Alley, comparable to a high school’s junior varsity, when they compete with out-of-town teams.

Riggs, an instructor at University of Oklahoma, skates for the Outlaws and Tornado Alley under the name Professor Flex. Skating under a pseudonym is a tradition that dates back to “the old days” when roller derby was similar to professional wrestling, with scripted storylines and even fixed outcomes. While the theatricality of an old-school bout originally drew Riggs to the sport, she said she continued to compete because of the athleticism and teamwork required in new-school roller derby.

“For me, personally, I think what drew me and what kept me around are very different,” Riggs said. “I saw a bout in Austin that was much more of the old style, with the theatrics and stage makeup and tutus and fishnets and stuff, and I’d always done theater as a kid and liked to perform. And I kind of saw it as more of a performance, you know? Hang out with some friends and put on a show and whatever, whatever. I didn’t end up doing it then. I was too busy. But when I moved to Oklahoma in 2015, I looked into it again and joined the league kind of thinking that that would be the style of roller derby I would be playing — the banked track with the crazy costumes and this and that and basically having a persona when you’re out there, and that’s not what I ended up joining. 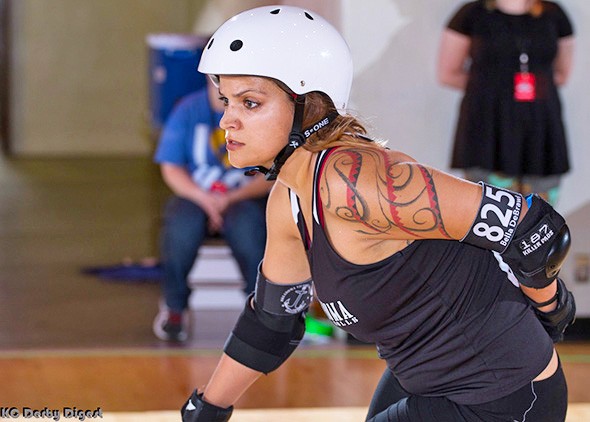 “I didn’t really realize that initially, so I think what kept me around was the fact that it wasn’t like that. It’s the fact that it is much more serious and athletic, and there’s training schedules and tournament preparation and strategy talk. It’s a sport for adults who aren’t able to play a professional sport, people that played sports in high school or college and wanted to continue the team aspect and the training aspect and the competition aspects but want to do it at a higher level than a recreational sport like adult softball or adult kickball or something.”

More than three years in, Riggs said she has put in close to the average time for an amateur roller derby career.

“People’s lives change,” Riggs said. “They get married; they move away; they get pregnant. It’s a team full of women, so you get pregnancies all the time, or fairly often anyway. Some injuries, people come back from; some they don’t. Some people retire because their bodies are just over it. We had a skater recently retire. She was the longest running member of the team, and she’d been skating for 10 years. That’s very unusual. I would say the shelf life is probably three to five years. … It might be a little different if it was the kind of sport you start playing as a kid, but most people don’t start skating until they’re an adult. It’s just a little harder to teach your body to do something when your body’s already approaching 30 or past 30. It’s possible, but the injury rate goes up.”

Depending on their commitment level, skaters meet for practice multiple times a week. They also discuss strategies and view game films before facing out-of-town opposition. Riggs said the most common misconception about roller derby is that the bouts are basically mindless violence.

“You can hit very hard in derby,” Riggs said. “You can hit as hard as you want, but there’s legal ways to do that because we’re not trying to intentionally hurt each other. I think that’s part of it. There’s a difference between tackling somebody and stomping on their head. There’s a difference between hitting somebody with your hip and, like, smashing backwards into their face or whatever. There’s a big difference. … That’s, like, the main question: ‘Oh you play derby? Do you elbow girls in the face?’ I’m like, ‘No. Nobody would want to play that sport if you got elbowed in the face every day.’”

The championship bout will be followed by an open gender mashup for derby skaters from any league. Bring your own chair.