American Cancer Society takes to the streets for its Run for Hope. 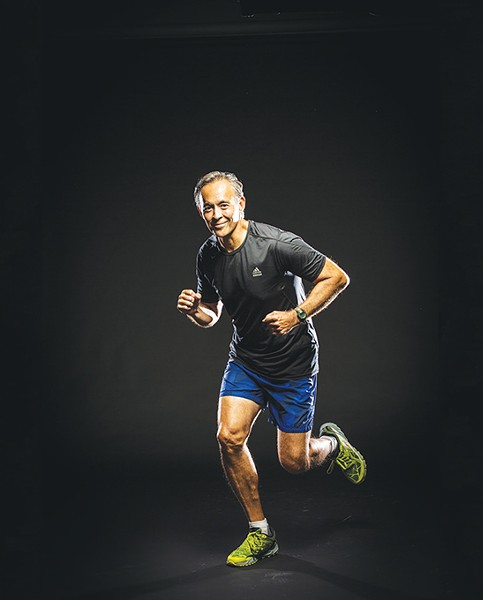 James Bost loves running. He approaches this pastime, and life in general, with an enthusiasm that bubbles over in conversation. His energy is infectious, and his optimism is inspiring.

Bost is a pancreatic cancer survivor. He was diagnosed over six years ago and treated at Stephenson Cancer Center, which is part of University of Oklahoma Health Sciences Center in Oklahoma City.

Since his diagnosis and recovery, he has run nine marathons. He admitted he wasn’t even a serious marathoner before his life-changing experience with cancer.

“So many people impacted by cancer, they don’t get to run again,” Bost said. “I was very surprised that I did have a full recovery from pancreatic cancer. And I can run. And that’s kind of a reason to run in itself, you know? It’s a celebration every day to be able to run.”

He credited his doctors, including his primary care physician Dr. Yen Dung (Titi) Nguyen at SSM Health Medical Group and surgeon Dr. Russell Postier at Stephenson Cancer Center, with being instrumental in his care and recovery.

Under Postier’s care, Bost underwent a 10-hour surgery known as a “Whipple procedure” or pancreaticoduodenectomy, during which his gallbladder, bile duct and portions of his pancreas and small intestine were removed. It is a risky procedure and can require a long recovery period, but Bost said he was out of the hospital in five days.

Bost insisted he’s not unique and didn’t do anything special beyond seeking the best care he could, which he was pleased to find in OKC.

He pointed out that on May 2, Stephenson Cancer Center was named a National Cancer Institute Cancer Center, a designation that places the facility in the top 2 percent of cancer treatment centers in the U.S.

Bost is now on the board of advocates at Stephenson, and he continues campaigning for cancer awareness in additional ways. He often speaks to others about his experiences whenever he’s recognized in public.

“I think that’s why we actually go through difficult circumstances,” Bost said. “It’s so that we can develop empathy and be of service to others when they have hard times as well. That’s the point, I think.”

He said around a year ago, he was speaking to Lesa Foster, the executive director of American Cancer Society (ACS) in Oklahoma, when he brought up the possibility of having a fundraising run.

“Really, everyone knows someone with cancer,” Bost said. “Everyone is affected by cancer in one way or another, or will be. So I just thought maybe there’s a way to create awareness and really celebrate people or their lives, just through having a running race. That’s really how Run for Hope started.”

Alicia Jackson, community development manager at ACS, explained that the organization once held an annual 12-hour Relay for Hope, but after Bost’s brainstorming session, they decided to reformat and shorten the event, developing Oklahoma’s first Run for Hope instead.

The event is Aug. 25 at OU Health Sciences campus. Day-of registration begins at 6:30 a.m. The races include a 5K, a 10K and a fun run, which start at 8 a.m. near the Robert M. Bird Health Sciences Library. The route is a certified USA Track & Field course, and 500 runners are expected. Race participants are encouraged to wear colors representing the various types of cancer.

Cancer survivors and children may attend the event free, but if participants would like the Run for Hope shirt and medal, they will need to complete registration.

Jackson said there will be a pavilion where people can gather at the intramural fields, roughly a block south of the race starting line. ACS will provide a DJ, music, food, a photo booth and games. A special area will be designated for cancer survivors to meet.

The run’s registration fee of $35 goes toward ACS fundraising goals, but participants can also form fundraising teams and contribute additional donations through the end of the year.

Jackson said any funds raised during Run for Hope go directly toward research for all types of cancers. Fundraised money will also support the many free services ACS offers to local cancer patients.

For instance, the Road to Recovery program provides patients with free rides to and from cancer-related medical appointments. The Hotel Partners Program works with area hotels to provide weekday accommodations for patients seeking treatments. ACS is also planning to open a Hope Lodge in OKC within the next few years, which will offer full-time family-style housing for cancer patients.

Jackson said that although serious runners like Bost will be in attendance, all fitness levels are welcome at the event.

Bost is running the 10K wearing purple, which represents pancreatic cancer. He expressed excitement for the race.

“I think any day running around is a good day,” Bost said.

Runners can register for the event or donate to ACS at runforhopeokc.org. Anyone with questions about cancer or ACS may contact its 24-hour hotline at 800-227-2345.