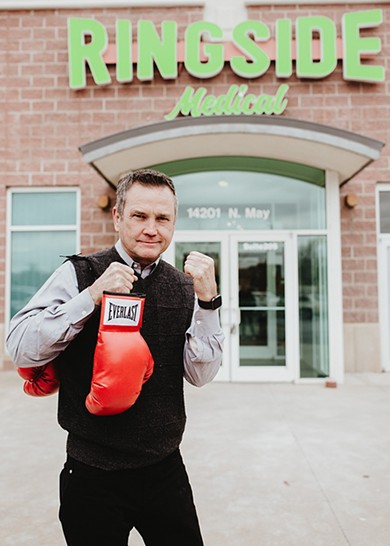 Sean O’Grady hung up his boxing gloves 35 years ago but has lived with the pain of his glory days for decades.

The former lightweight champion of the world began his professional fighting career when he was 15 years old. He ended it nine years later with 86 wins, 70 of them by knockout.

“There are 14 bones in a hand, and I feel like I feel every one of them,” Sean O’Grady said.

The O’Grady family earned its bread with boxing, and Sean O’Grady was fighting every few weeks to keep his family fed.

The injuries came early. First, he broke the little finger on his left hand. He shied away from using that fist, turning his striking hand to avoid another direct impact, but broke his left thumb. Then he broke his right hand.

“We were so poor, we couldn’t go to the doctor to ascertain that it was actually a break. But actually, I broke a bone. But I went [to bed] every night with that broken hand, and I’d cry myself to sleep,” Sean O’Grady said. “That was our life and our family. We needed to have a stream of income, so that’s just what it was.”

Over the years, he tried steroids, opiates and a myriad of home remedies, but it wasn’t until his mid-50s that he first tried cannabis at his son’s insistence.

“When I was a boxer, my hands hurt all the time. Well, they still hurt today. They never stopped hurting. And in this agonizing complaint from me time after time, day after day, Chase started really pounding on me about the efficacy of CBD,” Sean O’Grady said. “I used the CBD stuff, and it was pretty good. It would last me a couple of days, and you know, it made the pain go away. I could run a little bit, not like I used to, but in my walks, I could run a maybe a mile of the walk and it lasted about a day and a half and then it went away. Well, then I tried the THC medicine. That stuff lasted me a week, maybe 10 days,” he said. “I’ve got it on my hands right now. I use it on my feet.”

Sean O’Grady flirted with cannabis in his youth at parties and concerts, but it never stuck.

“It wasn’t appealing to me,” he said. “First of all, I don’t smoke. I don’t like the taste. Smoking gets my throat all choked up and congested. Smoking is really not my thing, but most recently, my son has gotten me into some tinctures and some edibles that are quite nice and some pills. ... The best thing though is the rubs. The rub I put on my feet this morning, and I’ve constantly been rubbing my hands with this THC stuff all day today. So it just helps so much in alleviating the pain of my feet and the pain of my hands.”

“With this new business that is available here in Oklahoma, it just meant so many different opportunities for people to learn about cannabis and the benefits of cannabis,” Sean O’Grady said. “Whenever I talk to somebody about this subject, I always make sure to tell them, ‘Look, just do your best to try to understand more about the cannabis. We’ve all been brainwashed that it’s not good for you.’ I’ve found it is very good. It’s great for you.”

The storefront will include all manner of cannabis and hemp products, and Sean O’Grady said he has tried most of them except for the flower.

Besides acetaminophen in the morning and at night, cannabis products are the only ones he uses for the pain these days. He quit taking opiates for pain in his 30s.

“I would take them during the prescription time, then I wouldn’t continue after that, but I can see where people become addicted,” he said.

He thinks cannabis would revolutionize the lives of war veterans and their families. It might have changed the course of his own family.

Pat O’Grady — who went on to become a legendary boxing trainer — fought at Guadalcanal, Iwo Jima, Peleliu and Okinawa.

“My father suffered from PTSD. Me and my two sisters had to deal with that growing up here in Oklahoma City. ... They diagnosed it as shell shock, and they prescribed him barbiturates — Tuinals and Seconals — as many as he wants, as often as he wants. Well, he finally succumbed to the Tuinals when he died at 60 years old,” Sean O’Grady said. “My father, the only way he got relief from his anxiety and his PTSD was from barbiturates. And I really wish he were on something other than that. My father would have been so much better off. He’d still be alive. It was always his conjecture that it should not be illegal and it would help a lot of people. Whenever my father said that, my first thoughts were, ‘Dad, it would help you.’”

Ringside will be offering veteran discounts, but the percentage has not yet been decided.

“I have a special place in my heart for anybody who served this country,” Sean O’Grady said.

His son Chase will help run the family business, a 3,000 square-foot storefront that will boast a 110-inch television screen that will play both boxing and cannabis content. A 30-minute documentary about Sean O’Grady’s life is also in the works.

“Sean was very pro-advocacy for cannabis and the medical uses for it, so I think we just kind of fell right into it and realized that this is a path that we should try to take,” Chase O’Grady said. “And then we knew that we wanted to focus more on the athletic and more of the kind of muscle recovery, muscle relief avenue. CBD was very active here in Oklahoma. And he kind of took my suggestion actually pretty open-heartedly because he used a lot of natural remedies when he was boxing, tinctures and topicals that his family made in order to help him to do some pain relief, so it was a very easy adaption for him.

“He knew that going along with THC would help. And he visited a few states that it was rec-approved and went and tried it there and realized that it was really helping him, and he would go on a whole trip and just rub that topical on one time, and it lasted the whole trip.”

Even though his father doesn’t smoke cannabis, Chase O’Grady hopes to develop a strain in his father’s honor. His father’s fighting moniker was The Green Machine.

“There’s a strain that’s called Blue Machine,” Chase O’Grady said. “I would love to cross it with Green Crack. So I think that’s something that I would really like to rally around and get behind. Coming up with a strain that’s an Oklahoma-based strain, I think, could be very positive for the state.”

Before he was The Green Machine, he was also known as The Bubblegum Bomber because he would walk into the ring chewing bubble gum to give a carefree appearance and also calm him down before a fight, so Chase O’Grady said they are exploring a cannabis-infused gum with the same name.

Even three and a half decades after his fighting career, Sean O’Grady still has quite a reputation and cult following in Oklahoma City.

“All the vendors have all been used by us, and we feel confident about bringing them into the store, and there’s no vendors we’re using that have not been lab-tested,” Chase O’Grady said. “We love that people have that amount of confidence in him, in his judgment. We will do everything on our side to meet that.”