Even if Green Room did not take a sharp turn into unvarnished, visceral terror, its bleakly realistic view of a punk band’s life in a van would qualify as horror. Put those musicians in the backwoods of the Pacific Northwest and surround them with a small army of Aryan Nation skins and it becomes a pitch-black nightmare.

The Ain’t Rights, a D.C.-based punk group on a grimy, long-haul tour of small clubs, find themselves running on fumes on the last leg of the journey and siphoning gas when those fumes run out. When a Seattle gig turns out to be barely worth beer money, the hapless fan who organized the date comes up with a desperate antidote to the band’s cash-flow issue: a performance at a rural Oregon outpost crawling with Nazi punks.

Bassist Pat (Anton Yelchin), singer Tiger (Callum Turner), guitarist Sam (Alia Shawkat) and drummer Reece (Joe Cole) are smart kids with liberal arts values, but money being money, they take the gig and almost immediately regret it. After tweaking the skins with an ill-conceived classic cover and finishing the set, they retreat to the green room, where musicians usually go to relax after a gig, to find their situation going south at light speed.

The balance of Green Room feels like Deliverance with double-time drums instead of banjos, and the man giving orders, Darcy Banker (Patrick Stewart), wields his influence like a machete. In an effort to take care of their own, the skins will do what it takes to erase The Ain’t Rights. 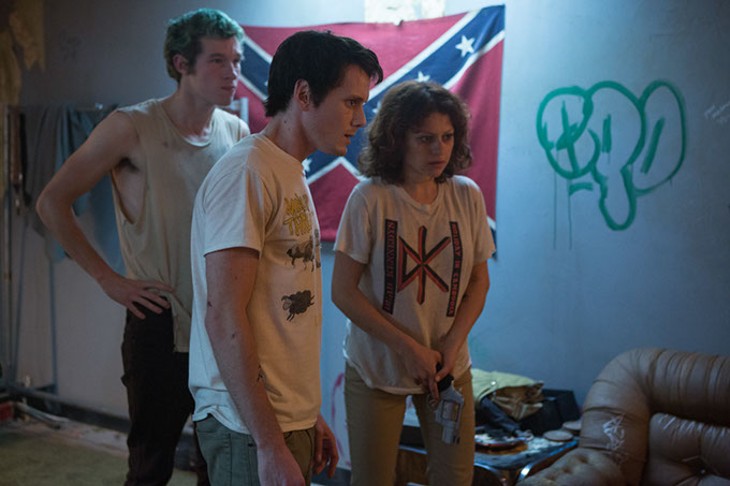 Much of Green Room’s success comes from simply nailing all points in the culture, from the earnest stage snarling of The Ain’t Rights to the mad barking of the skinhead bands that share the bill. But the film’s greatest dramatic masterstroke comes from the naturalistic performances, especially from Yelchin and Shawkat on the side of good and Stewart on the side of evil. 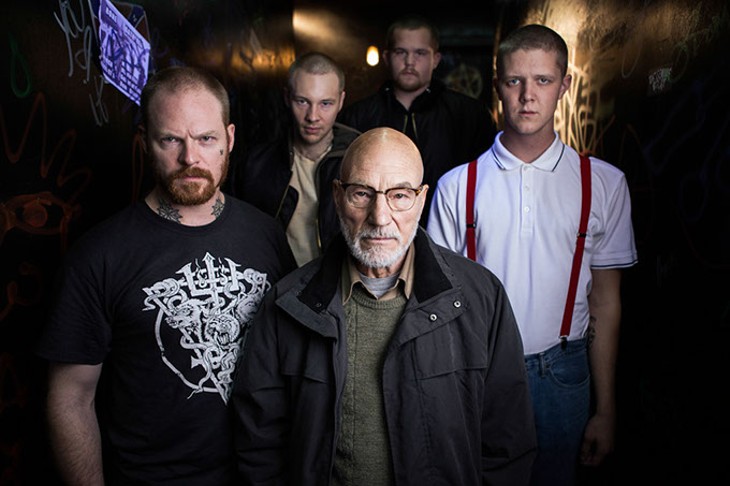 Banker speaks directly and authoritatively, only raising his voice when he needs to be heard, and lies with impunity. He looks professorial, but the cauldron of hate roiling within him is his energy source. Stewart established his bona fides by mostly playing heroic and altruistic figures, but in Green Room, he shows his capacity for exuding menace. Imogen Poots also stands out as Amber, a wild card skin whose presence at the inciting murder proves pivotal in the film’s outcome.

Written and directed by Jeremy Saulnier (Blue Ruin), Green Room gets horribly bloody in short order and continues its wave of mutilation to the bitter, bitter end. Yet the ultraviolence feels entirely earned by the situation and the actions of the antagonists. It never feels overindulgent, and Saulnier avoids easy scares and opts for extended, grinding tension as his weapon of choice.

It’s easy to see Green Room as a political allegory at a time when the extreme ends of the body politic seem ready to carve one another up, but in the end, this is a classic story of prisoners fighting their way out.