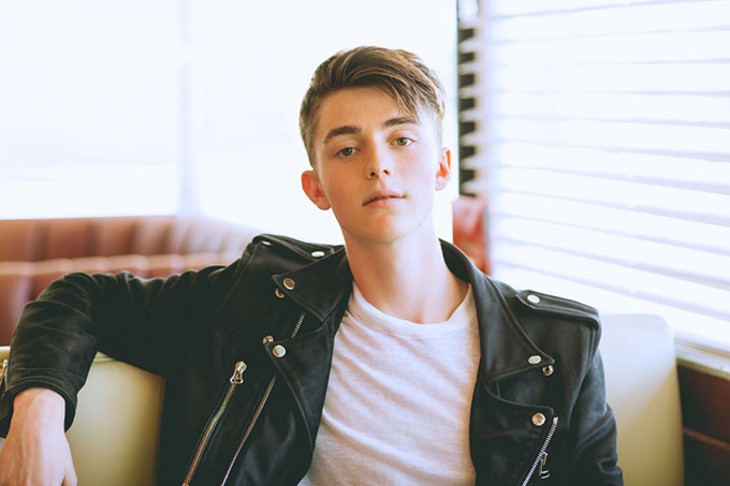 Greyson Chance crashed onto televisions and streaming video outlets in 2010 after an amateur YouTube video went viral and earned him an appearance on The Ellen DeGeneres Show. The clip showed him playing piano and belting out an impressive rendition of Lady Gaga’s hit “Paparazzi” during a sixth-grade school show in Edmond. Now, 18-year-old Chance exists in a world of late-night calls, cigarettes, alcohol and complicated relationships. He released his second EP, Somewhere Over My Head, May 13.

Opening track “Afterlife” is a definitive summer jam. Verses burn slow while still feeling driven, and the chorus bursts in as a sun-soaked, hazy anthem backed by electronic dance beats, the perfect soundtrack for long drives with the windows down.

“Back on the Wall” features Chance’s signature falsetto, but it is more grown up. The incandescent electro-pop dance beats of “Afterlife” brighten this track, accompanied by soulful vocals reminiscent of Justin Timberlake in his Future Sex/Love Sounds heyday. “Back on the Wall” contains the confidence of a performer who sells out stadiums and makes fans swoon.

The EP’s third track, “Hit & Run” wouldn’t sound out of place in any Saturday night club mix. It’s a carefree banger that touches on an emotionally distant lifestyle that’s reincarnated, reinvented and fused into the youth of every generation.

However, the fourth track, “No Fear,” is Somewhere Over My Head’s cleanest, most radio-ready track and represents the flipside of “Hit & Run.” It’s a smooth number filled with the bravado of youth and young love, a perfect sample of Chance’s developing maturity as a performer and as a young man. His voice flows over bright tones and subtle drums as he promises a drama-free relationship. And he upholds that promise to his audience throughout this EP.

Two days before Somewhere Over My Head’s release, the Oklahoma-raised musician told Teen Vogue the song represented a different version of himself.

“I’m a skinny, geeky kid, but this record, to me, kind of feels badass and kind of feels cool, and I think it’s a cooler version of myself,” he told the magazine.

Rather than projecting a fresh, edgy “persona,” this project showcases how he has grown personally and professionally and shows promise for how he’ll continue to develop as his career progresses.

The EP ends with “More Than Me,” a dark ballad about lost love and unmet expectations. Its lyrics — opening with “I lost my way on streets that I paved” and closing with “You weren’t looking at me; you were looking instead somewhere over my head” — could tell the story of an unsuccessful love affair as well as it could the ups and downs of fame.

Though this project shows inspirations possibly borrowed from Timberlake’s swagger, British singer Maverick Sabre’s soulful vocal stylings and the pop sensibilities and sweet-faced, boy-next-door appeal of South Africa’s Troye Sivan, Chance makes a name for himself and does a pretty good job of not pretending to be anyone else.

He might have started out as a prepubescent internet sensation, but Somewhere Over My Head features a more seasoned performer taking hold of a more secure, earned place in the spotlight.