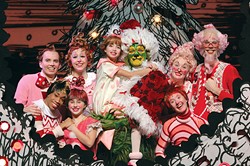 Although he’s the only green character in How the Grinch Stole Christmas! The Musical, now playing at Civic Center Music Hall, Icelandic actor Stefan Karl isn’t one to shy away from “carving roast beast” every night with Cindy Lou and his other Whoville buddies.

In fact, he has done it nearly 450 times during the holiday season for the last seven years. Karl said he’s excited to be performing in Oklahoma for the first time.

“It’s the perfect family entertainment, and everyone will enjoy it just the same,” Karl said. “That’s the beauty of it. You stand up there on stage and you see generations together at the theater. There are not a lot of productions that come through town for the whole family where they can go together.”

Karl said the musical stays true to Dr. Seuss’ book and was approved by the beloved author before he passed away in 1991. Even the holiday-loving Whos stay true to the original cartoon’s colors of pink, red, black and white in costumes and sets.

Growing up in Iceland, Karl’s childhood Christmas celebrations were quirkily different. In the Viking “land of ice and fire,” he said, Iceland’s Christmas season consisted of children setting shoes in the window 13 days before Christmas. That’s when Icelandic Yule Lads — basically Icelandic Santa Clauses — from nearby mountains come into cities and villages to fill the shoes with gifts for deserving children.

Naughty ones get a mere potato.

Today, the veteran film, TV and stage actor with numerous acting and musical awards under his belt said he’s excited he gets to spend the month of December touring with his wife, Steinunn Olina (an actress, writer and producer) and their four children.

Children in the audience, meanwhile, give him a thrill as an actor when they respond to the Grinch.

“The children have to help the Grinch save Christmas nearly every night, and about 70 percent of the audience consists of children coming for the first time to the theater,” Karl said. “You really have to think about it every time you step out of that cave (on stage) … three months a year.”

Karl continues his run as Grinch with Big League Productions today through Sunday.

How the Grinch Stole Christmas! The Musical