Seven years after its major renovation, Myriad Botanical Gardens updates its children’s play space with equipment accessible to all. 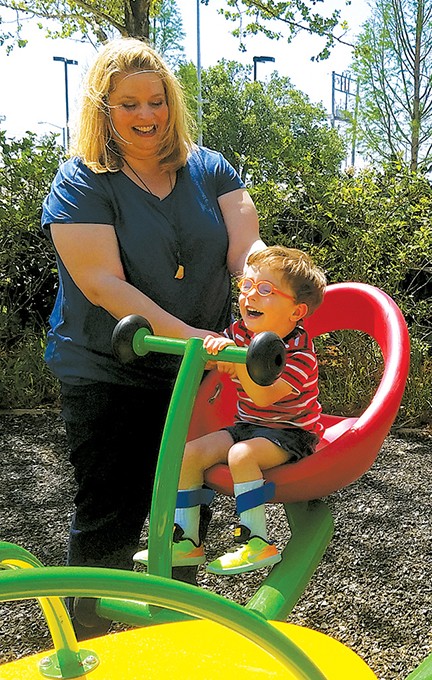 Playgrounds — they’re quintessential sites of childhood, places of laughter, fun and imagination. For frequenters of the Children’s Garden at Myriad Botanical Gardens, 301 E. Reno Ave., there’s now more for kids of all abilities to enjoy.

Through a $75,000 donation from Thunderbird Telecom Pioneers, Myriad Botanical Gardens installed three new accessible pieces of playground equipment: the AbilityWhirl, the Arch Swing and the We-saw™.

The donation allowed Myriad Gardens to put funds toward a project that had been on staff members’ radar for a while, said Maureen Heffernan, executive director of Myriad Gardens Foundation.

According to Heffernan, some of the previous play equipment had, through wear and tear, required frequent repairs and maintenance. Heffernan said that replacing play equipment is expensive, as the renovation process requires tearing out concrete bases and meeting certain codes, such as one that requires a play-and-pour surface, for safety reasons.

“We had those in the back of our minds to replace at some point, when we could raise the funds for it,” said Heffernan.

One day last fall, Heffernan received a call from Lonnie Austin, president of Thunderbird Telecom Pioneers, a nonprofit charitable organization founded in 1978. The organization is a subset of the national Pioneers group, which featured Alexander Graham Bell as its earliest member. The group got its current name in 1995 after AT&T split from Bell System, dividing manufacture and supply lines.

The Oklahoma chapter consists of mostly retired workers who raised money through events such as bake sales and garage sales, Heffernan said. Thunderbird Telecom Pioneers had raised $75,000 that they wished to donate as a legacy project, wanting to see the money put to good use.

The Pioneers approached the Myriad Gardens about potential project ideas. After a few weeks, Heffernan said they responded with multiple proposals, one of which addressed renovating and replacing the equipment in the Children’s Garden.

“That’s the one that really caught their attention,” Heffernan said. “Once they said they liked that idea, we got busy and researched different types of play equipment that we thought are accessible and that would be fun to add.”

Myriad Gardens focused on equipment that the Children’s Garden lacked, such as a swing, teeter-totter and merry-go-round. Several factors, such as safety, accessibility and compliance with code, informed their choices.

“We have to make sure that what we’re picking and where it’s being placed would meet these requirements,” Heffernan said.

With the need established and a donor ready, Heffernan said the connection with Thunderbird was especially fortunate.

Myriad Gardens gave its final proposal to Thunderbird Telecom Pioneers, which officially presented a check Dec. 7, 2017. Myriad Gardens ordered play equipment and began to prepare for the renovation and installation, but Heffernan said they had to wait until the weather warmed up to put in the play-and-pour surface.

As the weather warmed, the Children’s Garden closed in order to complete the project. The installation’s cost ended up being slightly more than $75,000, but Heffernan said her staff, which she called “the best in Oklahoma City,” helped reduce the cost.

“We took out the existing equipment, we excavated this play-and-pour surface around it,” she said. “We saved a lot of money doing some of that work ourselves, which helped make it affordable to do.”

The three new pieces of play equipment are accessible to all children.

When the new Children’s Garden was dedicated in an official ceremony April 30, representatives from Myriad Gardens and Thunderbird Telecom Pioneers were present, as were two guest groups from Special Care school and Children’s Center Rehabilitation Hospital.

“They were the first kids to try all of this out,” Heffernan said.

Children in wheelchairs were able to wheel right onto the AbilityWhirl and swing on the larger, cupped swings.

“It was just this moment of recognition — how powerful, making this available to kids,” Heffernan said.

The dedication ceremony also showed how everyone — younger or older — can enjoy the spaces of an accessible public park.

“The fact that these retired people are giving this gift to the younger generation, it was just a lovely balance,” Heffernan said.

In addition to installing equipment that’s accessible to individual children, regardless of ability, Heffernan also said that multiple kids can play on the new installations simultaneously.

“In our park, we get lots of kids all the time,” Heffernan said. “[With the new equipment,] kids interact more and make friends and talk and socialize. It’s a good way for kids to mix and play together.”

“We have to keep our Myriad Gardens really strong, with continual improvements and some new features,” Heffernan said. “With anything, with any cultural institution, you have to always be enhancing it and improving it in different ways, big and small. It keeps people coming back, and it keeps it relevant.”

Heffernan said that Oklahoma City itself is continually improving and that Myriad Gardens wants to remain relevant and accessible to all.

“We always want to be as good and enhanced and as fresh as possible,” she said.