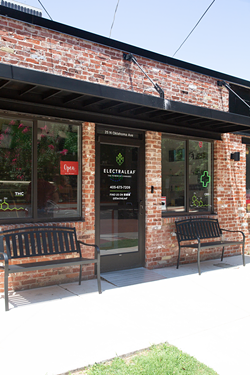 The first Oklahoma High Times Cannabis Cup was a muddy and sweltering affair attended by tens of thousands of people. This year, the awards ceremony was two dudes livestreaming from a couch, which definitely felt more like the right vibe.

Of the 10 categories, the clear winner was one brand family. ElectraLeaf; its grow operation, ALTVM; its Crispy’s and Swerve edibles; and the soon-to-be-launched Sweet Stuff line took 10 awards, either garnering the cup or a second-place finish in eight of them.

The easier way of putting it is that it did not place in the pre-roll or hybrid flower categories, which it also entered.

“I was shocked,” co-owner Pedro Sotomayor said. “We hoped and expected to win something because we were really proud of the entries that we put in, but to win 10 was a blessing and a testament to all the hard work we’ve put over the years. It was definitely a lot of hard work, even getting all that ready just to put it in. We have specialists, you know, in every department that do what they do really well. And we all come together as a team to bring it all to market.”

He said a large number of patients do not even realize that all of those products actually belong to the same cannabis brand family.

“People that know just know by chance or so to speak,” he said. “We don’t necessarily always advertise it that way. But really, we just hope people follow the quality.”

While ElectraLeaf is the brand that took the topicals cup, it also won a medal in the category for its line of women’s products soon to be released.

Sweet Stuff will also have pink and rose gold vape carts, among other products.

“We’re also going to be donating a portion of the profits of that brand to organizations that support women’s rights and women’s equality,” Sotomayor said.

This month, Crispy’s has released its Ruffled Cereal Bar, which is ridged potato chips and marshmallow drizzled with chocolate. Meanwhile, the Swerve brand, which took second place in food edibles for its Lights Out Indica & Melatonin Gummies and second place in non-food edibles for Cherry Cough Drops, is expected to release a line of cartridges in August.

Still with me? Got all that straight? Good. Because I’ve saved the best for last.

ElectraLeaf and ALTVM have also forged a deal with the popular California brand Cookies.

“We are in a partnership with Cookies right now, and we’re going to be growing a bunch of their stuff,” ALTVM grower Dave Dodson said. “We have their first batch in flower. Should be a very small, limited release dropping sometime in late summer, early fall.”

So in addition to growing the Cannabis Cup-winning ALTVM strains, he is also tending to those Cookies strains in their new 9-acre, 70,000 square feet greenhouse. Between the Cookies and ALTVM strains, they currently have about 10,000 live plants. The ability to grow an unlimited number of cannabis plants is what enticed Dodson, who has been growing medically for a decade, to sell his company and move to Oklahoma from Michigan.

Many of those plants are grown in a building attached to the new ElectraLeaf location in Edmond as well.

“Our new dispensary is there as well. It’s right at the grow,” Dodson said. “If you ever want to get the freshest stuff, come right to the source.”

The Edmond location, 225 Garage Drive, is now open but is currently only providing curbside service.

“I’m not here to say we’re the best. I just say we’re among them,” Sotomayor said. “The best is an opinion, and so is the Cannabis Cup, but at the end of the day, the people of Oklahoma spoke.”