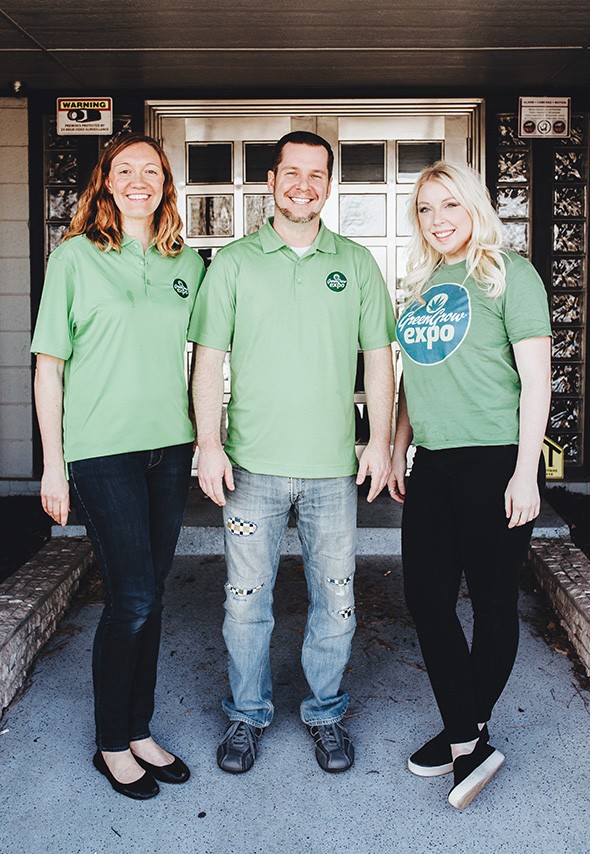 Co-organizer Reese “Ric” Higbie met Wright about 15 years ago in another enterprise. They hope the expo becomes an annual event.

“People are so hungry for education, and it’s new, and there’s a lot of new businesses coming into the industry and stuff like that,” Higbie said. “So we just saw it as an opportunity.”

Higbie, an on-air radio personality in Oklahoma for decades, broke his neck in 2006.

“The doctor said I would never walk again, and I can walk, but it’s not great,” he said. “I use a walker and a cane occasionally to get around, but the bottom line was I’m just tired of opioids. They never give me any complete pain relief, so I was looking for other options. And so I’m trying to become a cannabis advocate or a patient advocate for cannabis.”

On Saturday morning, five doctors will also be on hand to provide free recommendations for VIP ticketholders on a first-come, first-served basis for the first 200 potential patients.

“All the rest outside of what we can do for free that day will be only $99, which is a lot lower than what is out there,” Wright said. “So that’s kind of a way to uplift the community and also get back to raising the patient numbers. We’re going to guarantee 200. I’m a big under-promise, over-deliver guy.”

"THC can’t be at the show. They don’t allow smoking at the State Fair, so it’s not a big smoke-off."—Reese Ric Higbie tweet this

Local professionals in the cannabis industry and experts from other states with legalized medical and recreational cannabis will be on hand to lend advice.

“Not to come in and say Oklahoma doesn’t know what it’s doing at all, but to have people that say, ‘Man, we watched some people crash and burn in our state because of [lack of] compliance. And here’s what you could learn from that,’” Wright said. “So basically, taking the wisdom from early adoption states and bring that into Oklahoma so there’s less pain for entrepreneurs and more safe, legal access for patients.”

About 100 brands are participating, spanning industry specialties such as accounting, law, security, supplies and banking.

“Over 70 percent of them are strong Oklahoma brands, and 25 percent to 30 percent are national brands that bring a lot of value,” Wright said.

There will be a business-to-business VIP area for networking with a bar serving cocktails, Higbie said.

Due to state law, no live plants or dried cannabis flower will be available or for sale at the event, but growers and dispensaries will be represented.

“We’re trying to focus on education and the industry and just opportunities for small business in Oklahoma, and we’re not at all featuring anything that has to do with THC. THC can’t be at the show,” Higbie said. “They don’t allow smoking at the State Fair, so it’s not a big smoke-off. ...  It is really, truly about education, the industry and patients.”

However, a virtual reality simulation of a commercial grow will be available so attendees can experience the next best thing to being there, Wright said. The simulation is included in the ticket price.

A shipping container environment will also be set up by Lucky’s Grow Supply to show how to grow in smaller areas. The expo also features live art and concessions.

“It wouldn’t surprise me if at Amazon and Walmart at some point it was available,” Higbie said. “I hope not. I want to keep it as a local business because it’s created a ton of new businesses and a ton of new jobs and it’s a really exciting industry. That local hook to it was important to us, so being local, being first and being big or as big as we could be at the time was important, so we’re excited. I hope we get a lot of patients. I know it’s difficult because it’s difficult for me. I’ve got my electric chair charging in the wall right now and I’ll be rolling around all over that place. I hope they come because I think we’ve got a lot to offer. It seems like there’s a little something for everyone.”

“Warehouses are filling up and leases are going out and LLCs are being formed and taxes are being paid and the black market is coming into the open,” Wright said. “Everybody is benefiting from this in the state of Oklahoma, whether you voted for it or not.”

Day passes are available for $21, and a two-day VIP pass that includes entry to one of six expert-led classes is $42.

Individual classes are $49, or $99 for all three classes on either Saturday or Sunday. An all-access pass for both days of classes is $169 and includes a free VIP upgrade.