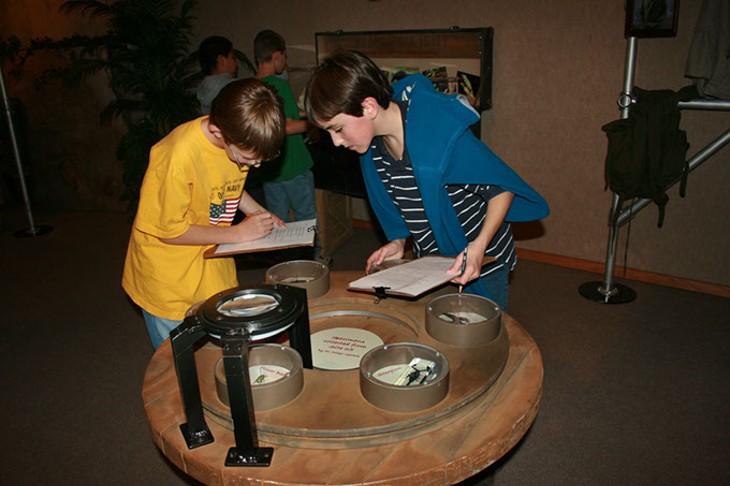 Sam Noble Museum needs help tracking down missing archeologists last seen researching a medallion of Mayan origin. If you have a keen eye and enjoy contemplating clues, you might be able to solve the Mystery of the Mayan Medallion.

The interactive exhibit at the museum, 2401 Chautauqua Ave., in Norman transports visitors to the jungles of Mexico and the site of the aforementioned dig. Children and young adults are the primary educational focus.

“The exhibit is basically providing an immersive experience for primarily kids, elementary school, middle school, maybe high school as well,” said Marc Levine, museum curator of archeology. “The premise of the exhibit is you walk onto an archeological site and the excavations there have been interrupted for some reason and you don’t really know what those are.”

The Mayan civilization began approximately 2000 B.C. and eventually stretched across southern Mexico and the Central American countries of Guatemala and Belize as well as portions of Honduras and El Salvador. The civilization crumbled when the Spanish Empire colonized the region in the 16th and 17th centuries. The exhibition illuminates the Maya at their peak.

“The exhibit highlights Mayan civilization of the classic period, which is from the year 200 to about 900 of the Common Era,” Levine said. “That’s often thought of as the fluorescence or the height of Mayan civilization. The Maya are really well known for their architectural prowess, like their pyramids, temples, ball courts and large plazas. They’re also known for their striking artistic style.”

Mystery of the Mayan Medallion incorporates aspects of this time period into the exhibit. The culture’s sophisticated hieroglyphic writing system plays an integral part in the clues.

“In addition, the Mayan are also famous for coming up with the most sophisticated written script in the new world,” Levine said.

Other aspects of the exhibit include an observatory with constellations and a jungle with sounds of birds and wild animals. Many clues will be hands-on, asking visitors to use creativity and judgment to understand the circumstances of the mystery.

“There’s another area where you come upon a tomb that is in the process of being excavated and you can see the bones,” Levine said. “You’re prompted to examine the replicas to see if it’s male or female or if there is evidence of trauma or violence.”

The organization of the exhibit allows visitors to experience the mystery at their own leisure, giving them the freedom to learn by the lure of curiosity.

He said that the Maya continue to exist, as there are 3 to 4 million speakers of the Mayan language in the world. The connection touches closer to home more than many realize.

“The Mayan people continued to thrive,” Levine said. “There are Mayan speakers in Oklahoma today who live here, speak Mayan languages and continue that connection to this past.”