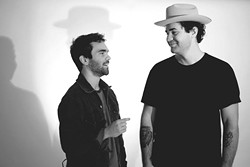 There is a lot a teenage musician can gain from a summer spent busking streets. Playing experience and the chance at earning extra spending money are obvious reasons for doing so, but brothers Bronson and Preston Taalbi picked up more than change playing Latin acoustic guitar duets on the Third Street Promenade in Santa Monica, California.

One never knows whom they might encounter on the streets. Sometimes touring bands pass by and ask buskers to play at their gig that night. And sometimes, with some extraordinary luck, someone with an in at one of the most celebrated television series in history hears you and helps get one of your songs broadcast into millions of living rooms across the planet.

Bronson Taalbi was only 16 when “Freestyle,” his Flamenco-inspired instrumental jam with brother Preston, then 14, first aired on an episode of the hit AMC drama Breaking Bad. The series earned acclaim for many of its creative aspects, including its score and song selection. “Freestyle” was used in the season four episode “Face Off” during a montage depicting main characters Walt and Jesse destroying the high-tech meth lab in which they had been working.

Bronson Taalbi, now 23, has ventured beyond the world of acoustic Latin music. He brings his folk-rock and alternative-country project Bronson Wisconsin to Oklahoma 8 p.m. Sunday at Red Brick Bar, 311 E. Main St., in Norman. Though the project is a duo with Preston, Taalbi is performing solo on this tour.

Getting a song on a major TV show pays well and leads to a spike in iTunes sales, Taalbi said in a recent Oklahoma Gazette interview. It also leads to other future TV opportunities. The Taalbi brothers had another song featured on ABC’s Dancing with the Stars.

“I don’t think I would have discovered that whole world of music, like licensing, until maybe a few years from where I am now — maybe my late 20s,” he said.

Taalbi grew up the second youngest in a Madison, Wisconsin, family that included nine total siblings. With Preston, his younger brother, he spent Wisconsin’s snowy, frigid winters playing their older siblings’ hand-me-down instruments together in the basement.

Fans of “Freestlye” should not dive into Bronson Wisconsin expecting similar instrumental dance grooves, though it is unlikely the edgier rock project will leave them disappointed. The duo released its Ugly EP in June, featuring the aggressive, upbeat title track in the vein of AC/DC as a bold take on the state of the music industry. Taalbi’s vocals are ripe with passion and energy — impressive considering his instrumental-only background.

Working with Preston has been an ideal arrangement for Taalbi so far. He said finding solutions for musical dilemmas is much easier with a family relation than it would be a friend or acquaintance.

The bond has led them to great things so far. That — and maybe a little more luck — will continue to carry them into the future. Visit bronsonwisconsin.bandcamp.com.